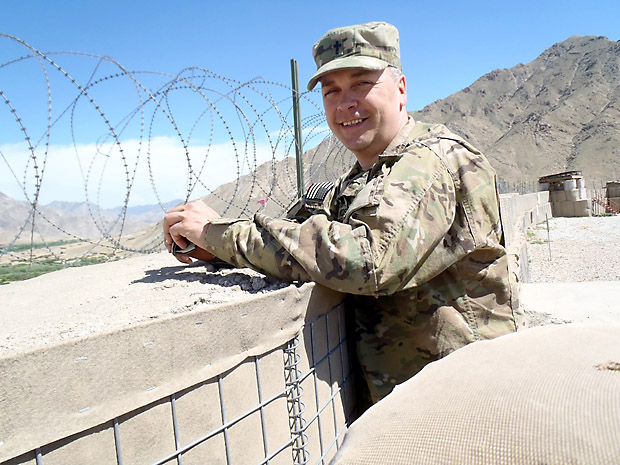 Father Stephen McDermott, a priest of the Archdiocese of Philadelphia and a U.S. Army chaplain, surveys the landscape in Afghanistan, where he served for the last year, earning the Army's Bronze Star. 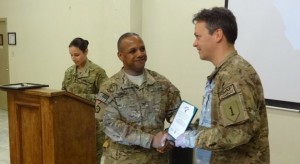 Father Stephen McDermott, a captain in the Army, received the Bronze Star and citation from his commanding officer for meritorious service in Afghanistan.

After Mass at a typical parish, it’s fellowship over coffee and donuts. But for troops stationed in Afghanistan, after Mass it’s cigars smoked down to the nub.

Father Stephen McDermott, a priest of the Archdiocese of Philadelphia and a U.S. Army chaplain who recently was awarded the Bronze Star Medal for his service in Afghanistan, just completed a year-long tour of duty in the country. He recalls how after the Sunday evening Mass, about 25 soldiers would gather for a smoky, improptu catechetical session.

“We’d just sit around and burn down a cigar, and it was one conversation: ‘Father, what do you think about this or that?’ They would come with their questions, and that was just a golden time of doing that.”

He promoted the practice even in small outpost bases when he stayed overnight. “I would post a sign saying, ‘Mass at this time followed by Holy Smokes,’” he said.

Much of Father McDermott’s time is spent ministering to Catholics and anyone else at the sprawling Bagram Air Force Base in Afghanistan, where tens of thousands of service personnel and civilians live and work.

His “parish” is hardly typical, but it does include much of the ministry performed by any parish priest.

(See a photo gallery of scenes from Father McDermott’s tour of duty in Afghanistan.)

At a chapel used by people of all faiths, he celebrates up to seven Masses on a weekend plus daily Mass and weekly eucharistic adoration and confessions. He even leads the Rite of Christian Initiation for Adults (RCIA) program, a women’s group and Bible study sessions.

“One of the things I always try to do no matter where I am – my first three years were in Germany – is trying to create a parish atmosphere for these people, both military and civilian alike, so they are connected somehow to the parish back home,” he said.

Father McDermott is a native of St. Joseph Parish in Warrington and graduated from Temple University before entering St. Charles Borromeo Seminary and ordination as a priest in 2003. He has risen to the rank of captain since joining the Army chaplaincy in 2008.

He began his deployment to Afghanistan in April 2012, mostly ministering at Bagram. But around Christmas time last year he entered a “battlefield circulation” where he served soldiers in the field. Each weekend he arrived at a smaller facility known as a Forward Operating Base, by comparison approximately the size of the now-closed Willow Grove Naval Air Base, for ministry similar to that which he provided at Bagram but smaller in scale.

Once a month he also visited by helicopter numerous smaller posts outposts manned by soldiers serving in rotations that allowed only a third of them the opportunity for Mass with the chaplain.

“Even with me going there once a month, they can’t even get to Mass when the priest is there,” said Father McDermott. “So when they do get a chance to go to Mass that is such a big thing for them, for those whose faith is important to them.”

The chaplain recognizes the old adage that “there are no aetheists in a foxhole” no longer applies on the modern battlefield.

“Unfortunately that’s not the case now,” he said. “A lot of people will have little or no faith. But those who are Catholic and practicing their faith, both military and civilian, that was so huge for them to be able to experience the sacraments.

“Those who take their faith seriously, it is such a blessing for them to see a priest. When you just sit and talk to soldiers, they have such an admiration for the chaplaincy because they know we’re there for them.”

The Army too has taken notice of Father McDermott and cited both his organizational skills and leadership of the chaplaincy at Bagram and his service on the battlefield as justification for the Bronze Star. (See the official narrative accompanying the award of the medal.)

“He is a soldier’s chaplain who is equally capable in a garrison ministry setting and in the most austere and dangerous locations. His efforts in revamping  the Enduring Faith Chapel (at Bagram Air Base),  building a community of faith, planning seasonal events, and instilling spiritual resiliency within Service Members and authori zed civilians were done flawlessl y,” it read.

For Father McDermott, the award recognizes not so much as what he is doing, but what God is doing among men and women in the most difficult circumstances.

“I have encountered a lot of people who were away from the Church and the sacraments for years and God has used this opportunity of the deployment to bring them back to church because at any moment there could be an IDF” – indirect fire, or a rocket attack, he explained. “You have no idea when it’s coming. So you’re living with that, you’re facing death every day.”

One of the most wrenching duties Father McDermott has performed was helping to carry badly wounded soldiers on stretchers off the giant C-130 transport planes and into the base hospital.

“You see these kids coming in missing arms and legs, burned faces. It affects you,” he said. “You’re there for them, you listen to them, you talk to them when they can. A lot of them are so angry because of what happened to them, and you’re just trying to be Christ to them in that situation.”

Not that the priest chaplain is unaccustomed to infirmities himself. Last June after playing in a good-will game of soccer with Afghan soldiers, the 45 year-old Father McDermott tore a ligament in one knee.

Though he needed a brace on the knee while carrying 50 pounds of equipment during his rounds on battlefields, he persevered until returning to the states in early April to Fort Belvoir, an Army hospital in Virginia, for surgery and recuperation.

He is seeing soldiers in the hospital with less serious wounds perhaps than those he’d witnessed on stretchers at Bagram, but he is familiar with the men’s interior, psychological damage as well.

“We call it the invisible war that they’re about to endure right now,” Father McDermott said.

The priest is most impressed with the high level of care wounded service personnel receive. “I wish people would realize how well the government is taking care of these wounded soldiers,” he said. “They take tremendous care of (them) here.”

Father McDermott does not know if he will be redeployed in the future to Afghanistan. If so, he will again ask the friends and family members who want to send him candy, shampoo or other small items to remember what he really needs as a means of community building and evangelization: a box of cigars that he can pass out to the soldiers.

“I never realized the power of a cigar when it comes to ministry,” he said. “When I was on battlefield circulation, whether (the soldiers) were Catholic or not, I would walk into a (headquarters) with a box of cigars like giving out candy, and you just see the guys’ eyes light up. They loved that.”

Of his decorated tour of duty to his parish community in far-off, war-torn Afghanistan, Father McDermott considers it “a tremendous honor for me personally to serve these brave men and women. And I love them dearly.”