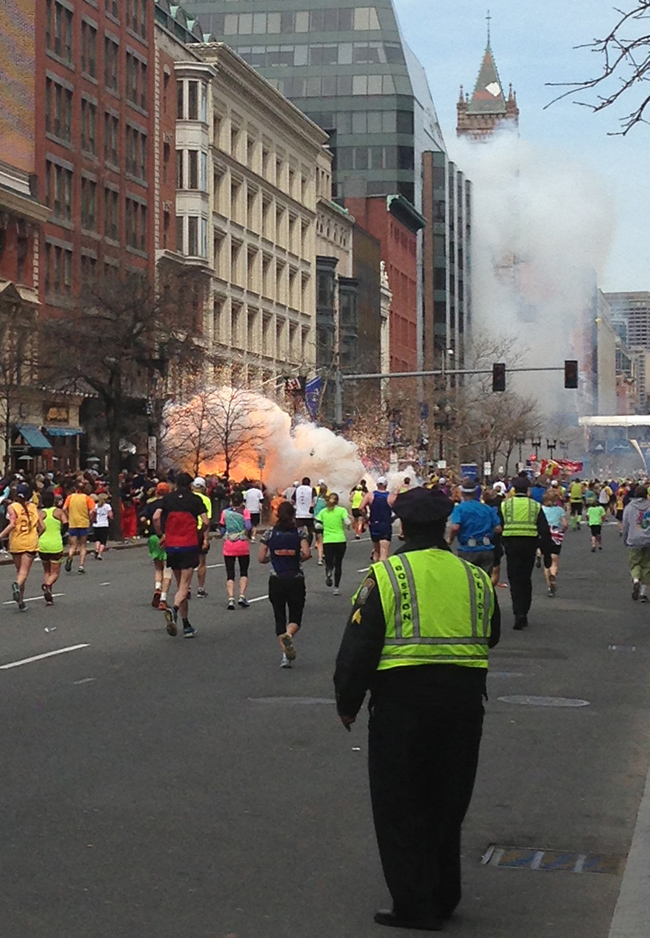 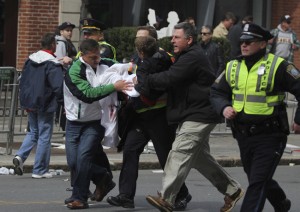 An injured victim is carried from the scene of an explosion at the Boston Marathon April 15. (CNS photo/Daily Free Press/Kenshin Okubo, Boston University handout via Reuters)

UPDATE — BOSTON (CNS) — Within hours of two explosions taking place near the finish line of the Boston Marathon April 15, Cardinal Sean P. O’Malley sent a message of prayer and support for those injured, their loved ones and those who experienced the trauma of the tragedy.

“The Archdiocese of Boston joins all people of good will in expressing deep sorrow following the senseless acts of violence perpetrated at the Boston Marathon today,” he said.

Close to 3 p.m., the Boston Police Department reported that officers had responded to two large explosions along the Boston Marathon route that left three people dead, including an 8-year-old boy, and more than 170 wounded.

“The citizens of the city of Boston and the commonwealth of Massachusetts are blessed by the bravery and heroism of many, particularly the men and women of the police and fire departments and emergency services who responded within moments of these tragic events,” the cardinal said.

Many expressed fear the explosions, which were seconds apart, were carried out by terrorists, and AP reported that federal officials were treating the bombings as an act of terrorism.

As of early April 16, no one had yet stepped forward to claim responsibility for the act, which took place on Patriot’s Day, a civic holiday in Massachusetts that commemorates the first battles of the American Revolution.

“(They) are providing the leadership that will see us through this most difficult time and ensure that proper procedures are followed to protect the public safety,” Cardinal O’Malley said.

The cardinal also commended those who rushed to help at the scene of the tragedy.

“In the midst of the darkness of this tragedy we turn to the light of Jesus Christ, the light that was evident in the lives of people who immediately turned to help those in need today,” he said.

Cardinal O’Malley promised the Catholic Church’s support for other faith communities, promoting a message of hope in response to the tragedy.

“We stand in solidarity with our ecumenical and interfaith colleagues in the commitment to witness the greater power of good in our society and to work together for healing,” the cardinal said. 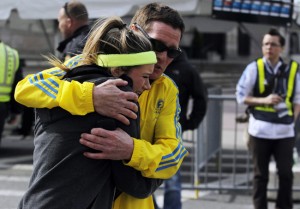 A woman is comforted by a man near a triage tent set up for the Boston Marathon after explosions went off at the 117th marathon April 15. (CNS photo/Jessica Rinaldi, Reuters)

New York Cardinal Timothy M. Dolan of New York, as president of the U.S. bishops’ conference, urged all “to pray for the souls of those killed, the healing of those injured and the restoration of peace for all of us unsettled by the bombings at a world renowned sporting event.”

“Our special prayers are with the Archdiocese of Boston and the people there who are working in the aftermath of this crisis to address those wounded in so many ways by these events,” he added in a statement issued a few hours after the explosions.

The “tragic end” to the marathon “reminds us all that evil exists and that life is fragile,” Cardinal Dolan said.

“The growing culture of violence in our world and even in our country calls for both wise security measures by government officials and an examination by all of us to see what we can personally do to enhance peace and respect for one another in our world,” he said.

In a press briefing President Barack Obama offered the nation’s condolences to the victims and their families, saying he was confident residents of the “resilient town” that Boston is would pull together to take care of one another.

“And as they do, the American people will be with them every single step of the way,” he said.

Obama urged people not to “jump to conclusions” as to the reason for the bombings and said a full investigation was well under way. “We will get to the bottom of this. … Any responsible individuals, any responsible groups will feel the full weight of justice,” the president said.

Investigators said April 16 that the bombs were made using pressure cookers filled with nails, ball bearings and metal shards. The FBI and police officials called on citizens for their help, asking people who were at the marathon to send them any video footage they had taken with their phones and cameras of the area where the bombs were detonated. Investigators hoped to find some clues about who the perpetrators may be by sifting through the video images.

An FBI agent said at a news conference that “the range of suspects and motives remains wide open.”

In Boston, archdiocesan spokesman Terrence C. Donilon said the pastor at Our Lady Comforter of the Afflicted Parish, Father James DiPerri, was to offer a special eucharistic Holy Hour with the rosary for the Boston bombing victims at Our Lady’s Parish in Waltham.

Massachusetts’ governor also called for prayer in a statement issued after the explosions.

“This is a horrific day in Boston. My thoughts and prayers are with those who have been injured,” Patrick said.

The public was invited to attend a Mass celebrated just after noon April 16 at the Boston archdiocesan Pastoral Center, followed by a eucharistic prayer service and recitation of the rosary. The prayer service included intercessions for those who died and those injured as well as the first responders and all mourning the tragedy.

Later in the afternoon, a broadcast of an archdiocesan radio program, “The Good Catholic Life,” addressed various aspects of how the Catholic community can help all those suffering and grieving.

That evening, local residents attended a candlelight vigil April 16 in the Dorchester section of Boston to remember young Martin and pray for his family.

Cardinal O’Malley was to host an interfaith prayer service April 18 at Boston’s Cathedral of the Holy Cross. The White House announced April 17 that Obama would attend the service. The CatholicTV Network in Boston planned to broadcast the Mass live. It was to be live streamed on the Internet at www.catholictv.com.

Among condolences sent by Catholic leaders to Cardinal O’Malley on behalf of the victims of the bombings were statements from Archbishop Richard Smith of Edmonton, Alberta, who is president of the Canadian Conference of Catholic Bishops, and Cardinal Francisco Robles Ortega of Guadalajara, Mexico, and Auxiliary Bishop Eugenio Lira Rugarcia of Puebla, Mexico, who are president and secretary-general, respectively, of the Mexican bishops’ conference.

In other statements, Chicago Cardinal Francis E. George assured Cardinal O’Malley that he and the people of the Chicago Archdiocese “will be praying for all those who died and were injured in this tragedy, along with their families, friends and neighbors.” Baltimore Archbishop William E. Lori offered the prayers of all in his archdiocese, too, “just as we pray too for an end to violence and terror throughout the world.”

PREVIOUS: Father of boy killed in bombings grateful for ‘thoughts and prayers’