Father of boy killed in bombings grateful for ‘thoughts and prayers’ 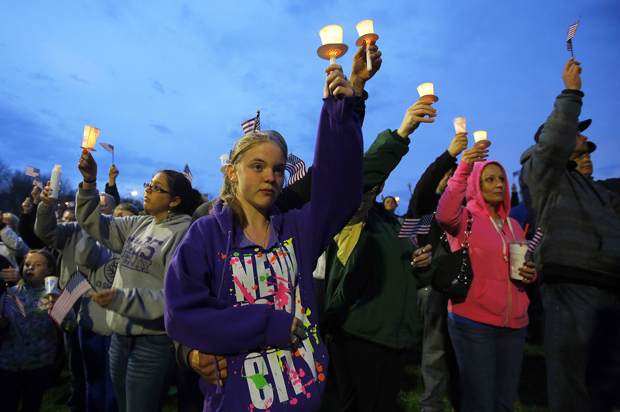 BOSTON (CNS) — The first name released of someone killed in the April 15 explosions at the Boston Marathon was that of 8-year-old Martin Richard, whose picture in newspapers showed him grinning broadly, apparently at his first Communion.

Two bombs that exploded near the end of the marathon route, about four hours into the race, left at least three people dead and more than 170 injured. The Dorchester Reporter, the local newspaper in Martin’s hometown, said his sister, Jane, 7, suffered a “grievous injury” to her leg and their mother, Denise, was critically injured.

In a statement released April 16, Bill Richard thanked family, friends and strangers for their thoughts and prayers for his family.

“My dear son Martin has died from injuries sustained in the attack on Boston. My wife and daughter are both recovering from serious injuries,” said the statement, published by the Boston Globe. “We thank our family and friends, those we know and those we have never met, for their thoughts and prayers. I ask that you continue to pray for my family as we remember Martin.”

The Richard family was described in the Dorchester paper and other publications as well-known and very involved in their community, in children’s sports leagues, local redevelopment and their church, St. Ann Parish Neponset, in the Dorchester section of Boston. 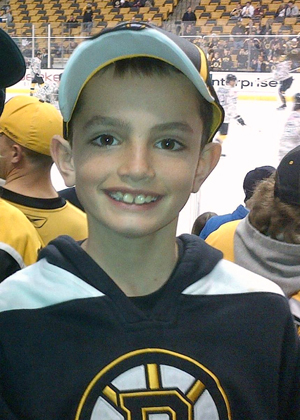 Martin Richard, who was killed in the Boston Marathon attacks, is shown in this undated family handout photo released April 16. The 8-year-old boy, a former student at Pope John Paul II Catholic Academy in Boston, was one of three people killed when two bombs exploded in the crowded streets near the finish line of the marathon the previous day. (CNS photo/courtesy of Bill Richard via Reuters)

An employee who answered the phone at the parish April 16 declined to talk to Catholic News Service about the family or how parishioners were responding.

A widely circulated photo of Martin shows him in a white suit and tie, with a gap-tooth grin, holding what apparently is a banner made for his first Communion last year. It has his name, a chalice, a loaf of bread and other symbols of the Eucharist.

As investigators pieced together clues and asked the public to send them any photos or video that might help, faith leaders reached out to a grieving, stunned city.

The two other people who died in the explosions were Krystle Campbell, 29, from Medford, and Lu Lingzi, 23, a graduate student at Boston University from China.

The routine schedule of four daily Masses was to proceed as usual at St. Francis Chapel in the Prudential Center, a large office building close to the bombing scene. A recording on the center’s phone advised people wanting to come to pray in the chapel that, because of street closures for the investigation, access was limited to doors on Huntington Street only.

Around the region, Catholic, Protestant, Jewish and interfaith organizations scheduled prayer services and vigils for the days after the bombings.

The public was invited to attend a Mass celebrated at 12:05 p.m. April 16 at the Boston archdiocesan Pastoral Center, followed by a eucharistic prayer service and recitation of the rosary. The prayer service included intercessions for those who died and those injured as well as the first responders and all mourning the tragedy.

The later afternoon broadcast of the archdiocesan radio program “The Good Catholic Life” was to address various aspects of how the Catholic community can help all those suffering and grieving.

Boston Cardinal Sean P. O’Malley, who was returning April 16 to Boston from a retreat in the Holy Land with several dozen priests, called St. Ann in Dorchester to share his concerns and prayers for the Richard family, according to a statement from the archdiocese. It also said he offered Mass that morning for the Richard family and all who were affected by the bombings.

In a statement the day before, Cardinal O’Malley expressed deep sorrow after the “senseless acts of violence.” He said the community was “blessed by the bravery and heroism of many” who responded to help the wounded.

NEXT: Boston cardinal says all feel ‘deep sorrow’ for victims of explosions