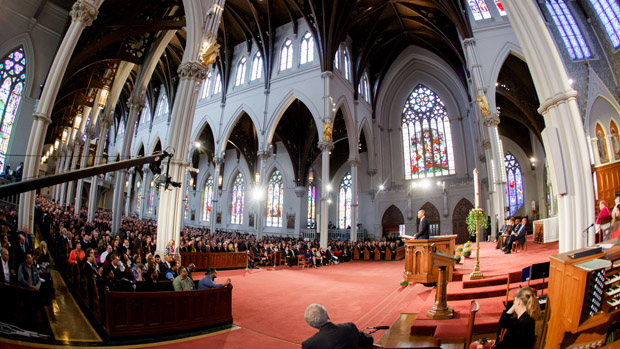 U.S. President Barack Obama addresses the congregation during the “Healing Our City” interfaith memorial service April 18 at the Cathedral of the Holy Cross for the victims of the Boston Marathon bombing. (CNS photo/Gregory L. Tracy, The Pilot) 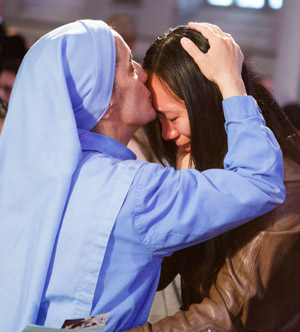 BOSTON (CNS) — In an April 18 interfaith prayer service, religious and political leaders emphasized the enduring strength of the people of Boston and urged them to find consolation and healing in their continued support of one another.

Boston Cardinal Sean P. O’Malley welcomed the congregation that packed the cathedral and told them the service was offered in solidarity with those who lost their lives or were injured in the bombings at the Boston Marathon April 15.

“We must overcome the culture of death and promote a culture of life,” he said, stressing that the blueprint for doing so was found in the passage on the beatitudes read during the prayer service.

The only way for people to “repair our broken world” is not as individuals but as a community and as a family, he said, noting that the tragedy provides “a challenge and an opportunity for us to work together with a renewed spirit of determination and solidarity and with the firm conviction that love is stronger than death.”

The cardinal, who returned to Boston April 16 after a retreat in the Holy Land, said the tragic event “shakes us out of our complacency and indifference and calls us to focus on the task of building a civilization that is based on love, justice, truth and service.”

The tragic bombing “shakes us out of our complacency and indifference and calls us to focus on the task of building a civilization that is based on love, justice, truth and service,” said Boston Cardinal Sean O’Malley.

Many of the religious leaders spoke of the goodness of humanity shown immediately after the bombs exploded not only in the actions of first responders, but with people helping each other and runners even going directly to hospital to give blood.

Rev. Taylor said those who helped others that day “made their own bodies sacraments of blessing.”

The leaders also spoke of the presence of evil but did not focus on it. Greek Orthodox Metropolitan Methodios said “evil reared its ugly head” the day the bombs exploded in Boston. Rev. Walker stressed that the city has always “faced darkness head on” and would use similar resolve to find healing from this tragedy.

She noted that when people ask “where was God?” amid such devastation, she does not have the answer but she does know “God is here in Boston now.”

Menino said Boston is a city with courage, compassion and strength that “knows no bounds” and emphasized that nothing could defeat the “heart of the city” or “tear down the city’s resilience.” 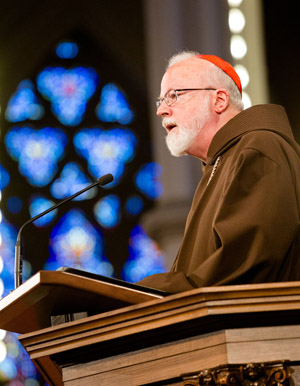 The city’s longest-serving mayor who has been in office since 1993, said the support Boston has received gives it the courage to say goodbye to those who were killed in the marathon bombings. He thanked everyone for prayers and wishes, New Yorkers in particular.

Gov. Patrick said that even though his faith tradition urges believers to always give thanks, he said he “wasn’t feeling it” the afternoon of April 15. In retrospect, he said he is thankful for the response of so many people from first responders to government leaders,

He said he is most thankful for those in Boston who “in the aftermath of such senseless violence, let their first instinct be kindness.”

“So, we will recover and repair,” the governor said. “We will grieve our losses and heal. We will rise and we will endure. We will have accountability without vengeance; vigilance without fear. And we will remember, I hope and pray, long after the buzz of Boylston Street is back and the media has turned its attention elsewhere, that the grace this tragedy exposed is the best of who we are.”

Obama said the marathon’s beauty was shattered by violence and noted that the prayer service was an opportunity to “come together to pray, and mourn, and measure our loss.”

The president offered prayers and support for those killed in the tragedy and offered words of encouragement for the wounded telling them: “As you begin this long journey of recovery, your city is with you… We will all be with you as you learn to stand and walk and, yes, run again. Of that I have no doubt. You will run again.”

He said the perpetrators of senseless violence fail to see that Americans find strength and power in their faith in each other and love for each other and for their country.

“And this time next year, on the third Monday in April,” he added, “the world will return to this great American city to run harder than ever, and to cheer even louder, for the 118th Boston Marathon.”

Contributing to this story was Carol Zimmermann in Washington.

NEXT: Texas responds to blast that casts wide destruction in small town