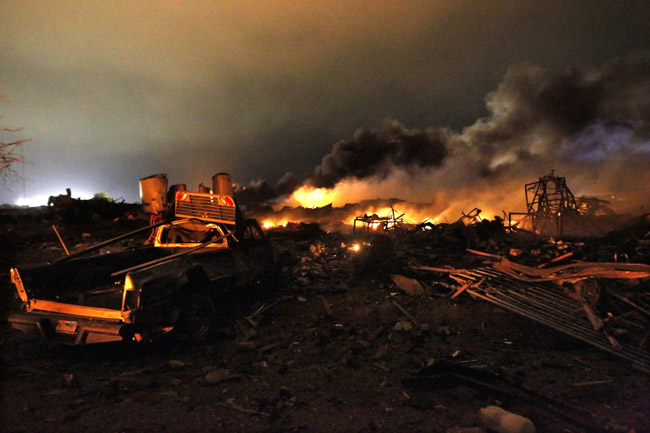 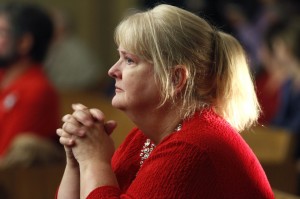 A woman prays during a candlelight vigil April 18 at the Church of the Assumption in West, Texas, in remembrance of those who lost their lives or were injured in the massive explosion at the area’s fertilizer plant. (CNS photo/Jaime R. Carrero, Reuters)

WEST, Texas (CNS) — Emergency personnel were carefully combing through blocks of wreckage in this town of 2,900 a day after a chemical fertilizer factory caught fire and exploded with the force of a small earthquake April 17, injuring perhaps hundreds and killing others.

Dozens of homes were destroyed in the explosion at West Fertilizer Co., a while after a fire of undetermined origin was reported. The shock wave was felt at least 50 miles away.

By the afternoon of the next day, authorities still had not given more than vague estimates of casualties — perhaps five to 15 people killed and at least 160 injured, at least 60 homes damaged or destroyed. Hospitals in Waco, a mid-size city about 20 miles away, reported receiving as many as several dozen victims each.

In a town with a strong Czech and German immigrant history, the 120-year-old Church of the Assumption Catholic Parish is one of the largest communities in West, with about 1,300 registered families. Located about a mile from the blast site, the property and its adjacent school, St. Mary’s, were undamaged. The property was being used by emergency personnel as a command center.

Father Ed Karasek, the pastor of 24 years, posted brief notes on the parish website, noting that “we have lost several folks dear to us and many, many more have lost a portion of or all of their possessions.” He also told Vatican Radio that in the close-knit town, everyone was coming together.

“Everybody is related to each other, and they are all supporting each other,” he said.

At Providence Healthcare Center in Waco, the Catholic hospital reported long lines of people waiting to donate blood, so many in fact, that immediate needs had been met.

Shannon Eckley, one of several chaplains on the hospital staff, said the entire staff rushed in to work April 17 and everyone kept busy as they tried to meet the pastoral needs of more than 60 injured people and their families.

Eckley, a nondenominational Protestant chaplain, said that as a non-trauma hospital, Providence treated people with less serious injuries. She said much of the chaplains’ time was spent trying to help people locate their family members and deal with the immediate shock of the disaster.

“We did a lot of compassion care,” Eckley explained. “A lot of people, besides the physical injuries, lost their homes, their vehicles.”

“Today, we’re just letting people, talk,” she said. That includes hospital employees who live or have family members in West.

Staff at Hillcrest Hospital in Waco, which treated more than 100 victims from West, said late April 18 that people with minor injuries were still trickling in for treatment. In a press conference, they said about 60 Hillcrest employees live in West.

In a statement, the diocese said Bishop Vasquez would visit West April 19, and on April 21 would celebrate 10:30 a.m. Mass there. Masses at St. Mary Cathedral in Austin April 18 and at the diocesan pastoral center were celebrated for the people of West.

Bishop Vasquez also approved the use of a special weekday Mass for the people of West and sent a prayer around for parishes to use the coming weekend.

The diocesan statement said that after letting the American Red Cross provide immediate disaster relief, Catholic Charities of Central Texas and the Society of St. Vincent de Paul would take on cases referred to them by the Red Cross for long-term assistance, such as distribution of furniture and household goods.

Bishop Vasquez asked parishes to take up a special collection for assistance to West. The diocese also was arranging for staff from its Office of Family Counseling and Family Life to evaluate the need for professional counselors.

The U.S. Geological Survey said the explosion caused a tremor equivalent to an earthquake of 2.1 magnitude, noting that seismologists only measure ground shaking, not the air wave, making the measurement substantially less severe than the event actually was.

The town of West is widely known for its annual Czech and Polka Festival each Labor Day weekend, and its traditional Czech restaurants and bakeries.

President Barack Obama in a statement offered his prayers and described West as “a town that many Texans hold near and dear to their hearts,” and said federal agencies were working make sure needs were being met there.