Build ‘civilization of love’ in response to bombings, cardinal urges 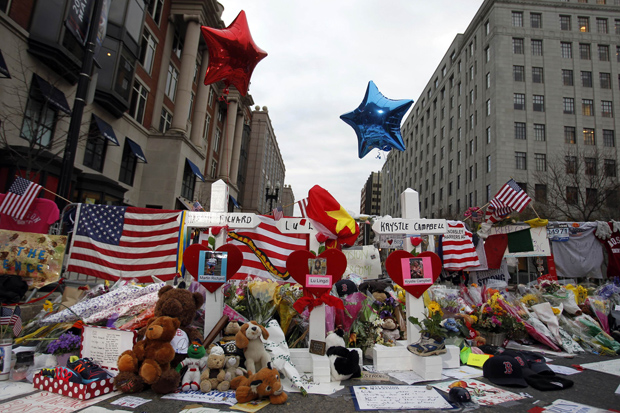 Three crosses for each of the three people killed in the Boston Marathon bombings are seen at a makeshift memorial on Boylston Street in Boston April 18. (CNS photo/Jessica Rinaldi, Reuters)

BOSTON (CNS) — Even though “the culture of death looms large” today, the light of Christ the Good Shepherd “can expel the darkness and illuminate for us a path that leads to life, to a civilization of solidarity and love,” said Boston Cardinal Sean P. O’Malley.

“I hope that the events of this past week have taught us how high the stakes are,” the cardinal told the congregation at the Cathedral of the Holy Cross April 21, referring to the Boston Marathon bombings April 15 and the subsequent manhunt for the perpetrators.

“We must build a civilization of love, or there will be no civilization at all,” Cardinal O’Malley said in his homily at the Mass of the Good Shepherd, which he offered for the repose of the souls of those killed in the bombings and the subsequent manhunt.

Prayers were also for those physically injured and “for the brave men and women who saved countless lives as first responders.”

The attack left three people dead and more than 170 people seriously injured. By April 18, the FBI had identified two brothers who came to the United States years ago as from the Russian region of Chechnya — Tamerlan Tsarnaev, 26, and Dzhokar Tsarnaev, 19.

The two men terrorized the Boston area overnight April 18. While they were on the run, they fatally shot Officer Sean Collier, who was with the campus police force at the Massachusetts Institute of Technology. Tamerlan was shot dead by police, and by the evening of April 19 they apprehended Dzhokar, whom they found hiding in a boat in a backyard. He was severely wounded and as of April 22 remained hospitalized in serious condition.

In his homily, Cardinal O’Malley talked of how Jesus, before he was crucified, said: “They will strike the shepherd and the sheep will scatter.”

“That is what happened to his disciples after the Crucifixion, as they scattered in fear, doubt and panic,” the cardinal said.

“On Easter, the Good Shepherd returns to gather the scattered; Mary Magdalene in grief, Thomas in doubt, Peter in betrayal,” he continued. “We too are scattered and need the assurance of the Good Shepherd, who lays down his life for us, who comes to gather us in our scattered in our brokenness and pain, scattered by failed marriages, lost employment, estranged children, illness, the death of a loved one, soured relationships, disappointments and frustrations.”

When the bombings occurred and in the days that followed “we are all scattered by the pain and horror of the senseless violence perpetrated on Patriot’s Day,” Cardinal O’Malley said.

He recalled that April 14, the Sunday before the marathon and the Massachusetts civic holiday on which it always takes place, the priest saying the 11:30 a.m. Mass at the cathedral “led a special blessing for the many runners who participated in the Mass.”

A week later, the congregation included some of those injured in the attack and “those who witnessed the terrible events that unfolded at the finish line of the marathon,” Cardinal O’Malley said.

“Everyone was profoundly affected by the wanton violence and destruction inflicted upon our community by two young men unknown to all of us,” he said. 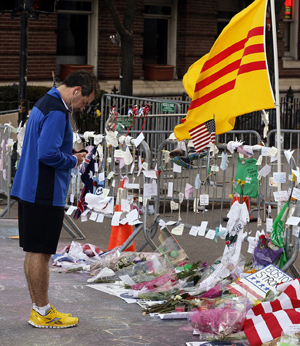 An early morning runner pauses April 21 to say a prayer at a memorial to the victims of the Boston Marathon bombings near the scene of the blasts on Boylston Street in Boston. (CNS photo/Jim Bourg, Reuters)

“It is very difficult to understand what was going on in the young men’s minds, what demons were operative, what ideologies or politics or the perversion of their religion. It was amazing to witness, however, how much goodness and generosity were evidenced in our community as a result of the tragic events they perpetrated,” he added.

In recent days, “we have experienced a surge in civic awareness and sense of community,” Cardinal O’Malley said. “It has been inspiring to see the generous and at times heroic responses to the Patriot’s Day violence.

“Our challenge is to keep this spirit of community alive going forward. As people of faith, we must commit ourselves to the task of community building.”

He urged his listeners to heed what Jesus teaches in the Gospel — “that we must care for each other, especially the most vulnerable; the hungry, the sick, the homeless, the foreigner; all have a special claim on our love.”

“We must be a people of reconciliation, not revenge. The crimes of the two young men must not be the justification for prejudice against Muslims and against immigrants,” he emphasized. “The Gospel is the antidote to the ‘eye for an eye and tooth for a tooth’ mentality.”

He reminded them of the parable of the good Samaritan, a story, he said, “about helping one’s neighbor when that neighbor was from an enemy tribe, a foreign religion, a hostile group.”

“We know so little about the two young men who perpetrated these heinous acts of violence. One said he had no friends in this country, the other said his chief interests were money and his career,” Cardinal O’Malley said. “People need to be part of a community to lead a fully human life.

“As believers one of our tasks is to build community, to value people more than money or things, to recognize in each person a child of God, made in the image and likeness of our Creator.”

He added, “The individualism and alienation of our age has spawned a culture of death. Over a million abortions a year is one indication of how human life has been devalued. Violent entertainment, films and video games have coarsened us and made us more insensitive to the pain and suffering of others.

“The inability of the Congress to enact laws that control access to automatic weapons is emblematic of the pathology of our violent culture.”

He said “the innocent victims who perished this week — Martin Richard, Krystle Campbell, Lu Lingzi and Officer Sean Collier, will live in eternity.”

“Life is not ended, merely changed — that is the message of Easter. As (the Rev.) Martin Luther King expressed, ‘Death is a comma, not a period at the end of a sentence,'” Cardinal O’Malley said.

NEXT: Bishops: Immigration bill on right track, some changes sought