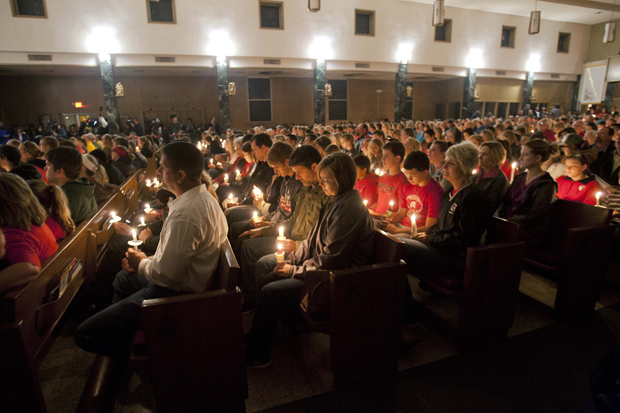 People take part in a candlelight vigil April 18 at the Church of the Assumption in West, Texas. (CNS photo/Jaime R. Carrero, Reuters)

WEST, Texas (CNS) — The small town of West has been flooded with donations, disaster response teams, volunteers, news media and, perhaps most importantly, prayers since an explosion at a fertilizer plant the evening of April 17.

The explosion killed 14 people and destroyed many of the homes within five blocks of the fertilizer plant. Though not all of the names of those who died have been released, the Waco Herald-Tribune newspaper’s accounting lists most of them as emergency responders, including volunteer fire department members.

Father Ed Karasek said the phone has not stopped ringing at Church of the Assumption Parish in West, where he has been pastor for nearly 25 years. The parish, which also has a Catholic school, St. Mary’s, is about a mile from the fertilizer plant and did not suffer much damage from the explosion.

Father Karasek said he had talked to people from all over the world in the days since the tragedy.

“I have answered so many questions, but everyone is praying for us,” he said.

On April 19, Austin Bishop Joe S. Vasquez visited Assumption Church for an interfaith service of remembrance for those who died. During the service, local clergy offered their reflections and their support for the victims of the tragedy. West sits on the northern edge of the Austin Diocese.

“This community has experienced a tragic event that has altered many lives,” said Bishop Vasquez. “We mourn the loss of your loved ones and friends and we continue to pray for the injured.”

After the service concluded, the church leaders gave blessings and warm embraces to family members and first responders.

“It was so touching for me to be with the people of West during this sad time,” Bishop Vasquez told the Catholic Spirit, newspaper of the Austin Diocese, after the service.

People throughout the region had personal ties to the disaster.

Peggy Pustejovsky, a member of Assumption Parish, was at her home about three miles outside of West when the explosion occurred.

“I heard a big boom and the lights flickered and when I looked toward town there was huge mushroom cloud,” Pustejovsky said. She immediately headed to town to help. The first place she stopped was the nursing home where her mother-in-law lives. Just before the explosion, emergency personnel who saw danger in the fire at the plant were trying to evacuate the home’s residents.

“There were so many people, young and old, who were helping,” she said. “We were lifting people in wheelchairs up and over debris. We knocked out what was left of the windows to lift people out on mattresses and get them out of the rubble.”

As she was helping, Pustejovsky, who is director of radiology at Providence Hospital in Waco, about 20 miles away, received a call from the Catholic hospital asking all available personnel to come to work. She said she knew she could not leave what she was doing, but heard stories the next day of how all of the hospital staff was lined up to help when the busses started rolling in with injured patients.

Providence treated more than 60 of the less seriously injured from West. 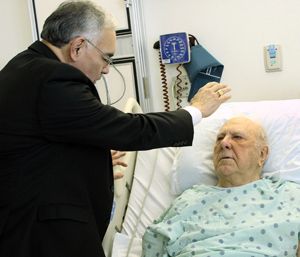 Bishop Joe S. Vasquez of Austin, Texas, blesses Louis Mynarcik, 87, at Providence Hospital in Waco, Texas, April 19. Mynarcik was a resident of the West nursing home that crumbled from the April 17 explosion at a nearby fertilizer plant in West that claimed the lives of at least 14 people and injured about 200 others. (CNS photo/Shelley Metcalf, Catholic Spirit)

“It was a miraculous coming together of staff, and within minutes of the first calls coming in, we were ready to go as a team,” said Brett Esrock, the president of the hospital. It received many of those injured when the nursing home crumbled from the impact of the explosion.

Bishop Vasquez visited two patients there April 19; both were expected to be released soon, according to their families.

The bishop returned to West April 21 to celebrate Mass at Assumption Church, which was full and more than 110 Knights of Columbus from across central Texas formed an honor guard. At least two of the first responders killed by the blast were members of the Knights of Columbus.

Knights from the councils at Baylor University in Waco and the University of Dallas joined volunteers in West over the weekend helping distribute relief supplies. The Knights reported that the local Council 2305 has more than 500 members.

The Austin Diocese received a fax from Pope Francis the morning after the explosion, as well as messages from Cardinal Timothy M. Dolan of New York, Cardinal Daniel N. DiNardo of Galveston-Houston, Archbishop Gregory M. Aymond of New Orleans and Bishop W. Michael Mulvey of Corpus Christi. In recognition of the town’s Czech roots, Cardinal Dominik Duka of Prague, Czech Republic, also sent a letter to the parish.

The letter from the Vatican said Pope Francis was saddened by the news of the destruction and conveyed “his heartfelt condolences to the civil authorities and the afflicted families. He prays for the eternal rest of the victims and implores God’s blessings of consolation and peace upon those who mourn and all who generously aid in the continuing work of relief.”

Ericka Sammon, the principal of St. Mary’s Catholic School in West, said the outpouring of volunteer help and resources the town has been amazing. She said she knows of 10 families from the school who lost their homes.

“We have had people from Dallas and from Austin who just got in their cars and drove to help,” she said. “They knocked on our door and asked, ‘What can we do?'”

Sammon said the town has been blessed with large amounts of donations of household goods and clothing, but that money is what would help the families that have lost homes the most.

“We want to help them with tuition and lunch fees and help them get back to normal,” she said.

West has a population of about 2,800 and Assumption Parish has about 1,275 families. The 120-year-old parish has a rich Czech heritage, thanks to the Moravian and German immigrants who settled in the town in the 1870s.

The Austin Diocese asked all parishes to take up a special collection for the people of West the weekend of April 20-21. The diocese, through the work of the Society of St. Vincent de Paul and Catholic Charities of Central Texas, will assist the town with long-term case management needs, including the distribution of furniture and household goods when homes are rebuilt, and counseling services.

Financial donations may be given to Catholic Charities of Central Texas at www.ccctx.org/disaster or the Society of St. Vincent de Paul at www.ssvdp.org. The Knights of Columbus in New Haven, Conn., announced April 18 it was accepting donations online at www.kofc.org/texas to help those in need and to supplement local efforts.

NEXT: Build ‘civilization of love’ in response to bombings, cardinal urges