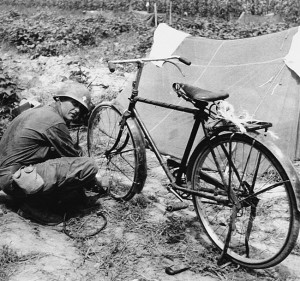 U.S. Army chaplain Father Emil Joseph Kapaun, who died May 23, 1951, in a North Korean prisoner of war camp, is pictured in an undated photo. (CNS photo/courtesy The Catholic Advance)

“He should have got it long time ago,” Joe Ramirez, a war veteran, told Catholic News Service in a telephone interview from Houston. He was baptized by Father Kapaun July 19, 1950, the day after their regiment had landed in Korea.

“He deserves about three or four of them,” another soldier-friend of the priest, Herbert Miller, told CNS.

Father Kapaun was born on Holy Thursday at 11:30 a.m. April 20, 1916, to two hardworking parents in a little farmhouse in Kansas. He grew up an ordinary child in ordinary times, but God was calling him to something greater.

“Now one remembers little things about him which were not significant then, but which might have let you know what sort of man he would be when the going was difficult,” Father Edward Malone, a Benedictine priest and professor, is quoted as saying in a 1954 biography of the priest written by Father Arthur Tonne.

When he walked into a room, Father Kapaun seemed to light up the room, fellow soldier Mike Dowe said in an April 4 interview in Rosslyn, Va.

Dowe retired as an Army colonel in 1970 and today is chief scientist at New Mexico-based Raytheon Ktech. He spoke to CNS while he was in the Washington area on business.

Shortly after the Korean War ended — an armistice was signed July 27, 1953 — Dowe wrote about Father Kapaun in a Saturday Evening Post article in January 1954. “By his very presence, somehow, he could turn a stinking, louse-ridden mud hut, for a little while, into a cathedral,” he wrote. Yet, he added, there was nothing “ethereal about him, nothing soft or unctuous or holier-than-thou.”

In the interview with CNS, Dowe said the priest used ordinary GI slang to communicate with the troops, and loved to talk about his mother’s good cooking.

Deployed to the Korean War, Father Kapaun spent almost a year ministering to the soldiers on the frontlines. When he was not dodging bullets to drag wounded back to the aid stations, the priest would “drop in a shallow hole besides a nervous rifleman, crack a joke or two, hand him a peach, (and) say a little prayer with him,” Dowe wrote in 1954. 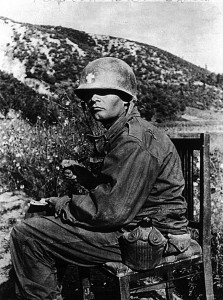 In his recollection of the chaplain, Miller told CNS: “He didn’t stop to ask if I was Baptist or what. He just did his job.”

One day, during the thick of the fighting, Miller was charged with the task of leading a platoon back to the headquarters. About halfway there, they were overwhelmed by a huge swarm of enemy soldiers.

“It was dark … but I saw a grenade and I couldn’t get away from it,” he said. The grenade exploded and seriously wounded him. Lying on the ground, he looked up just as a North Korean soldier pointed a pistol between his eyes, ready to execute him on the spot.

“The first time I saw (Father Kapaun) is when he come across that road and pick me up,” said Miller.

Captured almost immediately, the two were sent on a death march to a North Korean POW camp. The priest carried Miller about 30 miles through 20-40 below-zero temperatures, saving his life.

“He didn’t have to be a POW, but he stayed back” to take care of the wounded, Ramirez told CNS.

On the march, “leadership was manifest by example,” said Dowe, who first met Father Kapaun as he helped him carry a stretcher.

After the long and arduous death march, the soldiers were only faced with more insurmountable conditions in the filth and despair of the POW camp.

“When you’re in such a hopeless situation … the will to live means everything,” Dowe explained. “One night you give up and you’re gone in 24 hours.”

Father Kapaun not only instilled in the men a will to live, but also a loyalty to their country and to their principles.

“The Chinese hated him because they thought he had too much influence on the young guys,” said Ramirez.

In his article, Dowe wrote: “Above all, he urged them not to fall for the lying doctrines the Reds were trying to pound into our heads.”

The priest would go cabin to cabin, stopping in for a few moments to talk and pray with the wounded and dying prisoners.

“He would slip in the door, (pass) a pipe around, kneel down say a prayer for everybody not only Catholic but … whatever you were … (and) then he’d say, ‘Keep your chin up boys, because we’re going to come out of here,'” Miller told CNS.

Father Kapaun helped wash the clothes of the dying, brought water to the thirsty, cleaned and picked maggots or lice out of the wounds of those who could not do it themselves, and boiled water in a little piece of metal he had found so the prisoners could drink it and not get dysentery.

Sometimes he would even sneak into the warehouse to steal food for the starving men, explained Dowe.

With men falling sick all around him, Father Kapaun eventually got a blood clot that led to pneumonia and fever. However, he recovered from the illness just long enough for the North Koreans to whisk him off to their death house, where he passed away.

Dowe remembers the moment when they took him away. “We all said, ‘Hey! He’s getting better’ … but the soldiers came in with bayonets. Father said, ‘Hey, don’t fight!'” and then turning to Dowe, he said, “Mike, I’m going where I always wanted to go.” 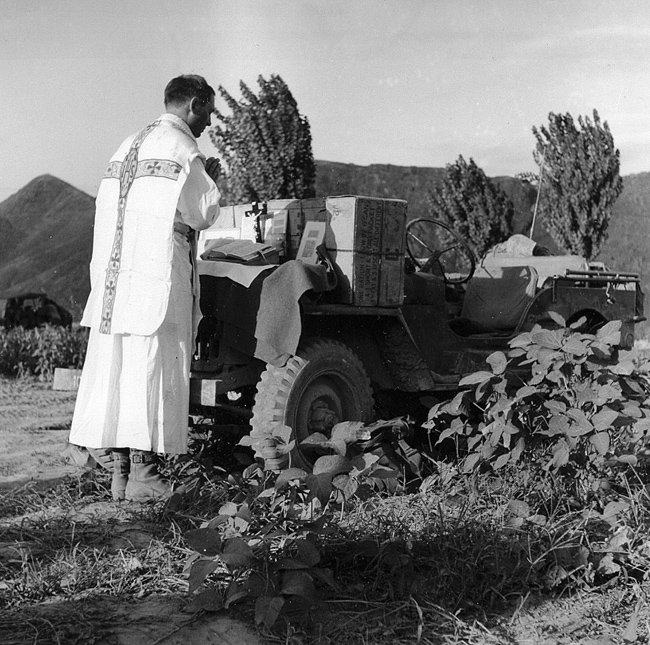 NEXT: ‘Shepherd in combat boots’ awarded Medal of Honor for Korean service