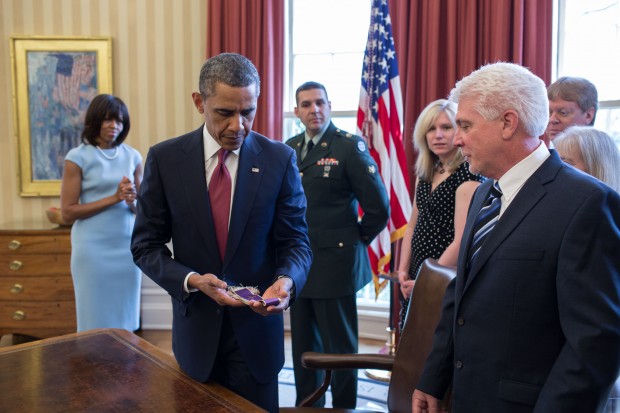 WASHINGTON (CNS) — A Catholic Korean War chaplain who selflessly pulled wounded men from enemy fire and helped his fellow prisoners of war keep a sense of hope was honored posthumously with the Medal of Honor, the highest military honor, in an April 11 White House ceremony. 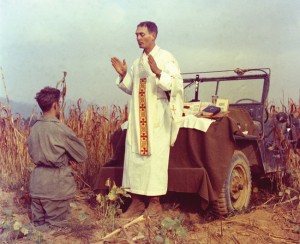 U.S. Army chaplain Father Emil Joseph Kapaun, who died May 23, 1951, in a North Korean prisoner of war camp, is pictured celebrating Mass from the hood of a jeep Oct. 7, 1950, in South Korea. He was captured about a month later. The Medal of Honor, the nation’s highest military award for bravery, will be awarded to the priest posthumously at the White House April 11. (CNS photo/courtesy U.S. Army medic Raymond Skeehan)

In paying tribute to Father Emil J. Kapaun, an Army captain, President Barack Obama told multiple stories of the “shepherd in combat boots” from Kansas who voluntarily stayed behind with the wounded to face certain capture, rather than evacuate when his division was overrun at Unsan, Korea, in November 1950.

“This is the valor we honor today — an American soldier who didn’t fire a gun, but who wielded the mightiest weapon of all, a love for his brothers so pure that he was willing to die so that they might live,” said Obama.

Father Kapaun received the Bronze Star before his capture and the Distinguished Service Cross after he died. Within the Catholic Church, he has an active cause for sainthood, having been recognized by the Vatican as a “servant of God,” a first step in the investigation of someone who is being considered for sainthood.

Some of Father Kapaun’s fellow prisoners, who walked out of their prison camp carrying a crucifix they’d fashioned to honor their deceased chaplain, were in attendance at the ceremony. The medal, given to members of the armed forces for distinguished gallantry above and beyond the call of duty in active service, was presented to Ray Kapaun, a nephew of the priest, who never knew his uncle.

Guests for the ceremony in the East Room of the White House included Father Kapaun’s extended family, military chaplains and other officers, people from his hometown parish, St. John Nepomucene Catholic Church in Pilsen, Kan.; and various members of the Archdiocese for Military Services including Auxiliary Bishop Richard B. Higgins, vicar for Veterans Affairs.

Also in attendance was Herb Miller, who as a sergeant in 1951, was injured when a grenade exploded near him. As Obama told the story, a Chinese soldier was about to execute Miller, when Father Kapaun stepped in to stop him. The priest then carried Miller and assisted other wounded prisoners on a lengthy march to a prison camp at Pyoktong. 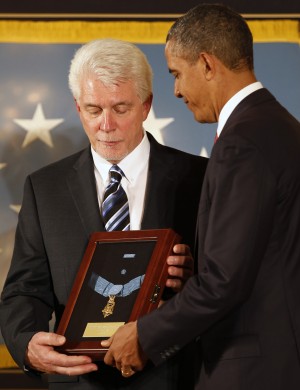 U.S. President Barack Obama presents the Medal of Honor to Ray Kapaun, who accepted it on behalf of his uncle, U.S. Army chaplain Father Emil Joseph Kapaun, at the White House in Washington April 11. The priest, who died May 23, 1951, in a North Korean prisoner of war camp, was honored with the nation’s highest military award for bravery. (CNS photo /Bob Roller)

“He carried that injured American, for miles, as their captors forced them on a death march,” said Obama. “When Father Kapaun grew tired, he’d help the wounded soldier hop on one leg. When other prisoners stumbled, he picked them up. When they wanted to quit — knowing that stragglers would be shot — he begged them to keep walking.”

Father Kapaun’s actions that day are what was being recognized with the Medal of Honor, Obama said, but he continued with stories of the priest’s selfless actions in the prison camp — helping smuggle in more food; giving away his clothes to freezing men; fashioning pots to boil water to battle dysentery; praying with the men in their huts; celebrating Easter Mass.

Obama said Father Kapaun’s background reminded him of his own grandfather’s.

“Now, I obviously never met Father Kapaun,” Obama said. “But I have a sense of the man he was, because in his story I see reflections of my own grandparents and their values, the people who helped to raise me. Emil and my grandfather were both born in Kansas about the same time, both were raised in small towns outside of Wichita.

“They were part of that Greatest Generation — surviving the Depression, joining the Army, serving in World War II. And they embodied those heartland values of honesty and hard work, decency and humility — quiet heroes determined to do their part.”

For the priest, he continued, that meant joining the Army in World War II and returning to military service after a two-year hiatus during which Father Kapaun earned a master’s in education at The Catholic University of America.

“After the Communist invasion of South Korea, he was among the first American troops that hit the beaches and pushed their way north through hard mountains and bitter cold,” Obama said. “In his understated Midwestern way, he wrote home, saying, ‘this outdoor life is quite the thing’ and ‘I prefer to live in a house once in a while.’

Suffering from an assortment of ailments, Father Kapaun died in that prison camp in Pyoktong on May 23, 1951.

NEXT: Rally shows range of issues central to immigration reform