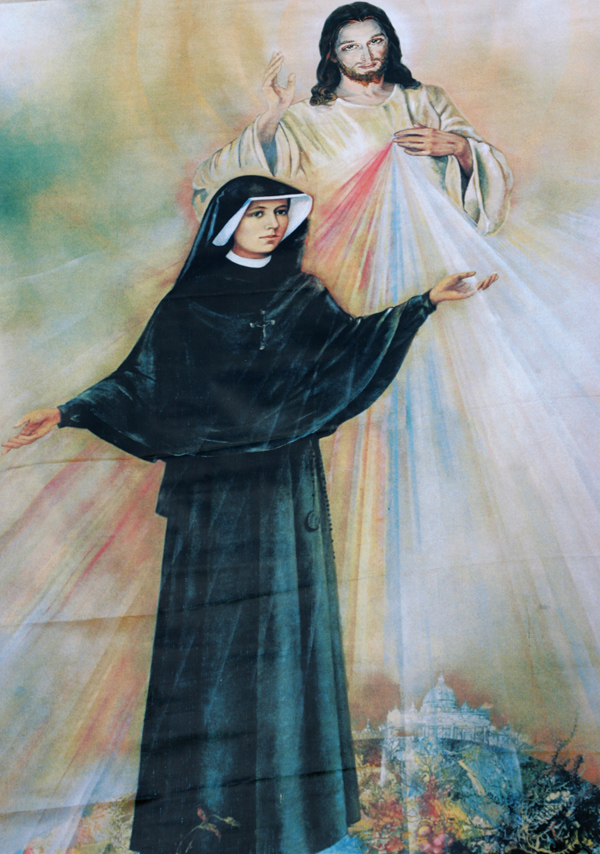 Polish Sister St. Faustina Kowalska is depicted with an image of Jesus Christ the Divine Mercy. Sauk Centre, Minn., is celebrating 31 years of being dedicated to the Divine Mercy, which came about through the efforts of four Catholic men who live in the community. (CNS photo/Nancy Wiechec)

SAUK CENTRE, Minn. (CNS) — Many people come to Sauk Centre to visit the birthplace of famed novelist Sinclair Lewis, but four local men would argue that the small community can offer something much more — the gift of the Divine Mercy.

Thirty-one years ago, a retired insurance agent, a restaurant night cook, a motel owner and a woodcarver-repairman saw to it their hometown would become the first U.S. community dedicated to the devotion.

“We got something even greater than Sinclair Lewis,” said Paul Theisen, former motel owner.

Years before Blessed John Paul II instituted Divine Mercy Sunday, observed the Sunday after Easter, Theisen, Vern Botz, Roman Kulzer and Lawrence Kaas worked to establish a Divine Mercy shrine at St. Paul’s Catholic Church in Sauk Centre and have been guardians of it ever since.

The shrine was dedicated in 1982, but its beginnings date to November 1979, when three of the men — Theisen, Botz and Kulzer — were inspired by an article about Jesus Christ as the Divine Mercy that they read in a publication called Divine Love. They were captivated by the message: “Ask for God’s mercy.” “Be merciful. “Completely trust in Jesus. … The more we trust in Jesus, the more we will receive.”

The three made a verbal commitment to promote the devotion in their community. Kaas would join them later.

“I had been looking for a job at the time and once I made this commitment, a job came within two weeks,” said Botz. “God was already protecting me and my family.”

St. Faustina Kowalska, a Polish nun, began the Divine Mercy devotion in the late 1930s based on a vision she had of Jesus in which he said he would show mercy to those who pray for it and who share that mercy with others.

As archbishop of Krakow, the pope took a personal interest in St. Faustina, helping to retract a Vatican ban on her diary by demonstrating the prohibition had been based on misleading translations of the nun’s revelatory writings. The ban was lifted in 1978, six months before his election as pope.

There is a National Shrine of the Divine Mercy in Stockbridge, Mass. It is a ministry of the St. Stanislaus Kostka province of the Congregation of Marians of the Immaculate Conception.

In Salk Centre in February 1981, Theisen, Botz and Kulzer presented to their bishop — Bishop George H. Speltz of St. Cloud — their idea of carving a Divine Mercy statue. (The late bishop headed the diocese from 1968 to 1987.)

The men decided the home of a traveling shrine would be St. Paul’s, which had had its own special connection to Divine Mercy. The current church’s cornerstone was laid the Sunday after Easter in 1906, only one year after St. Faustina was born.

With the blessing of the bishop and the approval of Father Elmer Torberg, then St. Paul’s pastor, the men searched for a carver for a statue of “Merciful Jesus” to dedicate the Sauk Centre community to the Divine Mercy devotion.

The carver was Kaas. He knew nothing of the message or the devotion. Kulzer showed him a picture taken from the Divine Love publication. With that image as his guide, Kaas spent about 120 hours carving a nearly 46-inch-tall statue, using mainly handmade tools.

He used butternut wood as the base, white oak from northern Wisconsin for the cross and bamboo for the red and white rays.

While Kaas was carving the statue, the other three men worked to distribute Divine Mercy novena booklets in Minnesota. They sent information about the devotion to congressional representatives Congress and national leaders, including President Ronald Reagan.

Botz and Kulzer sent a letter to Blessed John Paul informing him of their project and inviting him to attend the dedication.

Theisen and Kaas visited the Marian Helpers in Stockbridge to resolve questions the priests there had about the Sauk Centre mission.

The Divine Mercy shrine at St. Paul’s Church was dedicated April 18, 1982. Bishop Speltz was the main celebrant. The concelebrants were Father Torberg and Father Richard Drabik, who at the time was provincial of the Marian Helpers of Stockbridge.

In the congregation was Maureen Digan, who was from Massachusetts. Her recovery from a serious illness in 1981 could not be explained by doctors and was deemed a miracle by the Vatican and attributed to the intercession of Sister Faustina Kowalska. It was the miracle needed for her beatification.

According to Theisen, since the dedication the presence of the Divine Mercy statue has brought many conversions, healings of family relationships and what he called miracles.

He and Kaas took the traveling shrine to various communities, giving witness and spreading the Divine Mercy devotion. They never went where they were not welcomed. In recent years they have not been as busy taking it from place to place, but the four men continue to be guardians of the shrine.

“This has been such an extraordinary experience for us,” said Theisen. “To deny Christ now would be impossible.”

NEXT: Religious join bishops in urging states to opt for Medicaid expansion