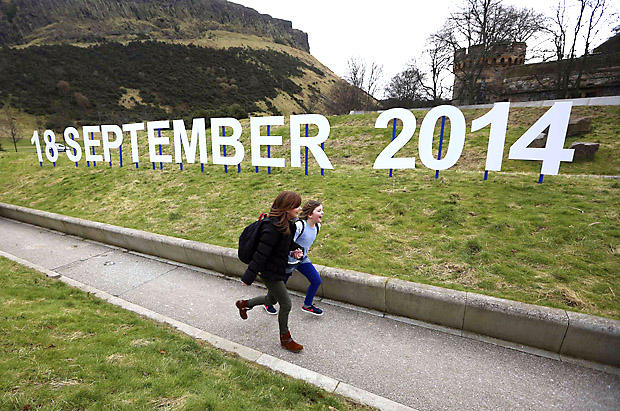 GLENELG, Scotland (CNS) — At the center of this isolated seaside community, overlooked by shadowy mountains on the nearby Isle of Skye, local fishing folk tap their feet as traditional music echoes from the village inn.

The BBC broadcasts in Gaelic here, and most youngsters have never been to Edinburgh, the Scottish capital 125 miles southeast, let alone to England.

In the fall of 2014, Glenelg’s residents will have a chance to express their identity when Scotland votes in a referendum on independence. If Scots opt for full independence, it will end a union going back four centuries.

“Although the church won’t be telling people how to vote, some bishops have indicated unofficially they’d have no problem with independence,” Father Scott Deeley, assistant chancellor of the Archdiocese of St. Andrews and Edinburgh, told Catholic News Service.

“Even after the 1707 Act of Union, which united Scotland and England, the Scots kept their own legal system as well as their own separate churches,” he said. “So independence wouldn’t make much practical difference to the lives of most Catholics.”

Since 1999, thanks to the devolution of powers, a national government and parliament have held sway in Edinburgh under a first minister appointed by Queen Elizabeth II.

That arrangement set the stage for the referendum. The Scottish and British governments agreed to the vote in early 2012 despite vigorous opposition to independence from Britain’s main Conservative, Labor and Liberal Democrat parties, which have maintained that it will be impossible to decouple societies and economies so closely bound together.

Ian Dunn, deputy editor of the Scottish Catholic Observer in Glasgow, said he thinks church members are too varied in their views for there to be a definitive Catholic vote.

Still, he said, the pro-independence Scottish National Party’s pursuit of a divisive liberal agenda, however attractive in the Presbyterian-dominated Lowlands, will cause problems in the more traditionalist Highlands, where Catholicism has its strongest roots.

“Catholics know Scotland, far from being oppressed, has been a willing partner with England for most of its recent history,” Dunn told CNS.

“The church’s leaders will urge a clear moral focus as a precondition for independence. If Catholics fail to find this in the independence camp, they may well feel safer remaining in Britain with its long traditions of religious tolerance,” he said.

Britain’s Conservative, Labor and Liberal Democrat parties are relatively weak north of the border, where the Scottish National Party was elected to government in a landslide five years ago under First Minister Alex Salmond.

Catholics, about 16 percent of the population, voted strongly for the party in 2007 and 2011 elections. Since then, church ties with the party have plummeted over its plans to legislate for same-sex marriage.

In September, Archbishop Philip Tartaglia of Glasgow warned Salmond that he risked losing “the confidence of the Catholic community.”

“I sense there’s a growing apprehension and disappointment at the direction your government is taking,” he told Salmond in a letter.

“Like others, I had begun to entertain the hope that yours would be a government of national unity which had the sagacity to move forward toward an independent Scotland by respecting and developing the historic foundational values of faith and reason which have contributed to making Scotland a nation,” the letter said.

Even if Scots choose independence, challenging negotiations lie ahead.

Although Scotland will receive income from North Sea oil and gas reserves, it will have to fund a weighty social security budget. While independence might rid Scotland of nuclear weapons, it will have to renegotiate ties with NATO and the European Union.

Faced with such complexities, opinion polls have put support for independence at just a third of Scotland’s 5.2 million inhabitants. Instead, many Scots favor the alternative of maximum devolution, or “devo max,” which would give Scotland full economic independence from the United Kingdom but keep it as part of the UK and be governed in areas such as foreign policy and defense.

To turn opinion around, the Scottish National Party has sought to rally social and cultural forces including Scotland’s churches. That’s no easy task.

Although both supporters and opponents of independence have been careful not to reopen old wounds, church reactions have been mixed.

The predominant Scottish Episcopal Church, to which 42 percent of Scots belong, has broadly come out in favor of independence in order to ensure social justice and integration.

However, the smaller Free Presbyterian Church of Scotland warned in June that separate statehood could spur secularization and endanger historic safeguards for Protestantism.

Salmond and other politicians have pledged to defend Catholic schools and expressed sympathy after the retirement of Cardinal Keith O’Brien, archbishop of St. Andrews and Edinburgh, who stepped down in February amid allegations of sexual misconduct.

With opinions polarized and feelings running high, there’ll be much to play for in the referendum campaign.

The vote follows the church-declared Year of Faith, which culminates in June with a national pilgrimage to Iona, the remote western island where the Irish St. Columba brought Christianity to Scotland 1,450 years ago.

“Independence still seems a long shot, but public opinion could swing in behind it quickly once the campaign heats up,” said John Deighan, parliamentary officer of the Scottish bishops’ conference.

“Although the church won’t be taking a position for or against, it’ll certainly respect people’s democratic wishes and try to ensure they think carefully about the foundational values of our Scottish society and Catholicism’s contribution to them,” he said.

Back at the fishing community of Glenelg, residents have yet to begin debating independence. Msgr. James McNeil, vicar general of the Argyll and the Isles Diocese, admitted he “hasn’t a clue” what the outcome will be.

But few doubt communities like this, with their deep Christian roots, will have an important part to play in deciding Scotland’s future.

NEXT: Ban on religion forced Albanians to pray in secret: one woman’s story