Ban on religion forced Albanians to pray in secret: one woman’s story 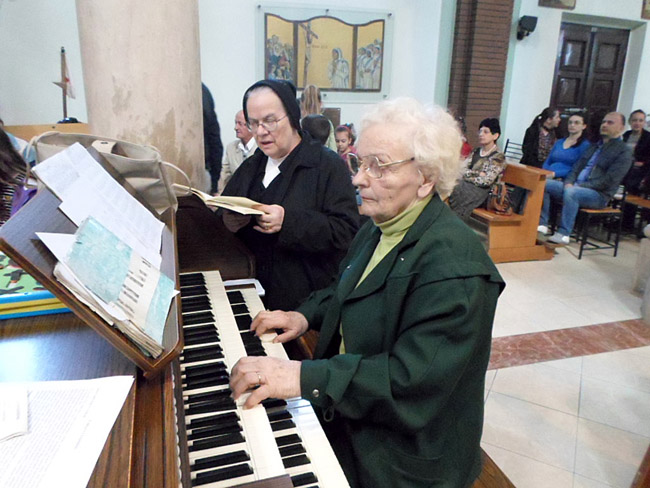 TIRANA, Albania (CNS) — Almost every evening at 6, the sounds of the organ resonate in the brick Catholic church on Kavaja Street. The hymns may vary, but the organist, Maria Dhimitri, is always the same.

It has been that way for nearly 23 years and could have been double that, Dhimitri said in a recent interview, if it had not been for a brutally enforced ban on religion in her country in southeastern Europe from 1967 to 1990.

“They banned all religious practice,” the 76-year-old musician told Catholic News Service from an annex of Sacred Heart Catholic Church.

Her smile belied the “long” and “painful suffering” that she agreed to talk about one recent Saturday in April.

“They said God didn’t exist. I couldn’t come to church or pray or speak of God at all,” she said of the communist regime that came to power in her country soon after World War II. The regime made worshipping increasingly difficult and finally imposed a ban on religion in the country in 1967, making Albania the first and only constitutionally atheist state.

After the fall of communism in Albania in the early ’90s, the still-standing churches and mosques around the country started to reopen. Maria Dhimitri organized a small choir of neighborhood children and taught them how to sing by listening to her. “My voice was the organ,” she said.

Dhimitri was teaching piano at one of the country’s top conservatories for music in the capital, Tirana, and was married with two small children when the ban went into effect.

“All the priests were arrested and killed, or put in jail,” she said of its rapid and violent enforcement by government officials, who immediately closed every church and mosque in the country.

Having been raised by a “staunchly Catholic family” from the traditionally Catholic stronghold of Shkoder, Dhimitri said “to stop praying … never crossed my mind.”

She said she knew that to show any sign of faith in public would endanger not just her, but the lives of her entire family, so she resorted to praying in the secrecy of the family’s Tirana apartment, with utmost care and sometimes “under the covers.”

“As they say, walls have ears, and there were (state) spies everywhere,” said Dhimitri, who said her children understood instinctively not to speak of their Catholic faith.

“We prayed at home, in private, out of sight of the neighbors,” said Dhimitri, adding that “many other Catholics and Orthodox prayed secretly as well … and many Muslims, too.”

“On Christmas or Easter we might cook a chicken, or have a small cake,” she said of the “hidden celebrations” during the years of the ban.

She said her husband, now deceased, had been raised Orthodox Christian but had joined the Communist Party after World War II. He did not pray, said Dhimitri, but never tried to prevent her or her children from doing so at home.

“He became disillusioned with the party and hated it, after he saw how it operated. But he remained a member,” she said, surmising that this official affiliation allowed her to keep her job teaching, despite her reputation of having been from a religious family.

“When you were from Shkoder, with a name like Maria, everyone knew you were Catholic,” she said.

Under the ban on religion, Sacred Heart was converted into “first a cinema, and then a theater and then a club,” none of which Dhimitri ever thought of frequenting “because I knew it had been a sacred place,” she said.

After the fall of communism in Albania in the early ’90s, the still-standing churches and mosques around the country started to reopen.

Sacred Heart was completely dilapidated, with no glass in the windows and no furniture left inside.

“When it rained, the water poured right in. There was only a table left, in the middle of the church,” Dhimitri recalled.

She organized a small choir of neighborhood children and taught them how to sing by listening to her.

“My voice was the organ,” she said.

Italian priests finally donated an organ, which Dhimitri has played for at Masses ever since, “every day … unless I am sick or something,” she said, adding “I feel I do something beautiful for the church.”

She said that one of the first to come to Mass and hear her play after Sacred Heart reopened was Blessed Teresa of Kolkata, possibly the world’s most famous Albanian.

“She was cordial and saint-like and blessed me and my children,” Dhimitri recalled.

Despite many hardships, Dhimitri insisted God has given her miracles: her daughter, son and grandson. “And the fact that I am in good health and can continue to come here and play,” she added.

Asked if she resented people of the former regime — some of whom are still in power — for the ban on religion and consequent jailing and death of so many faithful, Dhimitri paused, then stood up. She pointed to a painting of a Catholic priest she said passed away a few years ago and said he had spent many years in Albanian prisons because of the ban.

Before dying, the priest “met by chance the man who had informed on him … and forgave him,” she said.

NEXT: Corruption is worse than sin because heart hardens to God, pope says