At Easter pope calls Christians to be channels of mercy, justice, peace 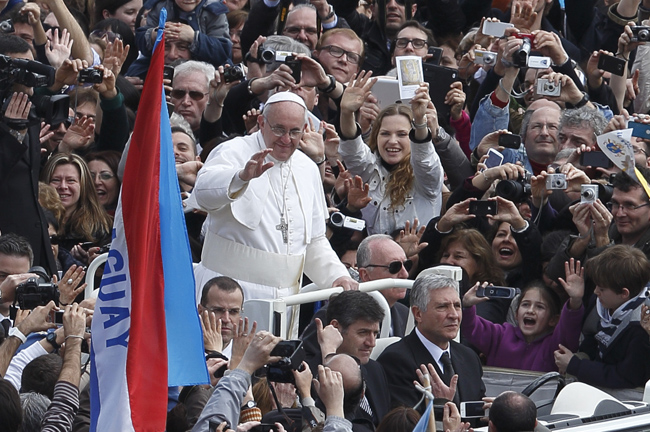 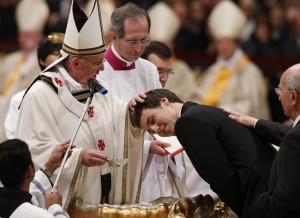 VATICAN CITY (CNS) — With Jesus’ resurrection “love has triumphed, mercy has been victorious,” Pope Francis said in his first Easter message “urbi et orbi” (to the city and the world).

“Let us become agents of this mercy, channels through which God can water the earth, protect all creation and make justice and peace flourish,” the pope said after celebrating Easter morning Mass March 31.

Pope Francis offered special prayers for peace in Syria and the rest of the Middle East, for an end to violence in Africa — especially in Mali, Nigeria, Congo and the Central African Republic — and in Asia, particularly on the Korean peninsula.

He prayed for “peace in the whole world, still divided by greed looking for easy gain, wounded by selfishness which threatens human life and the family, selfishness that continues in human trafficking, the most extensive form of slavery in this 21st century.”

Pope Francis said he would like to bring the good news of Christ’s resurrection to each person on earth, “to every house and every family, especially where suffering is greatest: in hospitals, in prisons.”

Easter dawned with blue skies and sunshine in Rome, but as the crowds gathered in St. Peter’s Square, dark clouds began gathering overhead. Still, some 250,000 people gathered for the Mass, and thousands more arrived for the pope’s “urbi et orbi” blessing.

The steps leading to St. Peter’s Basilica and to the altar were decorated with thousands of flowers, trees and bushes. The Dutch flower growers’ association provided 20,000 tulips, 10,000 daffodils and 3,000 white roses in addition to small birch, maple and mulberry trees.

Like his predecessors, Pope Francis did not give a homily during the morning Mass, but spoke during his “urbi et orbi” address about the significance of the Resurrection for individuals and for the world.

But unlike his predecessors, Pope Francis did not read quick Easter greetings in dozens of languages, although the brief phrases had been prepared for him.

Rather, in his message, he told people, “Jesus is risen, there is hope for you; you are no longer in the power of sin, evil.”

Easter, the pope said, “is the exodus, the passage of human beings from slavery to sin and evil to the freedom of love and goodness.”

However, he said, that passage must be renewed in every age and in every human heart.

“How many deserts, even today, do humans beings need to cross — above all, the desert within, when we have no love for God or neighbor, when we fail to realize that we are guardians of all that the Creator has given us and continues to give us,” Pope Francis said.

“God’s mercy can make even the driest land become a garden, can restore life to dry bones,” he said.

Pope Francis urged people to join him in praying to be transformed by the power of God’s love and mercy and to help “change hatred into love, vengeance into forgiveness, war into peace.”

The morning Mass began less than 12 hours after Pope Francis had finished presiding over the nighttime Easter Vigil, lighting the Easter candle and processing into a St. Peter’s Basilica lit mainly by the flashes of the cameras that people had been asked not to use.

During the Mass, he welcomed into the Catholic Church four men between the ages of 17 and 30. The men from Albania, Italy, Russia and the United States were baptized, confirmed and received their first Communion at the Mass. The 17-year-old from the United States was identified as Anthony Dinh Tran.

In his homily for the vigil, Pope Francis spoke about how the women had gone to Jesus’ tomb with sorrow and love to anoint his body.

But, he said, “something completely new and unexpected happens.”

They find the tomb empty, and they are confused and afraid, the pope said.

Like the women at the tomb, he said, often “we are afraid of God’s surprises,” yet, “he always surprises us.”

“Dear brothers and sisters,” he said, “let us not be closed to the newness that God wants to bring into our lives. Are we often weary, disheartened and sad? Do we feel weighed down by our sins? Do we think that we won’t be able to cope? Let us not close our hearts, let us not lose confidence, let us never give up.”

The risen Jesus is risen for all time, he said, meaning that his is forever victorious “over everything that crushes life and makes it seem less human.”

Pope Francis said he knows there are many times in life when it is difficult to believe in the power of God to bring forth new life. It’s easier, he said, to be like the women in the Gospel and “look for the living among the dead.”

The women in the Gospel are told to remember their life with Jesus and the things he had said and done. Only then do they conquer their fear and share the news of the Resurrection with the other disciples.

NEXT: Pope urges Catholics to let grace transform, work through them