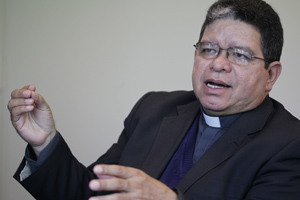 WASHINGTON (CNS) — A Venezuelan bishop said he hoped efforts to improve relations between the country’s Catholic Church and the socialist government will continue under newly elected President Nicolas Maduro.

High-level meetings between the Venezuelan bishops’ conference and the government, including Maduro, began last May in an effort “to foster a climate of peace” and to “reflect the dignity and independence of each institution,” Bishop Jose Azuaje Ayala of El Vigia-San Carlos del Zulia, Venezuela, told Catholic News Service April 22 during a visit to the U.S. Conference of Catholic Bishops.

Bishop Azuaje said the meetings began under former President Hugo Chavez, who died March 5 of complications from cancer. Maduro, who was vice president when Chavez died, was among the government officials involved in the meetings. Maduro was Chavez’s hand-picked successor.

Maduro won a narrow victory — 50.8 percent to 49 percent — over Henrique Capriles in national elections April 14. The following day, a week of noisy and at times violent protests erupted, asking that the results be reviewed.

The violence led to eight deaths and more than 100 injuries, reported the state-run AVN news agency.

Venezuela’s National Election Commission announced hours before Maduro’s inauguration April 19 that an audit of all ballot boxes would be undertaken and that the review would last about 30 days.

Bishop Azuaje, first vice president of the bishops’ conference, said the bishops supported the audit in a statement released April 17 after some of the protests turned violent.

The statement also called for peace to be maintained and violence to be avoided in any protest against the election outcome.

“Violence only leads to tragedy and to a dead end,” Bishop Azuaje told CNS. “It’s important to strengthen democratic processes for the good of the country.”

Capriles also called for an end to the violence. Supporters have since turned to banging pots in nightly demonstrations in cities and towns throughout the country.

The bishops offered to mediate discussions between the Maduro government and Capriles, the candidate supported by a coalition of opposition parties.

“This whole process is reflective of the ultimate objective of the church of trying to establish dialogue within Venezuelan society in a peaceful manner … so that there will be mutual respect between the parties and a resolution of those internal issues based upon truth and the ultimate good and development of the Venezuelan people,” Bishop Azuaje said.

Throughout much of Chavez’s 13 years as president, relations between the church and the government remained complicated if not downright rocky, church officials have said. Chavez later adopted a more conciliatory tone and the church accepted the olive branch.

Azuaje arrived in the U.S. April 21 for four days of meetings at the USCCB and Catholic Relief Services.