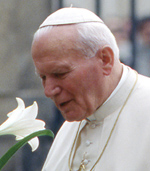 VATICAN CITY (CNS) — A Vatican-convoked commission of doctors concluded a healing attributed to Blessed John Paul II had no natural explanation, according to Italian news reports.

Eventual papal approval of the alleged miracle would clear the way for the canonization of the pope, who died April 2, 2005, and was beatified May 1, 2011.

Once a panel of physicians convoked by the Congregation for Saints’ Causes determines a healing is authentic and lasting, and that there is no natural, medical explanation for it, the files are passed on to a panel of theologians.

The theologians study the events — especially the prayers — surrounding the alleged miracle and give their opinion on whether the healing can be attributed to the intercession of a particular sainthood candidate.

If the theologians give a positive opinion, the cardinals who are members of the congregation vote on whether to recommend the pope recognize the healing as a miracle and set a canonization date.

The newspaper Il Messaggero quoted Jesuit Father Federico Lombardi, the Vatican spokesman, as saying, “There is a widespread desire for the canonization” of Blessed John Paul, “but no date has been set. First these two formal acts (by the theologians and by the cardinals) are necessary, and then the decree of the pope about the miracle.”

In sainthood causes, the votes by the board of physicians usually are kept confidential. News about progress in causes generally is known only once a pope approves decrees related to them.

Msgr. Slawomir Oder, the postulator of Blessed John Paul’s cause, was not giving interviews in late April.

Several Italian newspapers quoted an unidentified source as saying the alleged miracle presented to the Vatican involved a woman who was healed just a few hours after the late pope was beatified by Pope Benedict XVI.

When the details are made public “many people will be surprised,” the source said.

“It would be marvelous if it took place during the Year of Faith,” which ends in November, the cardinal was quoted as saying.

He said he hoped the ceremony could be held in October, “35 years after his election” to the papacy in 1978.