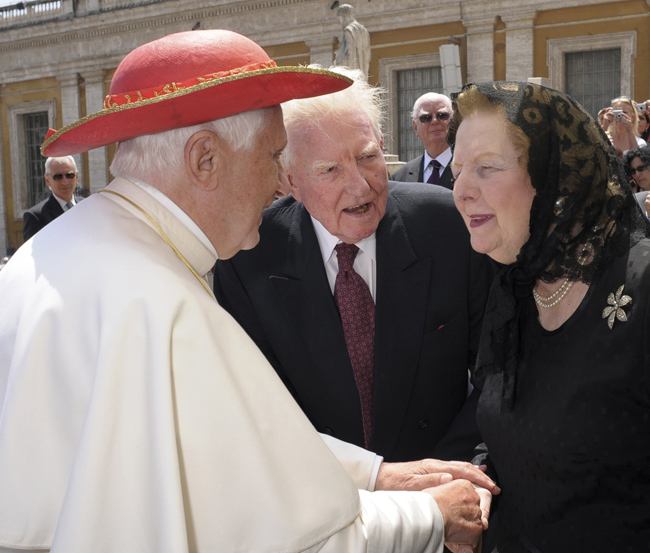 Pope Benedict XVI greets former British Prime Minister Margaret Thatcher during his weekly audience in 2009 in St. Peter's Square at the Vatican. Thatcher, a major figure in British and world politics and the only woman to become British prime minister, died April 8 at the age of 87. (CNS photo/L'Osservatore Romano via Reuters)

LIVERPOOL, England (CNS) — The Catholic bishops of England and Wales offered prayers for the soul of Margaret Thatcher, the former British prime minister who died at age 87 following a stroke.

Baroness Thatcher, who led Britain from 1979 to 1990, died “peacefully” the morning of April 8, according to her family.

Soon after news of her death was made public, Archbishop Vincent Nichols of Westminster, president of the Bishops’ Conference of England and Wales, issued a short statement.

“It was with sadness that we heard the news of the death of Baroness Thatcher, who served this country for many years both as a member of Parliament and as prime minster,” said Archbishop Nichols.

“We pray for the repose of her soul and for the intentions of her family and all those who now mourn for her,” he added.

Baroness Thatcher, the daughter of a Methodist greengrocer, became the first woman ever to hold the office of British prime minister when her center-right Conservative Party swept to power at the end of a decade troubled by economic misery and public strikes.

On May 4, 1979, the day of her election, she read out the prayer of St. Francis of Assisi in her first address to the nation.

While in office, Thatcher strove to “roll back the frontiers of the state” by privatizing state-owned sectors of British industry and by giving people in social housing the right buy their homes from local authorities.

She reduced the powers of the trades unions, lowered taxes and introduced monetary policies to lower inflation.

But deindustrialization of the 1980s also saw rising unemployment and rioting in major British cities, leading to appeals from Catholic and Anglican bishops for Thatcher to take a more “compassionate” approach.

She also took Britain into war with Argentina over the Falkland Islands in 1982 and united with U.S. President Ronald Reagan and Blessed Pope John Paul II in taking a strong position against communist imperialism, for which she earned the moniker the Iron Lady, given to her by a Soviet journalist.

She also took an uncompromising approach to Irish terrorism, and U.K. National Archives opened in 2010 show that she wrote to Blessed John Paul in 1980 to ask the pope to condemn an IRA hunger strike at the Maze Prison in Belfast, Northern Ireland.

In 1984, Thatcher survived an IRA attempt to assassinate her with a bomb in a hotel in Brighton, England.

Thatcher was seldom openly antagonistic toward the Catholic Church, however, and Lord Alton of Liverpool, a Catholic member of Parliament, recalled in an April 8 statement how he had once arranged a meeting between the prime minister and Blessed Teresa of Kolkata.

Lord Alton said Mother Teresa told him later that she had challenged the prime minister about the number of people living on the streets and the number of abortions in the United Kingdom.

“In response, Margaret Thatcher gave her a short speech on Britain’s welfare provisions and social security,” he said. “Mother Teresa simply responded by asking ‘But do you have love?'”

Baroness Thatcher, a pharmacist, then a lawyer before entering politics, was opposed to introducing restrictions to the 1967 Abortion Act, but she also opposed the destructive experimentation on human embryos on the grounds that there was no scientific justification for it.

In an April 8 statement, British Prime Minister David Cameron, also a Conservative, described his predecessor as a “great leader” and a “great Briton.”

He canceled a meeting in Madrid with French President Francois Hollande so that he could return to Britain.

A Buckingham Palace spokesman said Queen Elizabeth II was “sad to hear the news of the death of Baroness Thatcher” and would be sending a private message of sympathy to her family.

Baroness Thatcher will not have a state funeral, in accordance with her own wishes, but she will be buried with full military honors after a ceremony in St. Paul’s Cathedral, London.

NEXT: Canada’s bishops issue ‘call to action’ on environment