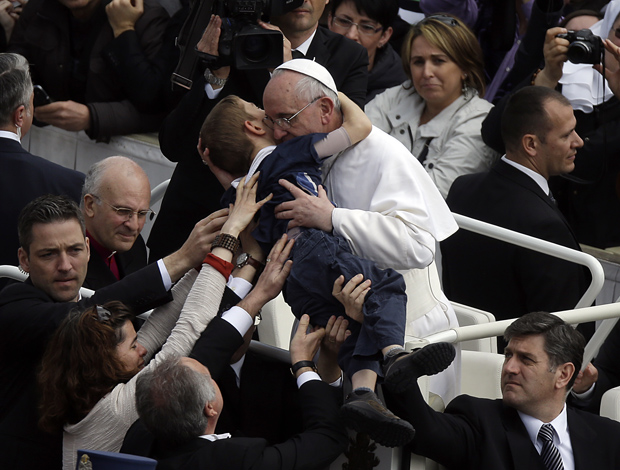 This photo by AP photographer Gregorio Borgia of Pope Francis embracing 8-year-old Dominic Gondreau, who has cerebral palsy, captured the attention of people around the world. The moment took place after the new pontiff celebrated his first Easter Mass in St. Peter's Square at the Vatican March 31. (Gregorio Borgia, AP via CNS)

PROVIDENCE, R.I. (CNS) — By Easter Monday, it would be the shot seen around the world.

But a day earlier, Christiana Gondreau could not have imagined that a chance encounter she and her 8-year-old son, Dominic, had with Pope Francis in the middle of St. Peter’s Square following his first Easter Mass would touch the hearts of so many around the globe.

While making his way in the popemobile through a sea of faithful estimated at 250,000, the newly elected pontiff smiled and waved as he offered Easter greetings to those gathered.

At one point in his second journey around the square, on the way to delivering his Easter message “urbi et orbi” (to the city and the world), the white Mercedes transporting the pope stopped. He reached over to greet Dominic after a compassionate Vatican usher named Augustino had repositioned mother and son at a corner of the path so the pontiff could better see them.

Pope Francis lifted Dominic, who has cerebral palsy, while embracing and kissing him. He also spoke to the boy before gently placing the child back into his mother’s arms.

“The pope definitely was whispering to him, but there’s no way of knowing what he said. Is it a secret?” Gondreau said in a telephone interview from Rome with the Rhode Island Catholic, newspaper of the Providence Diocese.

She is certain, however, that the meeting was divinely inspired, and serves as a message that God shows favor to all his little ones.

“I do believe that it was a kiss from heaven, to say this child is loved and I know him,” Gondreau said.

As the pope moved on through the crowd, camera shutters continued to click on Dominic as those in attendance quickly realized they were witnessing a very moving moment.

“Your son is here to show others how to love,” Gondreau said one woman shouted out to her from the crowd after the pope departed.

Others asked her for her email, promising to send photos they had captured of the pope and her son. She would be asked for interviews by news organizations from around the world.

“There was a part of me that didn’t want to leave that spot,” she said, savoring the special moment.

After the papal address she then made her way back across St. Peter’s Square from the special seating area offered to one parent or family member accompanying someone with a disability to the Mass.

It was there that she met up with her husband, Paul Gondreau, a theology professor at Providence College who is teaching a class in Rome this semester, and their four other children, including 5-year-old twin daughters Maria and Junia.

Paul Gondreau had become mesmerized by the encounter between his son and the pope that he had just witnessed on one of the large television screens broadcasting a live feed of the event from Vatican TV.

His elder son Lucas, 12, was the first to notice the loving attention his brother was receiving from the pope, and quickly pointed it out to his father.

“I was just speechless. Lucas and I started crying,” Paul Gondreau said. “It seems the pope was captivated by Dominic.”

He likened the tender moment between pope and child to an encounter of a modern Francis with a modern Dominic, referring to an historic encounter tradition holds once occurred between St. Francis and St. Dominic.

For Lucas, an altar server back home who since arriving in Rome has already experienced the honor of serving Mass at the subterranean tomb of St. Peter beneath the Vatican basilica, witnessing the pope stop to greet his younger brother was something he’ll never forget.

“It was so touching to see my brother being picked up and held by the pope,” he said. “You could see on (Dominic‘s) face how happy he was.”

The professor, along with his family of seven, is living in Rome this semester as he teaches a course on the New Testament and the Eternal City.

Together, they’ve been there for momentous events in the life of the church, from the resignation of Pope Benedict XVI to the election and installation of Pope Francis.

But the kindness shown to Dominic by Pope Francis will be the most enduring part of their experience together.

Paul Gondreau believes no one shares in God’s cross more intimately than the disabled, and that he extends his hand over the weak and the vulnerable so that they may serve as models of inspiration.

“No one plans to have a special needs child,” he said. “They are a tremendous blessing.”

He describes Dominic as “cognitively normal,” meaning he understands what is going on around him and can speak some words and some simple sentences, but that his limitations are purely physical.

“God has touched our family all our lives, now, he has touched the whole world with Dominic,” he added.

The Gondreaus’ eldest child, daughter Alena Maria, 16, has been using technology to keep family and friends back home up to date on the all the exciting events unfolding around them in Vatican City.

“I didn’t think that in being here all this would happen,” Alena Maria said.

Snizek is editor of the Rhode Island Catholic, newspaper of the Diocese of Providence.

NEXT: Bishops offer prayers after death of Britain’s Margaret Thatcher