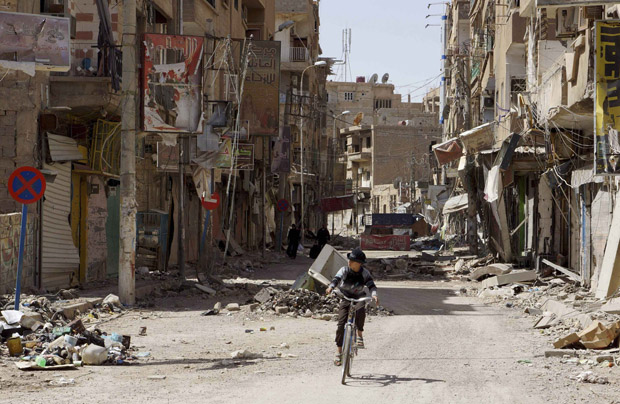 VATICAN CITY (CNS) — Unless western nations immediately find ways to bring peace to Syria instead of debating whether to arm opposition forces, the country will continue to be in turmoil and a victim of the West’s indecision, said a Syrian patriarch.

“It’s truly a pity, a great pity to not think in terms other than ‘to arm’ or ‘not to arm,'” said Syrian-born Melkite Patriarch Gregoire III Laham of Damascus.

“No one is talking about more serious, more realistic, and more effective efforts for peace,” he told Vatican Radio April 18.

The patriarch had a private audience with Pope Francis earlier in the day, and he said he told the pope about the suffering in Syria.

According to the United Nations, more than 70,000 people — mostly civilians — have been killed and more than 3 million Syrians have been displaced inside the country since the uprising against President Bashar Assad began two years ago. In addition, some 1.1 million people have taken refuge in Lebanon, Jordan and Turkey.

“We are dying, every day we are victims of chaos, we run the risk of being kidnapped, ending up victims of some explosion as simple bystanders, an explosion of a school, factory, university or church,” he said.

“There is a gross injustice in the consideration, evaluation of the situation” of Syria by western nations who seem to limit their options to whether they should arm the opposition against Assad’s regime when the real problem is “how to bring peace,” he said.

“We are the victims of your indecision,” he said, referring to the governments of the United States, France, England and other European nations.

Patriarch Laham said Syrians are hoping something good will come out of talks scheduled in June between U.S. President Barack Obama and Russian President Vladimir Putin.

“We hope the two countries can agree on how to end the crisis and not on whether to arm or not arm” the opposition because a prolonged, narrow debate will mean “there will only be still more victims, calamity, suffering and fighting in the whole Middle East,” he said.

PREVIOUS: Battle with the devil: Pope Francis frames the fight in Jesuit terms