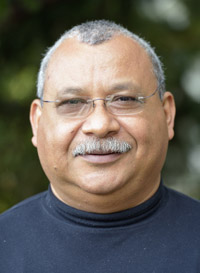 SEATTLE (CNS) — A priest from Honduras says the United States is repeating the same errors in Central America as it did in the 1980s, and his country is suffering as a result.

Jesuit Father Ismael Moreno, who directs Radio Progreso, a feisty activist station on the Caribbean coast of Honduras, recently told several gatherings in Oregon and Washington that U.S. intervention in his country, supposedly focused on drug trafficking, has undermined democracy and fostered corruption.

“As part of its war on drugs, the U.S. government went looking for partners, and in Honduras it found the same allies it had used in the 1980s,” Father Moreno told a gathering in a Seattle church in mid-April. “Rather than fighting communism, these days they’re fighting narcotraffickers, but these allies — the military and police, the prosecutors and judges — are all involved in organized crime. They aren’t really loyal allies of the United States.”

Father Moreno said several factors combined to make Honduras what many consider to be the most violent country in the world today.

“When peace came to El Salvador and the contras ended their war in Nicaragua in the 1990s, a good part of the assault weapons they used immigrated to Honduras, and many are used by private security companies headed by former military chiefs. At the same time, drug traffickers in Colombia started routing their shipments through Central America. Add to that the return of youth gangs from the United States, as well as the neoliberal economic changes imposed on the region. All that increased the concentration of land and worsened already chronic poverty, so it’s no wonder you today have an explosion of violence,” he said.

Many observers say Honduras verges on being a failed state, and since a military coup against reformist President Manuel Zelaya in 2009, the situation has worsened. Dozens of human rights activists and peasant organizers have been assassinated.

“The government exists, but the police, military chiefs, prosecutors, judges and members of Congress are more interested in benefitting from criminal behavior, especially drugs, than they are in carrying out the functions of government,” Father Moreno told Catholic News Service.

Honduras has become particularly dangerous for journalists. In an April 9 statement, the Paris-based Reporters Without Borders said it was “very concerned about an increase in harassment and violence against media personnel” in Honduras. It said Honduran authorities “must be constantly reminded of their duty to protect journalists and human rights defenders in a country where they are under great threat.”

Radio Progreso has had correspondents jailed and murdered, and the station’s studios have been temporarily seized by the military, most recently last August.

“It doesn’t matter if the journalist is politically from the left or right. If the news they produce bothers someone with power, that person will contract two or three killers. The powerful person knows that the government will protect them. Only if people make a lot of noise about the killing will the police capture the one who pulled the trigger, but the powerful person is never held responsible,” he said.

Radio Progreso is a Catholic station, but Father Moreno, popularly known as Padre Melo, admits its programming is not normal church fare.

“We participate in the network of Catholic media in Honduras and, with a couple of exceptions, we are like foreigners there, because we don’t focus so much on doctrine as on finding Christian inspiration within the context of Honduran reality, and we do that from the perspective of an option for the poor,” he said.

“We belong to the Catholic Church, but we don’t limit our programing to confessional matters. We are redefining the faith from the perspective of the victims, those who suffer in a society with high levels of impunity. This is a service we offer to Honduran society, at the same time challenging the church to recover its prophetic mission in a society which is broken.”

Father Moreno also directs the Center for Reflection and Scientific Investigation, a Jesuit think tank that, along with Radio Progreso, often gets blamed for stirring up trouble.

“When a group of peasants takes over a piece of land, what they term a recuperation, the business leaders, politicians and police immediately think that there has to be another force pushing the peasants to take action. There always has to be a sinister hand behind it. In the last century it was the communists who they blamed. Today it’s a sector of the church.”

The whole church is not seen as responsible.

“For the powerful there’s one type of church which is good. That’s the church of the hierarchy, the parish priest who preaches well, the urban lay movements. The bad things are always done by the Jesuits,” including Radio Progreso, he said.

Behind that perception, Father Moreno said, is “contempt for the capability and creativity of the poor. It is unimaginable to the powerful that the poor could think for themselves, so there have to be other brains behind them, directing their actions.”

Perhaps not surprisingly, Father Moreno has received several death threats in recent years, and so he, like several other human rights activists in Honduras, is often shadowed by “accompaniers” from other countries.

“The legal system here doesn’t work, and we don’t trust the police,” he said. “The law of the strongest is what prevails. So we have appealed for international help, and the accompaniers have given us some sense of security, and more capability to do our work. Being accompanied helps deter our possible aggressors because they know that we’re not alone, that we have international respect.”