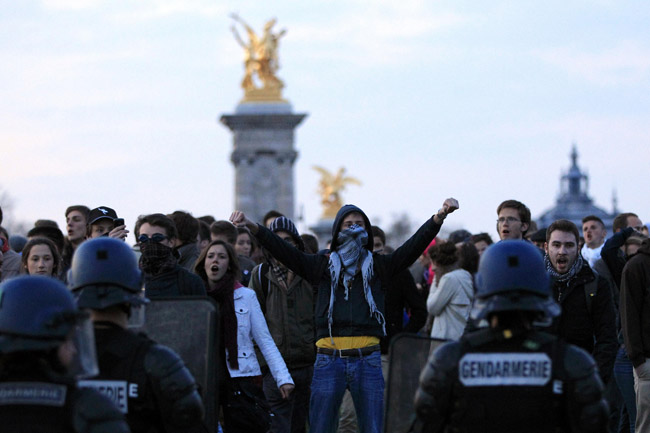 PARIS (CNS) — French Catholics have vowed to continue attempts to block a law allowing same-sex marriage, despite its passage by the National Assembly April 23.

“We’ll tell our president we don’t care about the views of parliament and government — we’re against this foolish law,” said Antoine Renard, president of France’s National Federation of Catholic Family Associations.

“MPs are well aware public opinion has been shifting against this law. So we must hope the head of state may still hold back because of the situation in the country,” he said April 24.

France’s National Assembly voted 331-225 to enact the “Marriage for All” bill, which allows gay and lesbian couples to marry and adopt children. The legislation must be signed by President Francois Hollande to become law. However, the law has been appealed to the Constitutional Court, which must hear such appeals within a month.

Renard said his federation had helped draft the Constitutional Court appeals and hoped they could still prevent Hollande from signing the legislation into law. He added that Socialist Party legislators had been denied a free vote on the bill, in violation of parliamentary rules, and said opponents were ready to take the issue to the European Court of Justice. 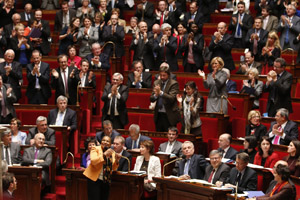 French Justice Minister Christiane Taubira is applauded as she speaks at the National Assembly in Paris April 23. French lawmakers voted that day to legalize same-sex marriage, despite vocal protests from some conservatives who opposed the bill. (CNS photo/Charles Platiau, Reuters)

“France often shows a lead to other countries, so we’re worried many Europeans will now see homosexual marriage as an inevitability,” Renard said. “We must now transfer the fight to the European institutions, making it clear to them that we don’t want these gender theories imposed on us.”

He told Catholic News Service that surveys suggested 57 percent of citizens now opposed the law, adding that he was “not surprised” by violent reactions to the vote.

Police clashed with thousands of demonstrators during the April 23 vote on the legislation, which would make France the 12th country worldwide to allow same-sex marriage. Earlier in April, New Zealand passed a same-sex marriage law that will take effect in August, and Uruguay’s legislature passed a law that the president has indicate he would sign.

The French bishops’ spokesman, Msgr. Bernard Podvin, said he was “deeply saddened” by the National Assembly vote, which he said would not “create social cohesion.”

He added that the Catholic Church, to which two-thirds of France’s 60 million inhabitants belong, would “continue to use its free speech” on the issue “always with respect for the institutions and with nonviolence.”

“When one sees how the polls fluctuate and how demonstrators express themselves, how can one claim public opinion desired this reform?” the priest said.

“To those who say this is ‘equality,’ I respond that marriage is a base and not just the extension of a right. It was entirely possible to respect the homosexual person profoundly without approving this reform.”

Meanwhile, a Catholic bishop condemned an assault on a gay couple near his residence and said the church believed “civility and respect for people” were “never negotiable in a state of law.”

“Nothing can be said to justify such acts, and we reject all physical and verbal violence irrespective of motive and victim,” Bishop Louis Sankale of Nice said April 23.

PREVIOUS: Corruption is worse than sin because heart hardens to God, pope says

NEXT: Pope confirms young people, including two from New Jersey