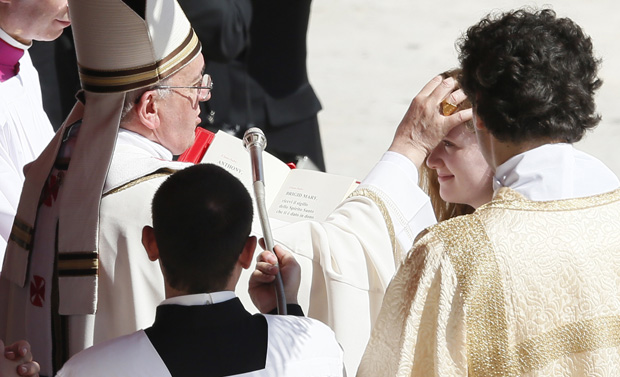 Pope Francis administers the sacrament of confirmation to Brigid Miniter, 14, of Ridgewood, N.J., during a Mass in St. Peter's Square at the Vatican April 28. (CNS photo/Paul Haring) 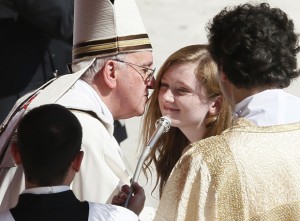 Pope Francis kisses Brigid Miniter, 14, from Ridgewood, N.J., after administering the sacrament of confirmation to her during a Mass in St. Peter’s Square at the Vatican April 28. (CNS photo/Paul Haring)

VATICAN CITY (CNS) — Administering the sacrament of confirmation to 44 people, including two teenagers from the United States and two from Ireland, Pope Francis encouraged them to “swim against the tide; it’s good for the heart.”

In a partially improvised homily at Mass April 28 in St. Peter’s Square, Pope Francis encouraged young people to hang on to their ideals and pursue them. “We Christians weren’t chosen by the Lord to do little things,” he said.

After making the sign of the cross with chrism oil on the foreheads of those being confirmed, Pope Francis rubbed the oil all over their foreheads, sealing them with the Holy Spirit. After wishing them peace, he gave each a quick kiss on the cheek.

The two U.S. teens confirmed were Brigid Miniter, 14, and Anthony Merejo, 17, from Our Lady of Mount Carmel parish in Ridgewood, N.J. The two young people from Ireland were Edmond Roche, 13, and Emily Mulcahy, 12, from the Diocese of Cloyne.

Msgr. Ronald J. Rozniak, pastor of the Ridgewood parish, said he didn’t know how his community was chosen by the archdiocese and he did not ask. “You don’t look a gift horse in the mouth,” he told Catholic News Service.

An estimated 70,000 young people who have been confirmed or will be confirmed this year also were present for the Mass in St. Peter’s Square, one of the major events scheduled months ago for the Year of Faith. The Vatican said more than 100,000 people gathered in and outside the square, and in neighboring streets for the Mass and the recitation of the “Regina Coeli” prayer afterward.

The 44 people receiving confirmation came from 22 countries and ranged in age from 11 — two Italians and a Romanian — to 55-year-old Maria Silva Libania from Cape Verde. The usual age for receiving confirmation is set by local bishops, not the Vatican. Malia Petulisa Malani, 18, traveled the greatest distance for the Mass; she is from Tonga in the South Pacific.

Malani and several other confirmation candidates wore their native dress, while most wore crisp suits and new dresses. Their peers watching from the square, however, mostly wore T-shirts and jeans on the warm, sunny spring day.

The Pontifical Council for Promoting New Evangelization, which is organizing the major Year of Faith events, asked the candidates’ 22 bishops to choose representatives. The U.S. teens are from the Archdiocese of Newark.

Archbishop Rino Fisichella, council president, said the candidates were chosen to reflect “the face of the church present where people live and suffer in order to give everyone hope and the certainty of a future.”

After the Mass, each of those confirmed received a silver-framed photograph of the pope, personally signed by Pope Francis.

In his homily, Pope Francis said the Holy Spirit brings “the new things of God. He comes to us and makes all things new; he changes us.”

(See the full text of the pope’s homily.)

If Christians allow it and are open to it, he said, the Holy Spirit starts making things new now, in this life, in preparation for “the ultimate newness which awaits us and all reality: the happy day when we will see the Lord’s face — his beautiful face — and be with him forever in his love.”

Pope Francis told the young people that the new things the Holy Spirit brings are not like the new trends and fads of modern life; the newness of the Holy Spirit lasts forever. “The Holy Spirit is truly transforming us and through us, he also wants to transform the world in which we live.”

“How beautiful it would be,” he said, if each person allowed himself or herself to be guided by the Holy Spirit. Each night he or she would be able to review the day and say, “Today at school, at home, at work, guided by God, I showed a sign of love toward one of my friends, my parents, an older person.”

Pope Francis said he wanted to be realistic: “the journey of the church and our own personal journeys as Christians are not always easy; they meet with difficulties and trials.”

But the Holy Spirit gives believers the strength and courage to overcome trials, Pope Francis said. “Let us trust in God’s work. With him we can do great things; he will give us the joy of being his disciples, his witnesses.”

“Let’s not get discouraged,” he said. “We have the strength of the Holy Spirit to conquer these tribulations.”

“Remain steadfast in the journey of faith,” the pope said. “Listen carefully, young people, swim against the tide; it’s good for the heart, but it takes courage.”

The Holy Spirit is the source of the necessary courage, he said. “There are no difficulties, none, no trials or misunderstandings to fear if we remain united to God.”

At the end of the Mass, the pope entrusted the newly confirmed to the care of Mary, saying she “teaches us what it means to live in the Holy Spirit and what it means to welcome the newness of God into our lives.”

(See the pope’s message at the end of Mass.)

Pope Francis told the young people that Mary “will help you be attentive to what the Lord is asking of you and to live and walk always according to the Holy Spirit.”

Before reciting the “Regina Coeli” prayer, Pope Francis also prayed for the more than 350 people in Bangladesh who were killed April 24 when an eight-story building housing garment factories collapsed. The search for survivors continued April 28.

After offering his condolences to the families of the victims and to the injured, Pope Francis said he wants to make “a strong appeal that the dignity and safety of workers would always be protected.” 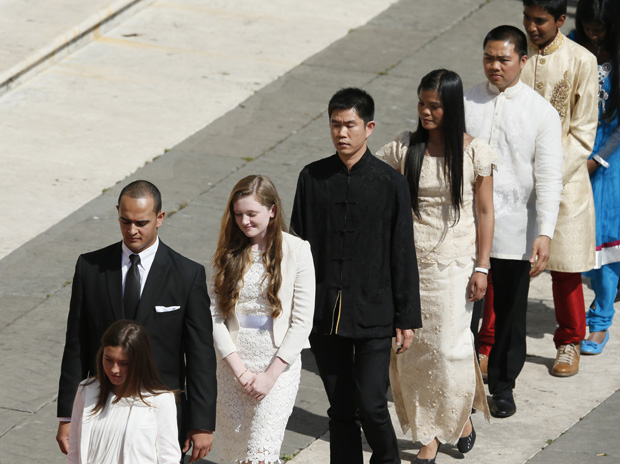 Young people walk forward to receive the sacrament of confirmation from Pope Francis during a Mass in St. Peter’s Square at the Vatican April 28. (CNS photo/Paul Haring)