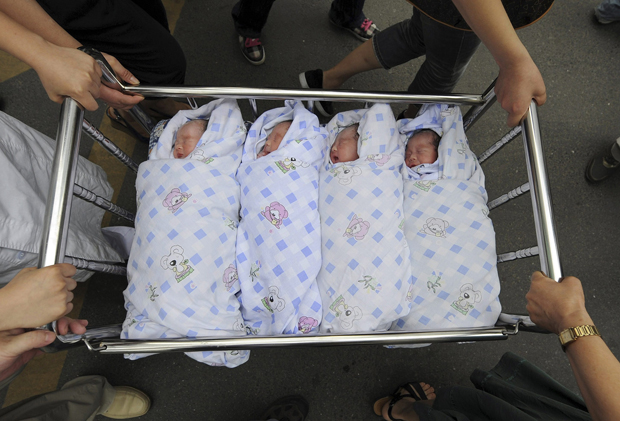 Newborn quadruplets lie in a cart in 2010 at a hospital in Hefei, China. (CNS photo/Jianan Yu, Reuters)

MANILA, Philippines (CNS) — Young Chinese adults born under the nation’s one-child policy are planning their families based on personal experience as Chinese government officials debate the future of the state’s population control strategy.

Many cite issues such as loneliness growing up and pressure as an adult to take care of elders as reasons to have more than one child. Others recall families with multiple children separated by economic pressures.

“My plan is to have a boy, and then a daughter and, after six years, I wish to have one more, maybe a girl,” said Teresa Li, who arrived in Manila early this year from Wenzhou City, China, to study.

“Even our classmates and friends, when we get together and talk about how many children we want to have, most of them want two or three,” the 21-year-old environmental engineering graduate told Catholic News Service.

Her friends speak of “how it’s very lonely” as an only child, and how some solo children have turned out to be spoiled “little princes” and “princesses” after being showered with all the parents’ attention.

“For the only child, it is great pressure to have everyone expecting him or her to take care of the parents and elders when they get old,” Li added. Her parents, who already had a son, paid a government fine after she was born.

The Chinese government imposed its one-child policy in 1979 to curb the growth of the population that, at that time, was reaching 972 million people. The policy most strictly applies to Han Chinese living in urban areas of the country, but not to ethnic minorities around China. Han families in rural areas can apply to have a second child if the first child is a girl.

“In Beijing, Shanghai and big cities, many people from my generation born in the 1980s at the start of the one-child policy — like many of my classmates — are the only child,” said a priest from Hebei province in northern China. He spoke to CNS on condition of anonymity.

“Many of these classmates don’t like to have more than one child, because they were raised that way. There is not much debate, not much protest from them” concerning restrictions on the number of children they can have, the priest said.

Li said she understands from experience why young city residents would prefer to avoid having to raise children.

She recalled: “I grew up living with a teacher since I was nine. My mother had to leave me with her so she could go to Hubei province in central China with my father to get better work. I have no memory of my father because he left to work in the northernmost province after I was born until he moved to Hubei. They left my brother with another teacher. Kindergarten is too expensive, so many parents leave their children in a home of the teacher, where about 20 students stay during the week and go home on weekends. I would go to my grandpa’s house. I would cry because I missed my mother.”

The government census report released in April 2011 recorded a mainland Chinese population of 1.34 billion people. In 2013, there were reportedly 200 million senior citizens and a labor force that had shrunk by 3.5 million in 2012, even though the one-child policy has been relaxed slightly through the years.

A 2011 report on China’s aging population by Maryknoll Father Michael Sloboda for the Hong Kong Diocese’s Holy Spirit Study Centre refers to the “4-2-1” problem in which the policy leaves four grandparents and two parents looking to one child for support.

“Since that young adult will also be concerned about finding a spouse and starting a family, the financial and emotional demands will be intense,” Father Sloboda wrote.

In October, state media reported the Chinese government think tank China Development Research Foundation had proposed replacing the one-child policy with a nationwide two-child policy by 2015. It prompted more questions on the role of demographics in economic development and reform and how to proceed with the policy restricting the number of children couples can have.

The debate continues among senior officials in China’s new government.

NEXT: Korean-American Catholics worried about relatives in South Korea in face of threats of war