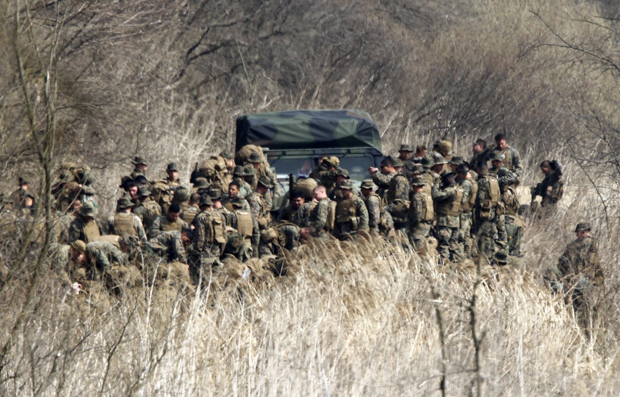 BROOKLYN, N.Y. (CNS) — While North Korea marked the April 15 anniversary of its founder’s birth with flowers and remembrances, rather than more threatening rhetoric and missile tests, concerns about a nuclear attack on the U.S. continued to loom.

Following weeks of war threats, April brings two significant anniversaries for North Korea. One was April 15, which would have been the 101st birthday of North Korea’s late founding father, Kim Il Sung. On April 25, the country planned to mark the anniversary of the creation of the North Korean Army. Both anniversaries were being seen as potential occasions for strong military displays.

“It’s most likely just threats, but I am a bit worried about rash actions,” said Mitchell Lee, 18, a parishioner of St. Paul Chong Ha Sang in Flushing.

“I think the new leader (Kim Jong Un, grandson of Kim Il Sung) is lacking leadership,” Lee told The Tablet, newspaper of the Brooklyn Diocese. “He’s threatening, maybe bluffing, to affirm his leadership because he’s young and not many accept him as their leader.”

Lee’s uncle, who lives in the Seoul region of South Korea, has told him that based on North Korea’s history, people there are concerned, “but not seriously worried about a war.”

That is the same sense Cecilia Chong said she has gotten from her cousins in South Korea.

“The feeling, at least what I have been told, is that he (Kim Jong Un) is just bluffing and soon things will calm down,” said Chong, a parishioner of St. Robert Bellarmine Parish in Bayside.

“We, in America, are more nervous than they are. I’m very nervous because I’m going (to South Korea) in July,” she said. It will be her first trip home since coming to the U.S. in 1977. “My husband and I are taking our son for the first time.”

She noted that many Koreans believe 30-year-old Kim is simply posturing and making threats to gain the respect of his military and his people, and perhaps even more importantly, to establish himself as a leader on the world stage.

“We know it has to come to an end but the question is, how will it end?” Chong said.

At Holy Spirit Church in Borough Park, parishioners are “praying hard for a peaceful resolution,” said Father Heebong Nam, pastor, who emigrated from Seoul in 1981.

Like Lee and Chong, he has heard from parishioners that their relatives in South Korea are more calm about the situation than people in the U.S.

Looking at Kim’s actions, Father Nam said, “He’s using old methods. His father used to try to draw the (negative) attention of the world. But the intensity is different this time. We don’t know who is behind him and that makes me worry.”

Although Kim was handpicked by his father to succeed him, the priest noted that does not mean the nation’s military generals and soldiers accept him.

“To have the army’s respect, he has to show something to them, show that he can go against the Americans,” said Father Nam, who fears the young leader may “do something just not to look like a petulant child. I don’t know which way he’s going to go.”

Under supreme leader Kim, North Korea announced it launched a rocket in December and conducted its third underground nuclear test in February.

In March, the U.N. Security Council condemned the nuclear test and imposed tougher sanctions on North Korea, including financial restrictions, cargo inspections and a ban on exports. On March 30, North Korea announced that Kim had declared a “do-or-die” battle against invasion after a U.S. stealth bombers drill.

In an April 9 television announcement, the government advised foreign institutions and enterprises, including tourists, to take measures to prepare for evacuation and their safety in case of war.

As for a peaceful resolution, Father Nam said, “Anything is possible. … We have to offer special sacrifices for that purpose and God will give us the chance to make it right peacefully.”

“The key is prayer,” added Deacon Paul Kim, a fourth-year theology student whose roots are in Seoul. Noting that Jesus always sought to help sinners, he said, “We are praying for him (Kim Jong-un). We pray he feels the love of Christ and retracts his threats.”

NEXT: Battle with the devil: Pope Francis frames the fight in Jesuit terms