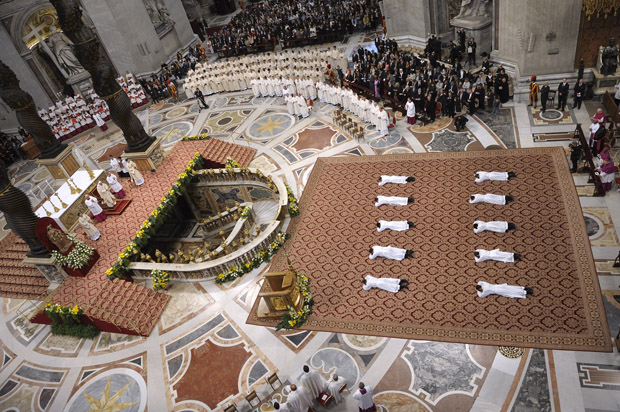 VATICAN CITY (CNS) — Before ordaining 10 men to the priesthood, Pope Francis prayed privately with them in the sacristy and entrusted them to Mary’s care.

The private moment April 21 was a repeat of a practice he began as bishop before celebrating an ordination Mass, according to Vatican Radio.

The 10 new priests — six Italians, two Indians, a Croatian and an Argentine — had prepared for the priesthood in one of three Rome diocesan seminaries.

Pope Francis’ homily, the Vatican said, was basically the text suggested for ordinations by the Italian bishops’ conference, although Pope Francis added personal remarks and observations as he delivered it.

He told the new priests they would have “the sacred duty of teaching in the name of Christ the teacher. Impart to everyone the word of God which you have received with joy.”

The pope, who frequently mentions the wisdom and lessons he learned from his grandmother, told the men, “Remember your mothers, your grandmothers, your catechists, who gave you the word of God, the faith — the gift of faith.”

In looking at the pastoral and sacramental ministry the men will be called to carry out, Pope Francis told them to “never tire of being merciful” in gathering people into the church through baptism and forgiving sins in the name of Christ and the church.

“You will comfort the sick and the elderly with holy oil,” he said. “Do not hesitate to show tenderness toward the elderly.”

Pope Francis told the new priests to remember they are chosen from among the faithful and “appointed on their behalf for those things that pertain to God. Therefore, carry out the ministry of Christ the priest with constant joy and genuine love, attending not to your own concerns, but to those of Jesus Christ.”

“You are pastors, not functionaries,” he told them. “Be mediators, not intermediaries.”

The ordinations are traditionally part of the pope’s celebration of the World Day of Prayer for Vocations, which takes place on the fourth Sunday of Easter each year when the Gospel reading presents Jesus as the good shepherd.

Reciting the “Regina Coeli” prayer at midday with tens of thousands of people in St. Peter’s Square, Pope Francis said the day’s Gospel reading says the sheep hear Jesus’ voice and follow him. “This is a beautiful parable.”

“The mystery of the voice is striking; from the time we are in our mother’s womb we learn to recognize her voice and that of our dad,” he said. “From the tone of a voice we can perceive love or contempt, affection or coldness.”

“The voice of Jesus is unique,” Pope Francis said. “If we learn to distinguish it, he will guide us on the path of life, a path that leads us even beyond the abyss of death.”

The pope asked young people to listen carefully for Jesus’ voice and to ask for help in discerning his call, his plan for their lives, and then have the courage to follow him.

A group of young people in the square began chanting the pope’s name in Italian — “Francesco.”

“Thank you very much for the greeting,” he said. “But greet Jesus, too. Shout ‘Jesus, Jesus’ loudly.”