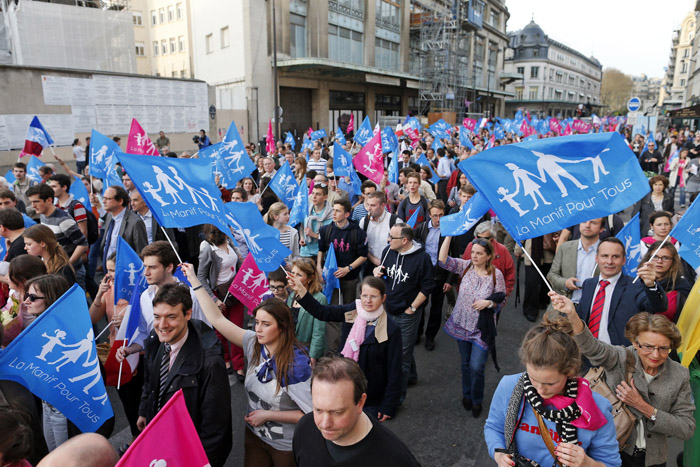 OXFORD, England (CNS) — Heads of Catholic bishops’ conferences in France and Spain warned that the promotion of same-sex marriage could threaten social peace.

“These long months of debate on the bill to allow marriage for persons of the same sex have highlighted predictable divisions,” said Cardinal Andre Vingt-Trois of Paris.

Addressing the French bishops’ spring plenary in Lourdes April 16, the cardinal said his country was witnessing “an organized and militant invasion by gender theory,” signaled by the rejection of “any difference between sexes as a means of human identification.”

“We need to restore to all Spaniards the right to clear recognition in law as husband and wife and recover a legal definition of marriage which does not ignore the specifics of one of social life’s most important institutions,” the cardinal told the Spanish bishops’ plenary in Madrid.

“This is not something which supposedly affects only the private life of individuals. The basic structure of society is at stake,” he said.

France’s “Marriage for All” bill, introduced in November by the government of President Francois Hollande, would allow gay and lesbian couples to marry and adopt children. The legislation, which Hollande committed to in his election campaign, has been bitterly opposed by the Catholic Church, to which two-thirds of France’s 60 million inhabitants traditionally belong.

Cardinal Vingt-Trois said the “impressive mobilization” by opponents of the same-sex bill had revealed “deep preoccupation and real unease” and should not be dismissed as “retrograde and homophobic confessional mania.”

“The fact that all means have been used to avoid a public debate, including in the parliamentary process, can barely disguise the embarrassment of this law’s promoters,” said the cardinal.

More than 22,000 same-sex marriages have taken place under Spain’s 2005 same-sex law, Europe’s first to allow same-sex marriage and child adoption. Although the Constitutional Court rejected challenges to the law, the bishops have urged political parties to unite to overturn it.

Spain’s bishops met as Prime Minister Mariano Rajoy visited the Vatican April 15 for talks with the pope, which were said to have covered the country’s economic and social hardships and the need for dialogue.

In his address, Cardinal Rouco said the same-sex marriage law was one of several issues threatening “the delicate balance of social peace,” and the “reconciliation, unity and rule of law” enshrined in Spain’s 1978 democratic constitution.

Both cardinals also criticized abortion, euthanasia, the secularization of education and mistreatment of illegal immigrants.