Safeguarding creation expected to be major theme at WYD in Rio 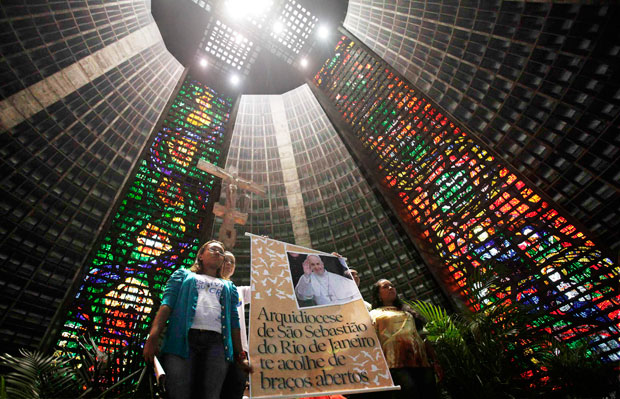 Youths hold up a banner with a message of welcome for Pope Francis during Palm Sunday Mass in Rio de Janeiro's cathedral March 24. The new pope will travel to Rio in July to take part in the international World Youth Day gathering. (CNS photo/Ricardo Morales, Reuters)

VATICAN CITY (CNS) — When hundreds of thousands of young Catholics gather with Pope Francis in Rio de Janeiro in the summer, reflections on safeguarding the environment will be part of the program.

Like earlier editions of World Youth Day, the July celebration in Rio de Janeiro will include morning catechetical sessions and afternoon cultural events.

“From the beginning of planning — under Pope Benedict XVI — we thought that a major theme in Brazil, known as ‘the lungs of the world,’ would have to be the environment,” said Marcello Bedeschi, president of the John Paul II Foundation for Youth, a Rome-based organization that assists with World Youth Day planning.

“We did not know that there would be a new pope and that in his first three major addresses, he would speak about safeguarding creation, not in political or ideological terms, but as a Christian obligation,” Bedeschi said.

Corrado Clini, Italy’s environment minister, has been working with the foundation, the Pontifical Council for the Laity, the Brazilian government and the Rio church’s World Youth Day organizing team to promote the reflection of young people on the importance of biodiversity and protecting the environment. He also is working to encourage cooperation between several Italian and Brazilian companies to reduce the energy and water used at WYD and to recycle as much of the refuse they produce as possible.

At an April 4 news conference at the Vatican, Clini said the fact that the youth gathering will take place one year after the international community gathered for Rio +20 — a U.N. sponsored conference on sustainable development — is a great opportunity to rally the passion Catholic youths have for protecting the world God created.

As the United Nations attempts to draft and build consensus around a set of “Sustainable Development Goals” as a follow-up to the conference, “grass-roots support and participation is essential,” Clini said.

“World Youth Day is the best context for expanding this vision of global solidarity,” which includes a commitment by industrialized nations to moderate their consumption habits, promote development in poor countries and share with them the knowledge and technology they need to build their economies without threatening the environment.

The Catholic Church can have a big impact on promoting the goals because it has an ability to bring moral teachings — including those about safeguarding creation — into the hearts, minds and daily lives of its faithful, the minister said.

WYD 2013 is scheduled for July 23-28. The special reflection on the environment is scheduled for the second day of the gathering. Clini, his Brazilian counterpart, scientists, theologians, U.N. officials and members of Catholic groups devoted to safeguarding creation will lead the reflection with young people.

At the end of the gathering, the youths are expected to issue a “manifesto for safeguarding creation,” which will be drafted with assistance from Conventual Franciscan friars from Assisi, Italy.