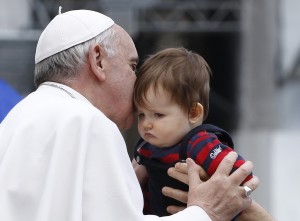 VATICAN CITY (CNS) — Women have a privileged role in the church because of their ability to pass on the faith through love, Pope Francis said.

“Women have had and still have a special role in opening doors to the Lord, in following him and communicating his face, because the eyes of faith always need the simple and profound look of love,” the pope told an estimated 50,000 people in St. Peter’s Square April 3.

“This is the mission of women, of mothers and women, to give witness to their children and grandchildren that Christ is risen,” he said. “Faith is professed with the mouth and heart, with the word and love.”

In the second weekly public audience of his pontificate, Pope Francis resumed a series of catechetical talks on the creed begun by Pope Benedict XVI in January.

Commenting on the words, “rose again on the third day in accordance with the Scriptures,” the pope noted that the New Testament gives women a “primary, fundamental role” as witnesses of Jesus’ resurrection. He cited the passage in Mark Chapter 16 in which women find an empty tomb and an angel who tells them that Jesus is alive.

“Here we can see an argument in favor of the historical truth of the resurrection,” Pope Francis said. “If it had been an invention, in the context of that time it would not have been linked to the testimony of women,” since the Jewish law of period did not consider women or children as “reliable, credible witnesses.”

Jesus’ male apostles and disciples “find it harder to believe in the risen Christ,” the pope said. “Peter runs to the tomb, but stops before the empty tomb. Thomas has to touch the wounds of the body of Jesus with his own hands.”

By contrast, the “women are driven by love and they know to accept this proclamation (of the resurrection) with faith,” the pope said. “They believe and immediately transmit it; they do not keep it for themselves.”

“Let us also have the courage to go out to bring this joy and light to all the places of our lives,” the pope said, eliciting cheers from the crowd, as at several other moments in his talk. “The resurrection of Christ is our greatest certainty, it is our most precious treasure. How can we not share this treasure, this beautiful certainty with others?”

“Unfortunately, there have often been attempts to obscure faith in the resurrection of Jesus, and doubts have crept in even among believers themselves,” Pope Francis said, lamenting what he called a “rosewater”-like faith, diluted by superficiality, indifference, other priorities or a “purely horizontal vision of life.”

Hope in the resurrection, he said, enables Christians to “live everyday realities with more confidence, to face them with courage and commitment.”

Following the audience, the pope spent about 45 minutes personally greeting prelates and other dignitaries, as well as members of the general public, including many small children and disabled people in wheelchairs.

In what has already become a common sight during his young papacy, a number of pilgrims, including a group of Jesuit deacons studying in Rome, broke Vatican protocol by embracing Pope Francis and kissing him on both cheeks.

PREVIOUS: Safeguarding creation expected to be major theme at WYD in Rio