Audit shows number of abuse allegations in church dropped in 2012 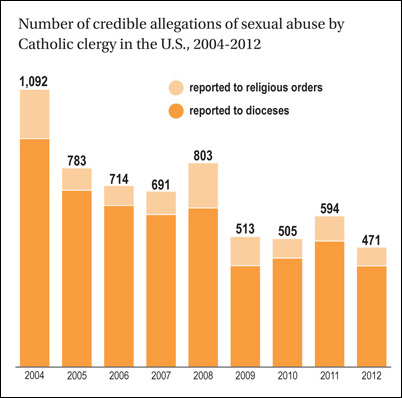 WASHINGTON (CNS) — The annual audit of diocesan compliance with the U.S. Catholic Church’s “Charter for the Protection of Children and Young People” found a drop in the number of allegations, number of victims and number of offenders reported in 2012.

Georgetown University-based Center for Applied Research in the Apostolate, which gathered data for the report, found “the fewest allegations and victims reported since the data collection for the annual reports began in 2004.”

Most allegations reported last year were from the 1970s and 1980s with many of the alleged offenders already deceased or removed from active ministry.

StoneBridge Business Partners, which conducts the audits, said law enforcement found six credible cases among 34 allegations of abuse of minors in 2012. The credibility of 15 of the allegations was still under investigation. Law enforcement officials found 12 allegations to be unfounded or unable to be proven, and one was a boundary violation.

Almost all dioceses were found compliant with the audit. Three dioceses were found to be noncompliant with one article of the charter. The Diocese of Lake Charles, La., was cited since its review board had not met in several years. The Diocese of Tulsa, Okla., was listed because auditors could not determine if parishes provided safe environment training to religious education students and volunteer teachers. The Diocese of Baker, Ore., also was cited because students did not receive safe environment training while a new program was being developed, but the training has now resumed.

The annual report (read the full report here) has two parts. The first is the compliance report of StoneBridge — based in Rochester, N.Y. — which conducted on-site audits of 71 dioceses and eparchies and reviewed documentation submitted by 118 others. The Diocese of Lincoln, Neb., and five Eastern-rite dioceses, known as eparchies, refused to be audited, as they had in past years. Under canon law, dioceses and eparchies cannot be required to participate in the audit, but it is strongly recommended.

Al Notzon III, chairman of the National Review Board, which oversees the audits, said in the introduction to the report that it is his understanding “all of the dioceses will be included in next year’s audit.” 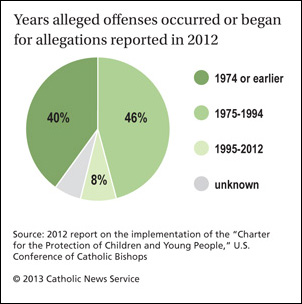 “We need to work with each of the eparchies to see how they can be included in the audit so that there will be 100 percent compliance with the audit process,” he added. “For the sake of our young people, their well-being, their safety, and their faith, we can do no less.”

The second part of the report is the “2012 Survey of Allegations and Costs,” conducted by CARA. The Lincoln Diocese refused to cooperate with the survey, and the Eparchy of Our Lady of Lebanon of Los Angeles did not respond by the cut-off date.

The audit cited limitations, including “the unwillingness of most dioceses and eparchies to allow us to conduct parish audits during their on-site audits.” It said that “the auditors must rely solely on the information provided by the diocese or eparchy, instead of observing the program firsthand.”

It said another limitation is staff turnover in diocesan child abuse prevention programs which causes records to be lost and successors to be placed in key roles without formal orientation.

Notzon echoed these concerns in a letter to Cardinal Timothy M. Dolan of New York, president of the U.S. Conference of Catholic Bishops, stressing the importance of good record-keeping and the significance of involving parishes in the audit process.

His letter and a letter from Deacon Bernie Nojadera, head of the U.S. bishops’ Secretariat of Child and Youth Protection, also acknowledged recent setbacks in the church’s efforts to stop abuse. Notzon cited current “disturbing news in the media” and Deacon Nojadera said “recent high-profile failings” have undermined the bishops’ efforts.

Recent news includes the May 2 resignation from active ministry of Father Michael Fugee, a Newark, N.J., archdiocesan priest, after reports surfaced of his being with minors in an apparent violation of a court’s memorandum of understanding forbidding him from having contact with underage individuals.

In February, records were released from the Archdiocese of Los Angeles suggesting that now-retired Los Angeles Cardinal Roger M. Mahony and Los Angeles Auxiliary Bishop Thomas J. Curry, who was the archdiocese’s vicar of clergy and chief adviser on sexual abuse cases, worked to protect priests from criminal investigation beginning in the 1980s.

In a statement when the records were made public, the archdiocese noted that Cardinal Mahony “has expressed his sorrow for his failure to fully protect young people entrusted to his care” and “stated time and time again” he made mistakes, “especially in the mid-1980s.” Bishop Curry, it said, also has “publicly apologized for his decisions while serving as vicar for clergy.”

Notzon in his letter noted that church officials need to recognize “that protecting children from sexual abuse is a race without a finish and more rather than less effort is necessary to keep this sacred responsibility front and center.”

In a preface to the report, Cardinal Dolan stressed the importance of protecting children and young people in the church and continuing to work “to promote healing and reconciliation for those harmed in the past.”

In gathering data from dioceses, CARA noted there were 397 allegations, most of them from decades past, against 313 priests or deacons, by 390 individuals. About 84 percent of the victims were male. Half were between 10 and 14 when the abuse began. An estimated 17 percent were between 15 and17, and 19 percent were under age 10.

Dioceses and eparchies that responded to the survey reported costs related to allegations at $112,966,427 in 2012. Expenses covered settlements, attorney fees, therapy for victims and support for offenders. The total amount expended for dioceses, eparchies and religious orders was $148,338,437. Dioceses and religious orders also spent $26,583,087 for child protection programs.

NEXT: Bishops say full effect of ‘redefining marriage’ will be felt for years