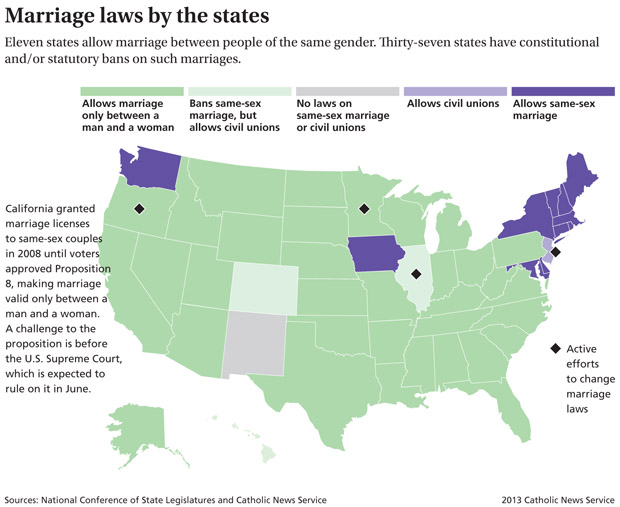 ST. PAUL, Minn. (CNS) — The “full social and legal effects” of state lawmakers’ decision to legalize same-sex marriage “will begin to manifest themselves in the years ahead,” said the Minnesota Catholic Conference.

“Today the Minnesota Senate voted to redefine marriage in Minnesota. The outcome, though expected, is no less disappointing,” the conference said in a statement.

The state Senate in a 37-30 vote gave final approval May 13 to a same-sex marriage bill. The state House passed the measure May 9. Minnesota Gov. Mark Dayton signed it May 14.

The law is to take effect Aug. 1, making Minnesota the 12th state to allow same-sex couples to marry. Earlier in May, Rhode Island and Delaware became the 10th and 11th states, respectively, to legalize same-sex marriage.

“The church, for its part, will continue to work to rebuild a healthy culture of marriage and family life, as well as defend the rights of Minnesotans to live out their faith in everyday life and speak the truth in love,” said the Minnesota Catholic Conference, the public policy arm of the state’s bishops.

“Some wish to believe that sexual relationships outside of the marital context of husband and wife are innocuous, choosing to ignore the fact that they are actually harmful to individuals and to society as a whole,” said Archbishop Salvatore J. Cordileone of San Francisco, chairman of the U.S. bishops’ Subcommittee for the Promotion and Defense of Marriage.

“There are many of us Americans, including many Minnesotans, who stand for the natural and true meaning of marriage,” he said in a statement release late May 14. “They know that men and women are important; their complementary difference matters, their union matters, and it matters to kids. Mothers and fathers are simply irreplaceable.”

Archbishop Cordileone called it “the height of irony” that the final vote on “the redefinition of marriage” and the governor’s signature on the bill occurred just a day “after we celebrated the unique gifts of mothers and women on Mother’s Day.”

In November, Minnesota voters rejected a ballot measure to amend the state constitution to define marriage as only a union between a man and woman, but polls show Minnesotans remained sharply divided over legalizing such unions. According to Minnesota Public Radio, a recent survey showed a majority are against same-sex marriage.

The measure changes the definition of marriage from “between a man and a woman” to “a civil contract between two persons.” A prohibition against marriage between relatives, such as first cousins, remained in place.

In a statement about the earlier House vote, the conference said lawmakers by approving same-sex marriage “set in motion a transformation of Minnesota law that will focus on accommodating the desires of adults instead of protecting the best interest of children.”

“This action is an injustice that tears at the fabric of society and will be remembered as such well into the future,” it said.

The Catholic conference said the bill posed “a serious threat to the religious liberty and conscience rights of Minnesotans.”

It includes legal protections for clergy and religious groups that don’t want to marry same-sex couples, but the conference said lawmakers failed “to protect the people in the pew — individuals, non-religious nonprofits, and small business owners who maintain the time-honored belief that marriage is a union of one man and one woman.”

According to the conference, lawyers on both sides of the issue have stated that no accommodations for “the deeply held beliefs of a majority of Minnesotans will result in numerous conflicts that will have to be adjudicated by our courts.”

In a separate statement issued after the House vote, Duluth Bishop Paul D. Sirba said the church “will continue to uphold and propose to the world what we know, through sound reason and through divine revelation, to be the authentic nature of marriage: a permanent union between one man and one woman, uniting a mother and a father with any children produced by their union.”

No civil authority, he said, “has the authority or competence to redefine marriage. Civil authorities have the obligation to protect and defend true marriage for the sake of justice and the common good.”

Bishop Sirba acknowledged that many disagree with the church’s stand on the issue and expressed dismay over the negative tone the debate over same-sex marriage has taken toward the church.

“We are particularly mindful of our brothers and sisters who have same-sex attractions,” he said. “Our hearts break that this debate has often been used as an occasion to sow mistrust and doubt, as if followers of the God who is love, and whose love for all people we proclaim each day as the body of Christ, are acting instead out of some sort of ill will.”

“To all those with same-sex attraction, we continue to extend our unconditional love and respect. For those who have heard God’s call and respond in faith, hope and love, striving to walk in his ways, we also offer our pastoral support,” the bishop added.

In Rhode Island May 2, Gov. Lincoln Chafee signed into law a bill to legalize same-sex marriage in that state. Bishop Thomas J. Tobin of Providence expressed “profound disappointment” that the measure to “legitimize same-sex marriage” passed the Legislature.

In an open letter to the state’s Catholics, he said the Catholic Church has fought very hard to “oppose this immoral and unnecessary proposition,” and that God would be the final arbiter of people’s actions.

Same-sex marriage became legal in Delaware May 7; the law goes into effect July 1.

In an April 15 letter to Delaware legislators, Bishop W. Francis Malooly of Wilmington said marriage “is a unique relationship between a man and a woman” and it’s not the government’s place to “define or redefine” it.

Contributing to this story was Rick Snizek in Providence. He is editor of the Rhode Island Catholic, newspaper of the Providence Diocese.