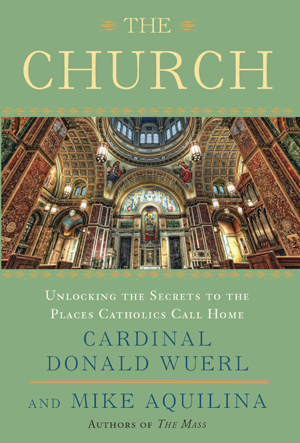 WASHINGTON (CNS) — In their book “The Mass: The Glory, the Mystery, the Tradition,” co-authors Cardinal Donald W. Wuerl of Washington and Mike Aquilina wrote about the Mass, the place “where heaven meets earth” as Catholics receive Christ in the Eucharist and then are called to go forth and bring Christ to the world.

From the opening procession to the closing prayer, they examined how each aspect of the Mass is rooted in Scripture and church teaching and tradition, and how today’s Masses are a continuation of the way the first Christians worshipped.

In their latest book, “The Church: Unlocking the Secrets to the Places Catholics Call Home,” Cardinal Wuerl and Aquilina offer a tour of the backdrop and setting for Mass — the church buildings where Catholics pray.

“Every part of a church is rich in meaning and mystery, theology and history. Every furnishing or ornament reveals some important detail of the story of our salvation,” they write.

Rather than produce a guidebook, the authors said their goal is to help deepen people’s understanding of the features of a typical Catholic church so they can better pray and encounter God there. Churches, they write, “are temples of the living God who wills and wishes to meet you there.”

Cardinal Wuerl approached the project from his perspective as a priest who has celebrated Mass at the altar for 46 years, and Aquilina offered his perspective as a Catholic layman who has prayed with his family “in the pews of hundreds of churches and tried to see the arches and vaults, ceilings and cloisters through his children’s eyes.”

“The Church: Unlocking the Secrets to the Places Catholics Call Home” is published by Image, an imprint of the Crown Publishing Group, a division of Random House, Inc. The new book is a companion volume to their earlier book on the Mass, which is now in paperback.

Every Catholic church — from those whose steeples rise in small towns to cathedrals nestled amid skyscrapers — “is, by definition ‘holy ground.’ … God is present there,” the authors write.

They note that every Catholic church tells a love story — a story of a community’s love for God, and God’s love for them, a love fulfilled in the Eucharist and by how they in turn bring Christ’s love to the world. The grandeur in a simple country church or in a gothic cathedral provides people from generation to generation the chance to offer praise and thanksgiving to God.

Just as they did with their book on “The Mass,” Cardinal Wuerl and Aquilina in this new book offer readers a walk through the meaning and history of each feature in a Catholic church building, so they can deepen their experience of worshipping God in their parish church during Mass.

For example, they note that bells, part of the soundtrack of life in a church’s neighborhood, “are the insistent and very public voice of the church, summoning the whole world to prayer.”

When Catholics dip their hands in a holy water font near the church’s entrance, they are repeating a gesture made by Catholics from the times of the early church, a tradition that fosters remembrance of their baptismal promises.

They note that the humble poor box located near the back of church points to how loving and serving the poor is in itself “an act of worship” and central to the life of Christian communities from the church’s beginning.

The flickering lights of votive candles, they write, serve as a sign of God’s presence, and of people’s prayers, and the paschal or Easter candle used at the Easter Vigil and at baptisms and funerals signifies Christ’s light amid the world’s darkness.

Sacred images of the saints and Mary in different artistic media are meant to remind people of their call to holiness and to follow Christ. “Sacred art points beyond itself, to heaven, which touches earth in sanctuaries of Catholic churches,” the authors write. And they noted that the ornate tabernacles in every Catholic church are a place of Jesus’ constant presence, where the eucharistic hosts consecrated during Mass are reserved.

Cardinal Wuerl and Aquilina tell readers that every visit to a church should be a homecoming — a reminder of who they are and what God calls them to be. By ending the book with the dismissal at Mass, the authors emphasize that the story doesn’t end when people leave Mass and walk out of the doors of church, because Massgoers are called to go share Christ’s love with others.

NEXT: U.S. bishops’ second annual Fortnight for Freedom to be June 21-July 4