WASHINGTON (CNS) — The U.S. bishops’ second annual Fortnight for Freedom — a period of prayer and fasting to raise awareness of challenges to religious liberty, both nationally and internationally — is planned for June 21 to July 4.

The website www.Fortnight4Freedom.org has details of fortnight events and suggested activities for parishes and families, as well as fact sheets, educational resources and suggested prayers for the observance.

The site includes a study guide on the Second Vatican Council’s Declaration on Religious Freedom, “Dignitatis Humanae,” and quotes about religious freedom from the nation’s Founding Fathers and the writings of Blessed John Paul II and Pope Benedict XVI. 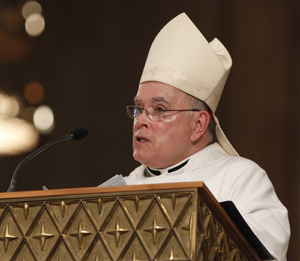 Archbishop Charles J. Chaput delivers the homily during Mass at the Basilica of the National Shrine of the Immaculate Conception in Washington July 4, 2012, the final day of the bishops’ “fortnight for freedom” campaign last year. The observance was a two-week period of prayer, education and action on preserving religious freedom in the U.S., to be repeated this year. (CNS photo/Bob Roller)

The Catholic Church and other faith groups object to the requirement “coercing us to violate our deeply held beliefs,” the archbishop said in a statement.

During the fortnight, the Supreme Court’s decisions on the definition of marriage “will likely be handed down as well,” he added, referring to rulings the court is expected to issue in late June on two same-sex marriage cases. One is a challenge to the constitutionality of California’s Proposition 8, a voter-approved initiative banning same-sex marriage, and the other is a challenge to the federal Defense of Marriage Act.

“Those decisions could have a profound impact on religious freedom for generations to come,” Archbishop Lori said.

NEXT: Father Greeley, sociologist and best-selling author, dies at 85