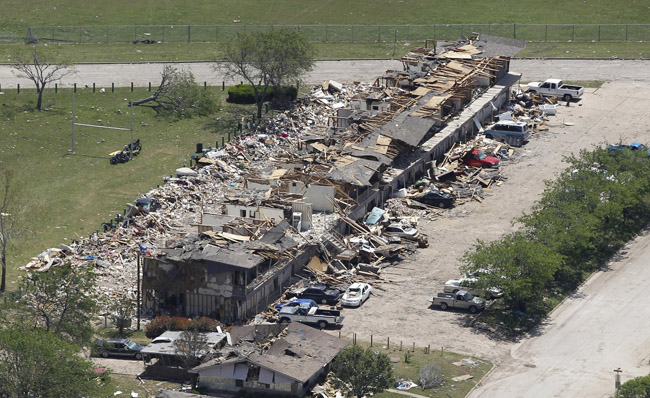 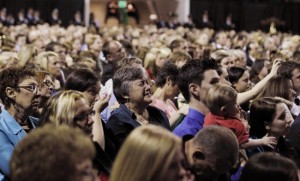 WEST, Texas (CNS) — The town of West all but shut down April 25 as most of its 2,800 residents headed to Baylor University in Waco, 20 miles south, for a memorial service for the first responder victims of an April 17 factory explosion.

A dozen flag-draped coffins accompanied by photos of the lives they represented lined the front of the university’s Farrell Center for a public memorial service attended by President Barack Obama.

Visiting Waco after attending the dedication ceremony in Dallas for the presidential library of his predecessor, President George W. Bush, Obama first flew by helicopter over the blast site in West to see the damage.

After tributes to the emergency workers who made up the majority of the 15 people killed, Obama offered his condolences and words of hope to the people of West and the thousands more who filled the sports arena.

“I see in the people of West, in your eyes, that what makes West special, isn’t going to go away,” Obama said. “Instead of changing who you are, it’s revealed who you always were.”

In West, the weeks after a massive blast at West Fertilizer Inc., had been filled with a series of funerals. At least eight funerals were scheduled for the town’s sole Catholic church, Assumption Parish.

The parish website has included schedules of wakes and funerals for parishioners and other town residents. The predominantly Catholic town was settled by Czech immigrants who retain their heritage with Czech restaurants and a bakery and an annual Westfest, focused on cultural traditions.

The dead included Joey Pustejovsky, son of the parish secretary. He served as city secretary, effectively its manager, and a volunteer firefighter, one of 12 emergency workers killed. The others included two tenants of a nearby apartment complex that had the wall blown off of one side, and a 96-year-old retired farmer, Adolph Lander, a resident of a nursing home who was injured as he and other residents were being evacuated as a fire at the plant grew.

The explosion, strong enough to register as a mild earthquake felt 50 miles away, destroyed the plant, a school, nursing home, apartment block and nearby homes, and severely damaged hundreds of buildings within a five-block radius.

Inspectors reported to the city council April 25 that just three of 157 damaged homes were safe, 70 others are unsafe and uninhabitable, and 84 houses were damaged but could safely be open for limited access.

As the town’s public works agencies struggled to restore water, gas and electrical service to the damaged areas, the St. Vincent de Paul Society was overseeing assistance from Catholic organizations. Austin Bishop Joe S. Vasquez had asked parishes in the diocese to hold special collections to aid in the relief efforts.

“We meet one-on-one with victims to do a complete assessment of their situation and their needs, and we stay with them until those needs are met,” the statement said. “That approach greatly enhances outcomes and long-term stability for survivors.”

PREVIOUS: New magazine for women set for May debut