Memorial Mass honors ‘countless sacrifices’ made by those in military

WASHINGTON (CNS) — “We give thanks for countless sacrifices and we pray for the families who still suffer the ravages of war. Those scars do not fade easily,” said Archbishop Timothy M. Broglio of the Archdiocese for the Military Services, at a May 19 memorial Mass honoring the nation’s war dead and those “wounded warriors” injured in the line of duty. 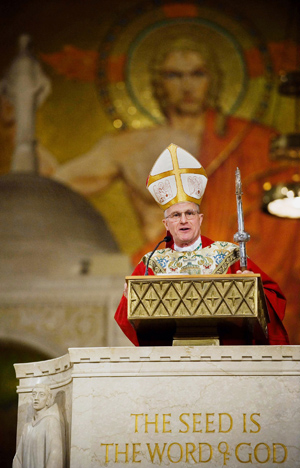 “Those afflicted in mind and body and those who love them still pay the price for defending our way of life,” Archbishop Broglio said in his homily at the Mass, celebrated at the Basilica of the National Shrine of the Immaculate Conception in Washington.

The memorial Mass was the military archdiocese’s 19th annual liturgy held in remembrance of the nation’s war dead.

“We are able to be here in prayer,” Archbishop Broglio said, “because women and men have set aside their security, their plans, their families and what is familiar in order to serve this nation whose foundation is based on principles: ‘We hold these truths to be self-evident, that all men are created equal, that they are endowed by their Creator with certain unalienable rights; that among these are life, liberty and the pursuit of happiness.'”

He added, “Those sentences from the Declaration of Independence mean that the United States was not established, because of a common ethnic or racial origin, or a common language, or those other elements that characterize many other nations of the world. It is based on certain self-evident truths: life, liberty, and the pursuit of happiness.

“We also pray for the fallen so that they might also dwell in the presence of the Author of all. Many are buried not far from here in Arlington National Cemetery,” Archbishop Broglio said.

“Do not those rows of white markers urge us to beg the Holy Spirit to move the minds and hearts of those who govern to seek peace, to engage in dialogue, and to consider the force of arms as a last resort?”

Archbishop Broglio serves as national spokesman for the Catholic Cemetery Conference’s Memorial Day weekend project, “Serving God and Country: A Memorial Day Salute to Our Heroes.” More than 2,000 cemeteries across the country were scheduled to participate in the project with such activities as wreath-laying ceremonies, tribute boards and military choirs.

The archbishop also noted in his homily that May 24 he was scheduled to lead a group of wounded warriors and their families from the U.S. to the Shrine of Our Lady of Lourdes in France for the 55th International Military Pilgrimage, which draws soldiers and family members from 35 countries. The U.S. military archdiocese, the Knights of Columbus and the Lourdes Volunteers organization were co-sponsoring the trip.

As for those who never made it back home, “the remains of others rest in France, Italy, Germany, and elsewhere,” Archbishop Broglio said at the shrine. “Those of Father Emil Kapaun (a Korean War chaplain whose sainthood cause has been advanced) have never been found. However, he and all the rest continue to live in the hearts of their loved ones and in the fabric of this nation.”

NEXT: Peter Claver leader elected to post in international organization