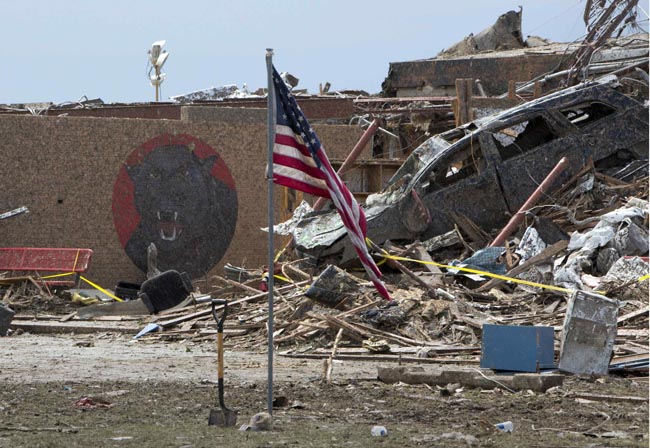 A U.S. flag stands May 21 near a destroyed car in the rubble outside the Plaza Towers Elementary school in Moore, Okla., after a massive tornado struck the previous day. The tornado touched down outside Oklahoma City leaving a 20-mile path of death and destruction. (CNS photo/Richard Rowe, Reuters)

UPDATED — OKLAHOMA CITY (CNS) — Even after the initial death toll was cut by more than half, the human and material devastation of a string of tornadoes that buffeted areas of the Archdiocese of Oklahoma City May 19-20 was incalculable.

“Our first concern is for the victims who have lost their lives or loved ones and suffered injury or loss of property,” said a May 21 statement by Archbishop Paul S. Coakley of Oklahoma City.

“We are moved by the efforts of the first responders who have put their own lives on hold to help in this time of need. We owe them a debt of gratitude and assure them of our prayers,” Archbishop Coakley said.

St. Andrew the Apostle Church in Moore, an Oklahoma City suburb that bore the brunt of the EF5 tornado that hit mid-afternoon May 20, was spared, although it had lost its telephone service in the wake of the twister. Archbishop Coakley told Catholic News Service in a May 21 telephone interview he was planning to visit the site at the conclusion of the interview, adding the church had also lost power and water.

Ordained to the priesthood in the Diocese of Wichita, Kan., Archbishop Coakley said he had been in Wichita attending to matters dealing with the estate of his recently deceased father when he got word of the first round of storms.

“I immediately returned, soon after the storms had gone through. But it was impossible to get into Moore. I-35 has been closed down,” Archbishop Coakley told CNS. “It was just utter chaos there. There was a lot of debris in the roads and utter gridlock.” He added the Our Lady of Guadalupe Youth Camp had suffered “some pretty severe structural damage” in the initial round of tornadoes May 19.

The revised number of those confirmed dead stood at 24, including at nine children, as of midday May 22. News reports also said that more than 200 people were injured.

Archbishop Coakley said the consensus is that this twister “even surpasses the one that’s become even the most well-known one in Oklahoma — May 3, 1999. They’re saying that this one appears to have been even great in terms of damage and property that has been destroyed.” 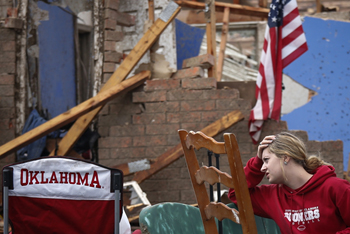 Resident Taylor Tennyson sits in the front yard of her family home May 21 that was destroyed by a tornado the previous day in Moore, Okla. (CNS photo/Adrees Latif, Reuters)

Officials with the Society of St. Vincent de Paul were expected to arrive in Norman by midday May 21 to meet with members of the society’s local conferences in the Archdiocese of Oklahoma City to assess needs of tornado victims throughout the state.

“We’re trying to make a determination of unmet needs and what our appeal will be,” Elizabeth Disco-Shearer, executive director of the society’s south-central region, told Catholic News Service as her three-member team traveled from West, Texas, where she was assisting families who lost homes in a mammoth fertilizer factory explosion April 17.

“We go in and work with the local authorities and integrate into the process. Within the first 72 hours, it’s a fact-gathering mission to determine where we can be most effective,” she said.

Plans call for the agency to bring in specialists in a rapid response team, she added.

Disco-Shearer has been scrambling of late. Her office also was assisting families in the north Texas communities of Granbury and Cleburne struck by violent tornados in mid-May.

“In the south-central region, we certainly need a lot of prayers right now,” she said.

“Catholic Charities OKC and we as an archdiocese will work with many others to ensure a smooth and comprehensive response not only to the immediate needs of those affected by the violent storms, but also to their long-term needs as they rebuild their lives,” Archbishop Coakley said in his statement. 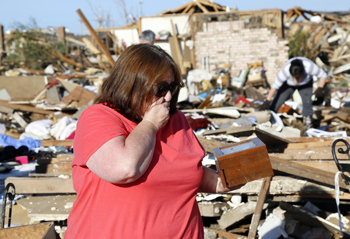 He told CNS, “We’re not as evident as other first responders,” citing the American Red Cross as an example. “We focus on the long-term recovery efforts to help people rebuild their lives long after the disaster’s struck.”

Catholic Charities of the Archdiocese of Oklahoma City planned to send teams into the ravaged areas as soon as possible, said Sonny Wilkinson, associate director for mission advancement. The May 20 twister left a 20-mile path of death and destruction.

In addition to Moore, Wilkinson said teams were planning to head to Edmond and Shawnee.

“None of our parishes suffered any damage,” he said. “We’ll do the assessment and help with immediate needs.”

Meanwhile, Catholic Charities USA’s disaster response program has contact the local agency asking about the assistance it can offer, but Wilkinson said he will not know what is needed until the initial assessments are made.

“They’ve been great in offering assistance,” he said. “We haven’t asked them to come but I imagine that is on the horizon.

Nationally, the Knights of Columbus has sent $10,000 to the Oklahoma state council to assist with the relief effort.

The organization said in a May 21 statement it is waiting for recovery efforts to “calm down” before sending in a team to assess how else it might respond. Supreme Knight Carl Anderson said, “We are deeply saddened by the loss of life and the damage,” and he called for all Knights “to keep those affected in their prayers.”

“Our prayers are with the people of Oklahoma today. And we will back up those prayers with deeds for as long as it takes,” President Barack Obama said in remarks at the White House May 21, a day after he signed a major disaster declaration covering the state of Oklahoma and committing federal aid and resources to five Oklahoma counties.

“As a nation, our full focus right now is on the urgent work of rescue, and the hard work of recovery and rebuilding that lies ahead,” Obama said.

“There are homes and schools to rebuild, businesses and hospitals to reopen, there are parents to console, first responders to comfort, and, of course, frightened children who will need our continued love and attention,” he added.

“Our hearts ache with you,” Cardinal Timothy M. Dolan of New York, president of the U.S. bishops’ conference, said in a May 21 letter to Archbishop Coakley. “The deaths of so many, especially beloved children in their school, call us to join you and the faithful of the Archdiocese of Oklahoma City in prayer for the consolation of all who feel this terrible loss,” he added.

“The experience of loss of family members, homes, neighborhoods, and even the local hospital, shows a devastation that impels us to stand with you and all the good people of Moore both in prayer for comfort and in efforts for disaster relief to ease the suffering of those whose lives have been affected by this dreadful disaster,” Cardinal Dolan said.

Contributing to this story were Mark Pattison, Dennis Sadowski and Patricia Zapor in Washington.

NEXT: Cardinal urges young adults to deepen their Catholic faith, share it