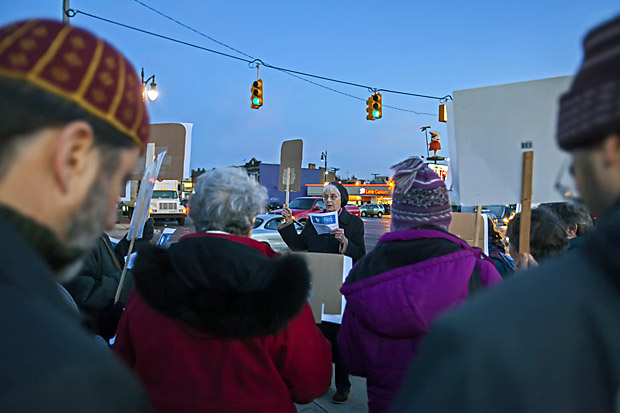 WASHINGTON (CNS) — Human trafficking is so widespread that congregations of women religious are uniting in a nationwide effort to limit its reach.

The effort will focus on broader education about sex and labor trafficking, legislative advocacy for stricter laws and penalties for traffickers and wider support for victims through much-needed social services and employment.

“It’s a stronger voice,” said Mercy Sister Jeanne Christensen, justice advocate for the Sisters of Mercy West Midwest Community in Kansas City, Mo. “Coming together in one group helps to concentrate the voice and the power in a good sense.”

The collaborative campaign was formalized during a three-day meeting of representatives of a dozen congregations active in anti-trafficking programs in local communities and the Leadership Conference of Women Religious in mid-April in Washington.

The meeting coincided with the release of a report by the presidential Advisory Council on Faith-Based and Neighborhood Partnerships offering 10 recommendations to President Barack Obama’s administration aimed at eradicating human trafficking.

For years individual congregations, such as the Sisters of the Humility of Mary of Villa Maria, Pa., have run human trafficking awareness programs regionally. Sister Margaret Nacke, a member of the Sisters of St. Joseph of Concordia, Kan., who helped convene the gathering, told Catholic News Service it is time for the congregations to come together to better make use of the anti-trafficking resources and programs they had developed.

“Some met for first time. Others knew each other from working together,” Sister Margaret said.

“In our dialogue with government, nongovernment organizations and church officials, we sisters got a better sense of their focus and their thrust in regard to modern day slavery. And they got a better idea of what we sisters are doing,” Sister Margaret said.

The call for greater collaboration stems from Sister Margaret’s research into the trafficking work of religious congregations. Her findings led to the development of the Bakhita Initiative, an Internet-based listing of anti-trafficking programs and resources available from congregations nationwide.

The initiative is named for St. Josephine Bakhita, a Sudanese slave who became a nun after her release. Born in 1869, she was kidnapped at age 7 and sold into slavery. Her kidnappers gave her the name Bakhita, which translated means “fortunate one.” She eventually was freed and was inspired to join religious life. Pope John Paul II canonized her in 2000.

Sister Margaret envisions the online initiative as being a storehouse of human trafficking resources for religious congregations as well as the general public.

During the three days the sisters not only got to know each other, but heard from White House staff, Department of Health and Human Services officials and representatives of the U.S. Conference of Catholic Bishops’ Migration and Refugee Services involved in outreach to trafficking victims.

“We come to this ministry with our own gifts and talents. With this ministry, we sisters don’t do it alone,” said Franciscan Sister Geraldine Nowak, who works in her order’s Justice, Peace and Integrity of Creation Office in Sylvania, Ohio, a suburb of Toledo.

Eleven congregations of women religious in the Toledo Diocese formed Stop Trafficking of Persons, STOP, in 2006. Toledo, a major crossroads between Cleveland, Chicago, Detroit and points south, ranks fourth in the country in the number of arrests, investigations and rescues of children involved in sex trafficking, a 2010 report from the Ohio Trafficking in Persons Study Commission found.

An estimated 100,000 to 300,000 minors are victims of sex trafficking at any given time, according to the Justice Department. Worldwide, about 21 million people are trafficked in an industry that nets traffickers $32 billion annually, the State Department’s 2012 Trafficking in Persons report said.

“This is a crucial point to come together (nationally) because we really want to go about this in terms of best practices,” Sister Geraldine explained. “We want to use both heart and head. It’s important to collaborate and network.”

More information about the Bakhita Initiative can be found online at bakhitainitiative.com.

PREVIOUS: Bishops say full effect of ‘redefining marriage’ will be felt for years