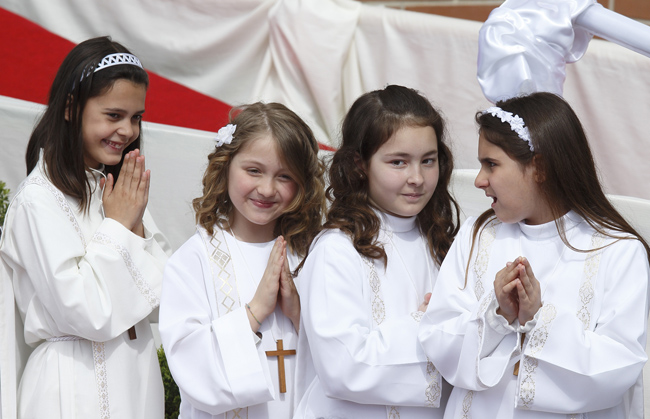 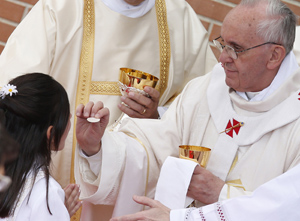 Pope Francis gives first Communion to a girl while celebrating Mass at SS. Elizabeth and Zechariah Parish on the outskirts of Rome May 26. (CNS photo/Paul Haring)

VATICAN CITY (CNS) — Visiting an ordinary Rome parish for the first time as the city’s bishop, Pope Francis gave a group of children their first Communion and a catechism lesson on the meaning of the Trinity.

The pope celebrated Mass May 26, the feast of the Most Holy Trinity, outside the Church of SS. Elizabeth and Zechariah, about nine miles north of Vatican City in the Rome suburb of Prima Porta.

Pope Francis arrived at the church by helicopter shortly after 9 a.m. and went inside to hear the confessions of several people, before celebrating Mass at an altar under a canopy in front of the church. In the rural setting of rolling hills, sheep could be seen grazing in a nearby field.

“We understand reality better not from the center, but from the outskirts,” he told the several thousand people in attendance at the beginning of Mass.

Most of the pope’s short homily was addressed to the children.

“How many gods are there?” he asked. “One? But they told me that there are three: the Father, the Son and the Holy Spirit! How do you explain that?

“They are three in one, three persons in one,” he said.

“The Father creates everything, he creates the world; Jesus saves us,” the pope said. “And the Holy Spirit? He loves us!

“How does Jesus give us strength?” he asked. “In Communion.”

“Does a piece of bread give you such strength?” the pope asked. “It is not really bread. … It is the body of Jesus.”

During his 26-year pontificate, Pope John Paul II visited 317 of the 333 parishes in Rome. Pope Benedict XVI made such visits much less frequently, typically during Advent and Lent.

Also on May 26, after praying the noon Angelus from the window of his study in the Vatican’s Apostolic Palace, Pope Francis addressed the crowd in St. Peter’s Square.

Noting the beatification May 25 of Father Giuseppe Puglisi, who was killed by the Sicilian Mafia in 1993, the pope spoke of the “sufferings of the men and women, and even of children, who are exploited by the different mafias, who exploit them by forcing them into work that makes them slaves, with prostitution, and with many societal pressures.”

“Let us pray to the Lord,” Pope Francis said, “to convert the hearts of these people.”