Shelters along Mexican border strained by migrants returning from U.S. 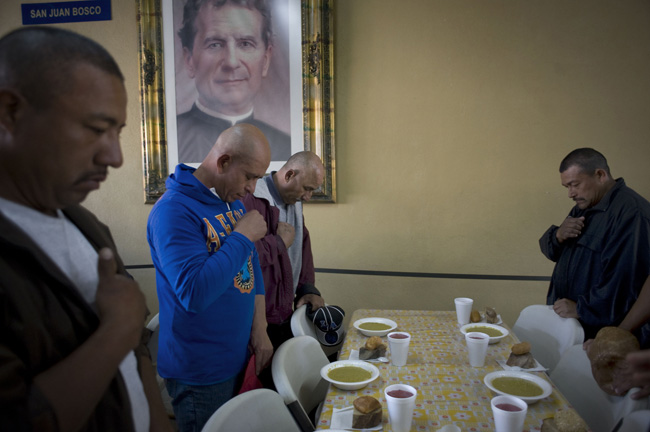 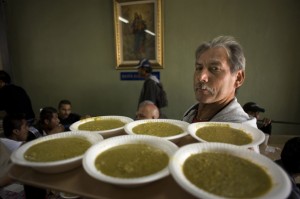 Salvador Cardenas serves split pea soup at the Padre Chava breakfast center in the border city of Tijuana, Mexico, April 19. Each day the Salesian-run kitchen and shelter serves 1,200 meals, mostly to workers who have been deported from the U.S. Cardenas had been deported that week after living in the U.S. for 22 years. He was staying and doing volunteer work at the center’s shelter. (CNS photo/David Maung)

“The (Honduran) economy is very poor so we (migrate) to get ahead,” said Bueso, who was born in San Pedro Sula, Honduras, an industrial city now considered the murder capital of the world.

Bueso is among the more than a million immigrants deported from the United States over the past five years, even as the administration of President Barack Obama presses for comprehensive immigration reform.

The wave of deportees has strained Mexican border cities, many of which already suffer from organized crime violence, and has put pressure on migrant shelters used to serving people headed north, not south.

Alberto Xicotencatl directs a Catholic-run migrant shelter in Saltillo and works closely with colleagues in the border states of Coahuila and Tamaulipas. He said they are concerned about the haphazard nature of deportations, with hundreds of deportees arriving in one border town a certain day and the same thing happening in another locale the next.

They also said the deportees are easy targets for organized crime gangs, whose members steal what little the deportees arrive with. Many deportees stick around border towns in desperate attempts to return to the U.S., said Xicotencatl. Some deportees have been in the U.S. so long that they are desperate to return, while some have only loose ties with the homes they abandoned long ago.

A report found family breakups during deportation were common, despite the stated objectives of the Department of Homeland Security to avoid such scenarios. One in four deportees was separated from an immediate family member during the deportation process, a Kino survey found.

“There are people that have all of their family in the United States and no longer feel Mexican … because they’re no longer Mexican, so they want to return (north),” Xicotencatl said.

Sister Leticia Gutierrez, director of the Scalabrini Mission for Refugees as Migrants, said deportations separate families: Often one member is sent south, and children and other relatives will remain in the United States. She also said sometimes family members are separated and repatriated through multiple ports of entry.

A report prepared for the Jesuit-run Kino Border Initiative in Nogales, Arizona, and Nogales, Mexico, with funding from the U.S. bishops’ Catholic Relief Services, found family breakups during deportation were common, despite the stated objectives of the Department of Homeland Security to avoid such scenarios. One in four deportees was separated from an immediate family member during the deportation process, a Kino survey found.

Sister Leticia echoed the shelter managers’ concern about the unpredictability of deportations.

“The way the U.S. government does deportations is very arbitrary,” Sister Leticia said. “One day they will do it at the border in Mexicali, the next at Reynosa or Matamoros” — on the other side of the country — “so there’s not a clear policy.” 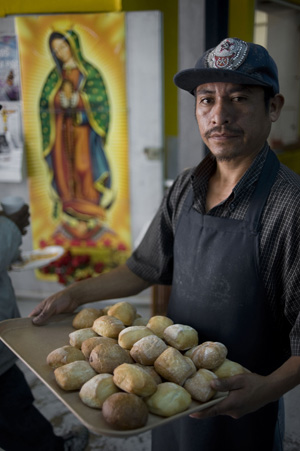 Parts of the Mexican side of the border region also present problems. The nearly 2,000-mile frontier is somewhat placid in places such as Tijuana and rife with violence and organized crime and drug cartel activities further east in Tamaulipas.

Cartels sometimes try to recruit recent deportees, Sister Leticia said. Other times, they simply rob deportees or try to extort money from their relatives still in the United States.

“There’s not an investigation into the conditions of the community that is receiving deportees,” Sister Leticia said.

The statement also said the Mexican and U.S. governments raised the idea of “reactivating” a program for repatriating Mexicans through flights to Mexico City, avoiding problematic border areas and “guaranteeing respect for rights and human dignity.”

The impact of deportations is often felt far from the border, especially as waves of Mexicans arrive back in their communities of origin and are often unable to earn more than a fraction what they made in the United States.

Many also arrive with U.S.-citizen children, who are often more accustomed to interacting and learning in English and sometimes lack the proper documents to enroll in Mexican public schools, said Ellen Calmus, director of the Corner Project in Malinalco, Mexico.

“Their (U.S.-born) children have problems in school,” said Calmus, whose organization works with migrant families in a region southwest of Mexico City.

Many potential migrants are now staying put in Mexico, instead of going north — reflected in data released last year by the Pew Hispanic Center showing the number of Mexicans returning (voluntarily or otherwise) outnumbered those leaving.

Some are staying put because of difficulties crossing the border; others do not go north due to poor economic prospects in the U.S.

The story is somewhat different in some Central American countries, where migrants often flee poverty and violence.

The Kino Border Initiative found 12 percent of Central American migrants left their countries to escape violence — nearly three times the rate of their Mexican counterparts who left for that reason.

“The impact of having so many returnees (in Central America) is to generate even more poverty than we already have,” said Father German Calix, director of Caritas in Honduras.

“The Honduran economy … depends on remittances sent by Honduras in the United States,” he added, explaining that those funds have been diminishing.

Like Bueso, some Central Americans try their luck repeatedly, even though the road through Mexico is rife with dangers such as kidnap and extortion and the United States is less welcoming than before.

“We all come to get ahead,” Bueso said while spending time at a migrant shelter in Saltillo, 190 miles south of the U.S. border at Laredo, Texas. “We’re not trying to take anything from anyone.”