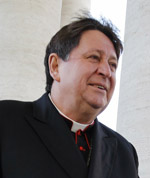 VATICAN CITY (CNS) — A day after the Vatican issued a statement saying the congregations for doctrine and for religious were united in wanting a reform of the U.S.-based Leadership Conference of Women Religious, the head of the congregation for religious repeated his call for more dialogue with the sisters.

Brazilian Cardinal Joao Braz de Aviz, prefect of the Congregation for Institutes of Consecrated Life and Societies of Apostolic Life, told reporters May 8 that he had not seen the previous day’s Vatican statement, which said the media had misinterpreted his May 5 comments to an international meeting of superiors general.

Speaking to reporters after a special papal audience attended by the sisters and himself, Cardinal Braz said the only problem he had seen with the most comprehensive news report on his remarks — in the National Catholic Reporter — concerned what he had said about the exercise of authority.

“I wanted to stress that authority cannot be domination; that authority must be a search for God’s will after having listened to what is in the heart of the other because God is speaking there. After that, the authority says what must be done and at that point, I must obey,” the cardinal said, attributing the misunderstanding to a translation difficulty at the meeting.

“There are difficulties and we must help each other clarify” the meaning and exercise of authority and obedience in the church, the cardinal told reporters.

Asked what should be done for U.S. religious women who feel hurt by the investigation of the LCWR and the earlier Vatican-ordered visitation of U.S. religious communities, Cardinal Braz said: “They must say what is in their hearts with sincerity.

“But they must also find ways, through dialogue, to say what it means to say they are ‘not interested in doctrine,'” he said, in an apparent reference to statements from LCWR leaders that the organization’s purpose is leadership development and networking, and not educating sisters in church teaching.

“This is difficult,” Cardinal Braz de Aviz said, “because for the Holy See this is a central point.”

The cardinal said wanting a dialogue means being prepared to take the Vatican’s concerns seriously. The doctrinal congregation’s assessment of the LCWR has been completed, was approved by Pope Benedict XVI, “and you have to start there, clarify that, which must be done with the archbishop of Seattle,” Archbishop J. Peter Sartain, who has been appointed by the doctrinal congregation to oversee the organization’s reform.

“There must be a relationship of trust,” he said.

The cardinal said Pope Francis’ remarks to the sisters about needing to love both Christ and the church also is essential, because “some people say, ‘Christ, yes, but the church, no.’ These points must be clarified and it’s not always easy, but you must believe in the other, trust the other. If we don’t have this relationship, we’ll get nowhere. I have to presume the other is seeking the truth and that I’m seeking it, too.”

Cardinal Braz de Aviz said that unfortunately, “relations between men and women — especially among us consecrated people — still have much maturing to do.”

Pope Francis “has such trust in us — all of us — that it’s almost frightening,” the cardinal said. “And we must use that trust well.”

NEXT: Pope tells sisters the church needs them, they need the church