Pope tells sisters the church needs them, they need the church 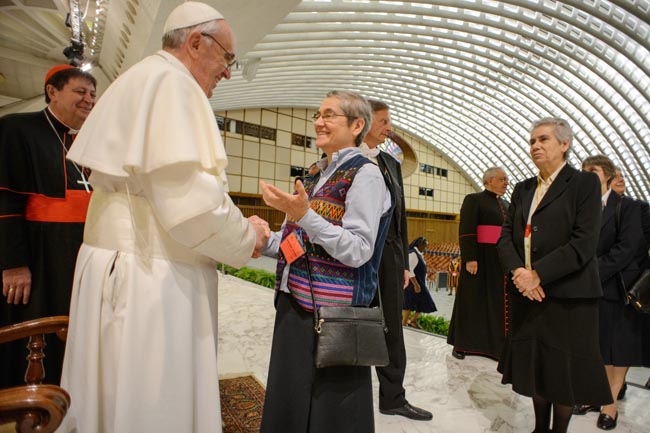 VATICAN CITY (CNS) — Pope Francis told 800 superiors of women’s orders from around the world that the Catholic Church needs religious women and that religious women need to be in harmony with the faith and teachings of the church.

“What would the church be without you?” the pope told the women May 8. “It would be missing maternity, affection, tenderness and a mother’s intuition.”

Religious superiors, Pope Francis said, need to ensure their members are educated in the doctrine of the church, “in love for the church and in an ecclesial spirit.”

The sisters, who came from 76 countries, were in Rome for the plenary assembly of the International Union of Superiors General. The group welcomed the pope with loud applause and with the ululations of the African sisters among them.

U.S. Sister Mary Lou Wirtz, superior of the Daughters of the Sacred Hearts of Jesus and Mary and president of the International Union of Superiors General, said the sisters “are very pleased with the pope, and it gives them hope of maybe some change happening in the church.”

They appreciate the pope’s emphasis on serving the poor and going out to the margins of society, “because that’s what our service as religious women is about.”

In his talk to the women, Pope Francis said their vow of chastity expands their ability to give themselves to God and to others “with the tenderness, mercy and closeness of Christ.”

However, “please, let it be a fruitful chastity, a chastity that generates sons and daughters in the church. The consecrated woman is a mother, must be a mother and not a spinster,” he said. While the sisters were laughing at his use of a very colloquial Italian word for “spinster” or “old maid,” he added: “Forgive me for speaking this way, but the motherhood of consecrated life, its fertility, is important.”

The pope said every vocation — and not just a call to the priesthood — begins with a call from God and is a call to continually center one’s life and actions on Christ, “adoring the Lord and serving others without holding anything back for oneself.”

But particularly for priests and religious, responding to that vocation means feeling, thinking and acting in communion with the church “that generated us through baptism,” he said. “The proclamation and witness of the Gospel — for every Christian — are never isolated acts. This is important,” the pope said, repeating the phrase and adding that Christians do not do good because of a “personal inspiration, but in union with mission of the church and in its name.”

For members of religious orders, the whole process of growing in love and dedication to Christ and in service of others is aided by poverty, chastity and obedience, Pope Francis said.

Embracing poverty, he said, means overcoming all temptations of selfishness and instead relying totally on God’s providence. It is expressed in simplicity and learned from living with “the humble, the poor, the sick and all those on the existential margins of life.”

“Theoretical poverty is of no use to us,” he said.

Pope Francis also praised the sisters for their focus on the meaning and exercise of authority within their communities: “We must never forget that true power, at any level, is service, which reached its highest point on the Cross.”

“Think of how much damage to the people of God has been caused by men and women of the church who are careerists, climbers, who use the people, the church, their brothers and sisters — those they should be serving — as trampolines for their personal interests and ambitions,” he said. “This does great harm to the church.”

Sister John Britta, superior of the Franciscan Sisters of the Immaculate Heart of Mary in India, said religious women “want to serve the needs of the poor with our pope and bishops. Whatever the pope says, we are ready to do.”

She said she hopes that under Pope Francis the work of women in the church will be given greater acknowledgment and that on every level of the church, people will follow Pope Francis’ example so that “authority is shared responsibility, not autocracy.”

Sister Ingeborg Mueller, superior of the Germany-based Precious Blood Sisters, said that although the papacy is only 2 months old, she has great hope that, under Pope Francis, the church will increasingly be “a church of service, a church that goes out to people and doesn’t just wait for them to come, a church where people feel welcome.”

Loreto Sister Patricia Murray, an Irishwoman who runs the religious orders’ Solidarity with South Sudan project, said there is a sense among the sisters that “we’re becoming the church again — not just an institution. Being church means we have an obligation to go out and transform that small part of the world that we can.”

PREVIOUS: Cardinal says both sides in LCWR case must be open to dialogue

NEXT: Vatican, U.S. sign deal to cooperate in fight against financial crime