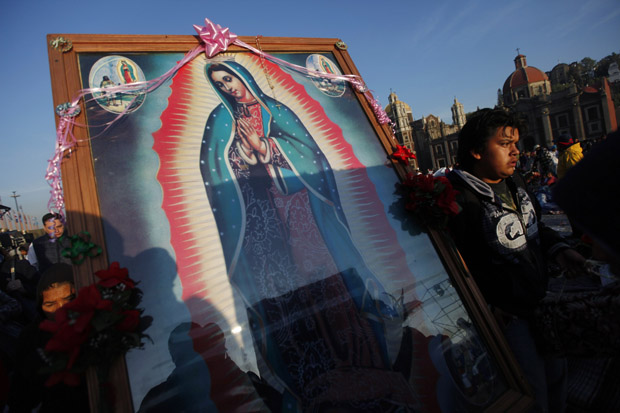 MEXICO CITY (CNS) — May is the month of Mary, who is celebrated the length of Latin America as someone more than the mother of God — or even a religious figure.

Mary is associated with everything from national identity in Mexico to the mother earth in Chile to the national patroness of many of the countries in between.

Mary has inspired independence and social justice movements, endured atheist and anti-clerical regimes and been embraced by the indigenous populations and the elites alike.

“There’s a sense (in Latin America) that Mary represents the concrete manifestation of God’s presence with us in a very culturally specific and acculturated way,” said Richard Coll, Latin America analyst for the U.S. Conference of Catholic Bishops.

Some say Latin Americans’ devotion to Mary dates back to Catholicism’s arrival from Spain, where such customs were common. But it gained acceptance — often on the terms of the indigenous populations — despite being an import brought by conquering Europeans and the missionaries who followed.

“It comes back to this role of Mary of being the acculturated presence of the religion in the sense that Mary’s involvement in the culture does not appear as one” that originated from the outside, Coll said.

“That’s where the strength comes from. Rather than feeling that parts of this religion might be external to this society, the role of Mary … (is) very local,” he said.

In Mexico City, pilgrims go daily to the Basilica of Our Lady of Guadalupe, the world’s most visited Marian shrine and the place Mary appeared to St. Juan Diego in 1531.

Blessed John Paul visited the basilica in 1979, an event symbolically important for ending the estrangement between Mexico and the Vatican. The visit also reinforced the role of Mary in the evangelization and modern life of Mexico and Latin America.

Pope Benedict XVI venerated Our Lady of Charity of El Cobre last year in Cuba, while Pope Francis plans a visit the shrine to Our Lady of Aparecida during his July trip to Brazil for World Youth Day.

Coll recalled the outpouring of devotion for Our Lady of Charity of El Cobre, patroness of Cuba, during Pope Benedict’s visit, which marked the 400th anniversary of the image’s appearance. This devotion came despite decades of state-sponsored secularism in Cuba.

Devotion to Our Lady of Guadalupe has stayed strong in Mexico, even with the church being persecuted by anti-clerical governments after the Revolution of 1910. Father Miguel Hidalgo, the priest leading the independence movement in 1810, marched with a banner bearing the image of Our Lady of Guadalupe, who is championed as a symbol of Mexican identity, even by non-Catholic Mexicans.

While being “Guadalupanos,” many Mexicans also identify with other forms of Marian devotion, including Our Lady of Zapopan, patroness of the Archdiocese of Guadalajara, and Our Lady of San Juan de Los Lagos, who is popular in western and northern Mexico.

“It’s a political thing,” Father Robert Coogan, an American priest in Saltillo, Mexico, said of the motivation for some Marian devotions in Mexico. Our Lady of Guadalupe is most popular in central parts of the country, Father Coogan said, while people in the provinces — places often resentful of the powerful national capital — express local pride through other Marian devotions. 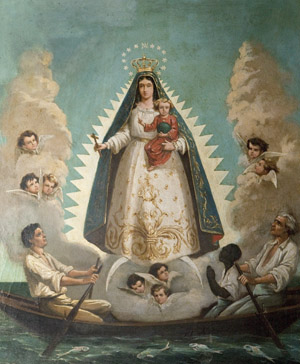 A painting of the Virgin of Charity of El Cobre is seen in a museum at the cathedral in Santiago de Cuba. (CNS file photo/Nancy Phelan Wiechec)

In some Central American countries, Mary has come under attack from evangelical leaders attempting to pry people away from the Catholic Church, said Father German Calix, country director of Caritas in Honduras.

But the devotion is hard to break because “she is in the consciousness of the people,” Father Calix said.

The consciousness is expressed often expressed in informal ways, such as the “concheros,” the Aztec dancers present at various venerations of Mary in Mexico. The thinking of Catholic leaders toward these expressions of popular piety is changing.

“There are new approaches, new concessions toward popular religion by the Catholic Church,” Father Calix said.

“(It’s) not so much as something that is of lesser quality, rather another way of living the experience of faith,” he said.

Pope Francis, as archbishop of Buenos Aires, Argentina, always supported expressions of popular piety, said Guillermo Galeano, spokesman for the Argentine Diocese of Lomas de Zamora. Many of those expressions centered on Our Lady of Lujan, the national patroness, who draws millions of Argentines to pilgrimages every October.

“It’s something that fills a spot in the soul,” Galeano said of people’s popular piety.

“Everyone lives their faith in different ways,” he added, explaining that most of the devotion is toward Mary.

In neighboring Chile, the devotion is strong enough that “even some of the ‘evangelicos’ are devoted to her,” said Carolyn Bosse, a lay Maryknoll missionary in Chol Chol, Chile.

“It seems to us that in most places, Mary has a strong connection to Mother Earth,” Bosse added.

Popular religious devotion takes on some extreme forms. In Mexico, some residents of downtrodden areas and drug dealers venerate the skeletal-looking “Santa Muerte,” or “Death Saint,” which the Catholic Church condemns as blasphemous.

It’s an example of the “homemade religion” that spread through Mexico due to church persecution of past years, which led to a shortage of priests and fomented forms of the Catholic faith being taught within families and without outside guidance, said Father Coogan.

He said focusing on Mary is natural within Mexico’s social structure, which separates elites from the “popular” classes, features little social mobility and has had “gestores” or middlemen act as intercessors between the people and their political leaders.

“In (this) structure, you get the less-important person to go to the person at the top,” Father Coogan said.

“God is unapproachable” in this context, he added. “Mary is more approachable.”

PREVIOUS: Sainthood cause of 16th-century Jesuit moves to Vatican

NEXT: Portuguese cardinal entrusts Pope Francis to Our Lady of Fatima