Sainthood cause of 16th-century Jesuit moves to Vatican 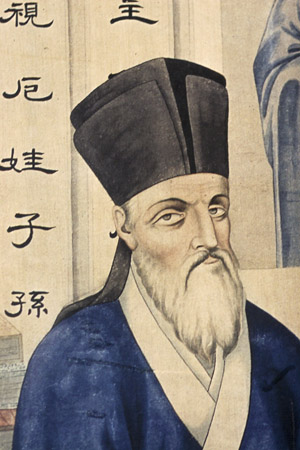 A detail from an illustration of Jesuit Father Matteo Ricci is seen at the Beijing Center for Chinese Studies in this 2007 file photo. (CNS photo/Nancy Wiechec)

VATICAN CITY (CNS) — Although it has taken more than 400 years, the sainthood cause of Jesuit Father Matteo Ricci, the 16th-century missionary to China, appears to be back on track.

Bishop Claudio Giuliodori, apostolic administrator of the Diocese of Macerata, Italy, where Father Ricci was born in 1552, formally closed the diocesan phase of the sainthood process May 10. The cause now moves to the Congregation for Saints’ Causes at the Vatican.

Bishop Giuliodori had met Pope Francis, a Jesuit, at the Vatican the first week of May. He wrote in the Macerata diocesan newspaper, “I never imagined I’d be able to speak about the cause of Father Matteo Ricci with a Jesuit pope. After the great attention given by Benedict XVI, who never missed an occasion to encourage us to promote the cause, we now have the joy of placing it into the hands of a Jesuit.”

The bishop said when he spoke to Pope Francis about the cause, the pope highlighted Father Ricci’s “innovative method of evangelization based on the inculturation of the faith” and the missionary’s courage and humility in learning from the Chinese.

Father Ricci died in Beijing May 11, 1610, and his death was followed by centuries of church debate and even disputes over the extent to which a very limited number of Confucian practices — including veneration of ancestors — could be seen as a tolerable part of Chinese social and cultural tradition rather than as religious practices incompatible with Christianity.

Marking the 400th anniversary of Father Ricci’s death in 2010, retired Pope Benedict said Father Ricci’s life and mission represented a “fortunate synthesis of proclaiming the Gospel and of dialogue with the culture of the people who are receiving it, an example of balance between doctrinal clarity and prudent pastoral action.”

Father Ricci is also known for having brought European scientific instruments and knowledge to China, opening up a scientific exchange between the two continents, the now-retired pope had said. However, Father Ricci “didn’t go to China to bring science, but to bring the Gospel, to bring God,” the pope said.

The diocesan phase of Father Ricci’s sainthood cause opened in 1984, but was almost immediately closed when questions were raised about his commitment to pure Christianity. Opened again with Vatican approval in 2010, much of the work the past three years has involved an examination by historians and theologians of Father Ricci’s writings and of the writings of those who worked with him, according to the Macerata diocesan website.

PREVIOUS: Tens of thousands march for life in Rome

NEXT: Patroness, inspiration, intercessor: Mary is beloved in Latin America