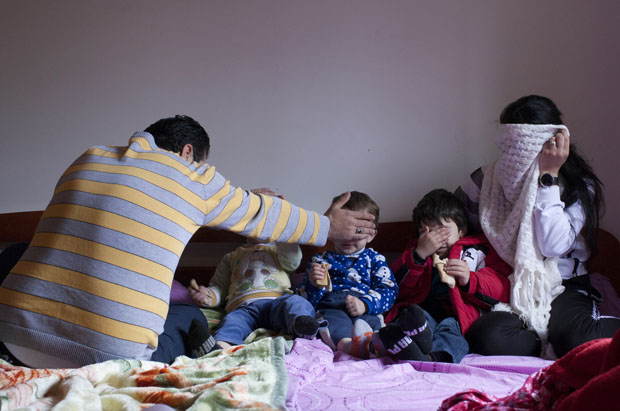 VATICAN CITY (CNS) — Meeting at the Vatican May 3, Pope Francis and Lebanese President Michel Sleiman called on the international community to offer concrete aid to Lebanon and other countries hosting hundreds of thousands of refugees from Syria.

Aides to Sleiman told reporters the president was unable to come to the Vatican for Pope Francis’ installation Mass March 19, but wanted to congratulate and speak with the new pope as soon as possible.

According to a statement released by the Vatican after the meeting, Sleiman’s discussions with the pope and, afterward with Cardinal Tarcisio Bertone, Vatican secretary of state, focused particularly on the conflict that has been raging in Syria for more than two years.

“The enormous number of Syrian refugees who have sought refuge in Lebanon and neighboring countries was a matter of particular concern,” the Vatican said. In late April, the United Nations said more than 440,000 Syrians — greater than 10 percent of Lebanon’s population — were registered as or were awaiting registration as refugees. In mid-March Sleiman said that when the number of Syrians who were staying with relatives in Lebanon was counted, their number exceeded 1 million, placing an enormous burden on the country.

The pope and president called on the international community to help provide greater humanitarian assistance to the refugees in Lebanon, Jordan and Turkey, and to the suffering people still in Syria.

The Vatican said Pope Francis and Sleiman also spoke about Lebanon’s internal affairs, including the monthlong effort of Prime Minister-designate Tammam Salam to form a government.

The new government “must confront important challenges on a national and international level,” the statement said.

For “the common good, the development and the stability of the nation,” they said, there is a need for “dialogue and collaboration among members of the different ethnic and religious communities that make up the society and are its riches.”

During the meeting, the two also spoke about how the entire Middle East would benefit from peace between the Israelis and Palestinians and about the “delicate situation” of Christians in the region. Sleiman is a Maronite Catholic.

At the end of their audience, the Lebanese president gave Pope Francis a 19th-century Marian iconographic triptych. The pope helped the president hold it up, opened, to show the reporters and photographers covering the audience.

PREVIOUS: Pope: People have guts to be ambitious; instead, be courageous for God

NEXT: In Mary’s month, Pope Francis prays at ancient Basilica of St. Mary Major in Rome