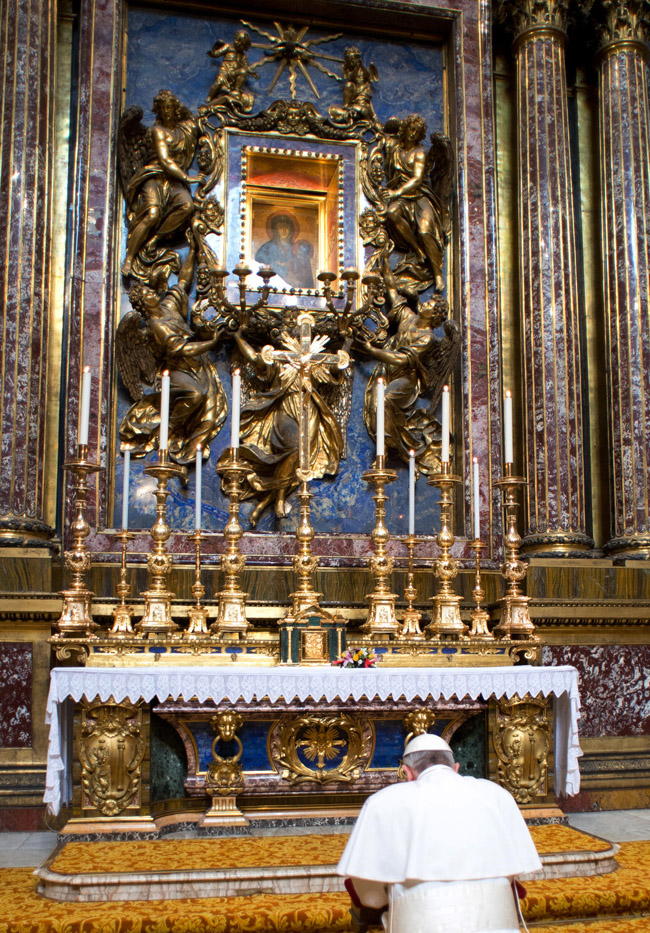 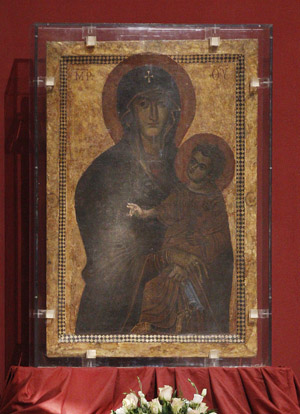 The icon of Mary, Salvation of the Roman People, is seen during a Marian prayer service at the Basilica of St. Mary Major in Rome in this May 26, 2011, file photo. (CNS photo/Paul Haring)

ROME (CNS) — The first of Rome’s four major basilicas to receive a visit from Pope Francis after his election March 13 was not the closest one, St. Peter’s, which sits under the “Loggia of the Blessings” from which the new pontiff first appeared to the world.

Instead, at 8 the next morning, in a gesture not indicated by papal protocol, Pope Francis rode two-and-a-half miles across town from the Vatican to the Basilica of St. Mary Major, the oldest church in the West dedicated to the mother of Jesus.

The pope returned to the basilica May 4 to pray the rosary in observance of May as the traditional month of Mary.

The first church on this site on the Esquiline Hill was built during the pontificate of Pope Liberius (352-366). According to legend, its construction was inspired by a miraculous snowfall here in the early morning hours of Aug. 5. That event is commemorated every year on the same date when, during Mass, white rose petals fall like snow from an opening in the coffered ceiling.

St. Mary Major’s most famous relic, under the main altar, is wood believed to come from the “Holy Crib” that held the infant Jesus.

St. Ignatius of Loyola, frustrated in his plan to travel to the actual site of the Nativity in Bethlehem, celebrated his first Mass in the basilica in 1538. For Pope Francis, the first Jesuit pope, that connection with the founder of his order gives St. Mary Major great personal significance.

The basilica also has a link with the pope’s namesake, St. Francis of Assisi, who is believed to have invented the Christmas manger scene as an aid to prayer. Fragments of one of the oldest extant Nativity scenes, by the 13th-century sculptor Arnolfo di Cambio, are preserved here.

The focus of the pope’s first visit to St. Mary Major was the icon of Mary “Salus Populi Romani,” which is literally translated as “health (or salvation) of the Roman people.” According to tradition, this image of Mary embracing Jesus as a young boy was the work of the evangelist St. Luke, who painted it on a tabletop made by Jesus himself in St. Joseph’s carpentry shop. Many centuries later, Jesuit missionaries distributed reproductions of the image to promote Marian devotion around the world.

On his first morning as pope, Pope Francis knelt and prayed before the icon for several minutes and left behind a bouquet of flowers. Since then, he has affirmed his devotion to Mary in other ways.

While greeting dignitaries after his Mass of inauguration March 19, the pope reportedly told Brazilian President Dilma Rousseff that his visit to her country in July will feature a pilgrimage to the shrine of Our Lady of Aparecida, the principal patron saint of Brazil.

The pope also has asked the bishops of Portugal to consecrate his pontificate to Our Lady of Fatima, which the bishops were scheduled to do on the feast of Fatima, May 13.

“I wish to go and pray to Our Lady, that she may watch over all of Rome,” Pope Francis told the world on his election night.

The ancient icon in St. Mary Major has been used by several popes to invoke the saint’s protection for Rome. St. Gregory the Great, pope from 590 to 604, is said to have carried it through the city to pray for an end to an outbreak of plague.

Yet, just as the bishop of Rome is also pastor of the universal church, the cult of Mary as the city’s protector extends far beyond the city’s ancient or modern limits, and her graces include more than physical health.

As art historian Elizabeth Lev notes, the icon sits under an early 17th-century fresco that portrays Mary and St. John the Evangelist coming to the aid of writhing bodies bitten by the “poisonous serpents of heresy.” 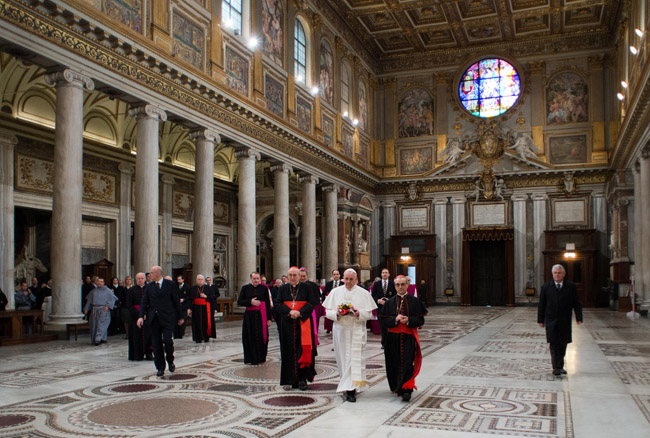 Pope Francis carries flowers to place in front of an icon of Mary, Salvation of the Roman People, as he arrives at the Basilica of St. Mary Major in Rome March 14, the morning after his election. The pope prayed the rosary at the basilica May 4. (CNS photo/L’Osservatore Romano)