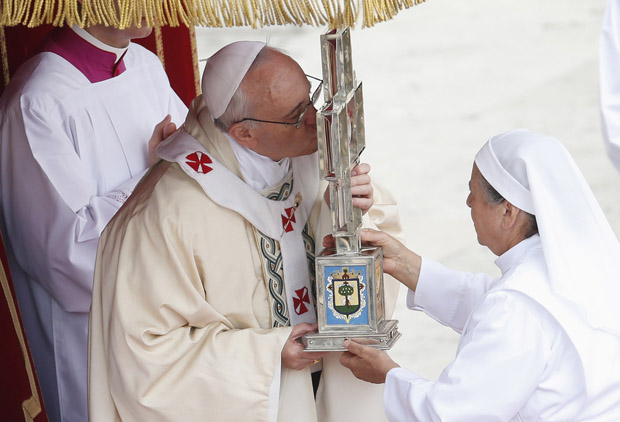 Pope Francis kisses the relics of blessed Maria Guadalupe Garcia Zavala, also known as “Madre Lupita,” the Mexican co-founder of the Handmaids of St. Margaret Mary and the Poor, during her canonization Mass at the Vatican May 12. (CNS photo/Tony Gentile, Reuters)

VATICAN CITY (CNS) — Pope Francis warned against “gentrification of the heart” as a consequence of comfortable living, and called on the faithful to “touch the flesh of Christ” by caring for the needy.

The pope’s words came in a homily during Mass in St. Peter’s Square May 12, when he canonized the first Colombian saint, as well as a Mexican nun and some 800 Italians martyred by Ottoman Turks in the 15th century.

Mexico’s St. Maria Guadalupe Garcia Zavala (1878-1963), the pope said, gave up a “comfortable life to follow the call of Jesus, taught people to love poverty, in order the more to love the poor and the sick.”

“How much damage does the comfortable life, well-being, do,” the pope added, looking up from his prepared text. “The gentrification of the heart paralyzes us.”

The Mexican saint, known as Mother Lupita, “knelt on the floor of the hospital before the sick, before the abandoned, to serve them with tenderness and compassion,” and in doing so, “touched the flesh of Christ,” he said. 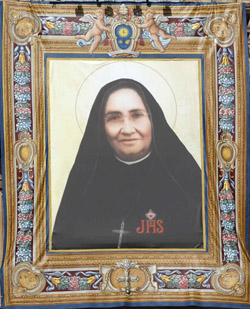 The tapestry of blessed Maria Guadalupe Garcia Zavala, hangs on St. Peter’s Basilica during her canonization Mass at the Vatican May 12. (CNS photo/Stefano Rellandini, Reuters)

Pope Francis said the Mexican founder of the Handmaids of St. Margaret Mary and of the Poor sets an example for everyone “not to retreat into oneself, into one’s own problems, into one’s own ideas, into one’s own interests in this little world that has done us so much damage,” but to share God’s love with the needy “through gestures of delicacy and sincere affection and love.”

The pope also praised St. Laura Montoya (1874-1949), the “first saint born in the beautiful land of Colombia,” as a “spiritual mother of the indigenous peoples, in whom she infused hope” and taught about God in a way that “respected their culture and was not opposed to it.”

“Mother Laura” founded the Missionary Sisters of Mary Immaculate and St. Catherine of Siena, who today “live and bring the Gospel to the most remote and needy places, as a kind of vanguard of the church,” he said.

“She teaches us to see the face of Jesus reflected in the other,” the pope said, “to overcome indifference and individualism, welcoming everyone without prejudice or constraints, with love, giving the best of ourselves and above all, sharing with them the most valuable thing we have, which is not our works or our organizations” but “Christ and his Gospel.” 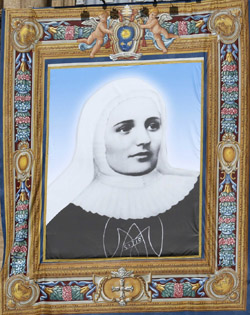 The tapestry of blessed Mother Laura Montoya, the Colombian founder of the Congregation of the Missionary Sisters of Mary Immaculate and of St. Catherine of Siena, hangs on St. Peter’s Basilica during her canonization Mass at the Vatican May 12. (CNS photo/Stefano Rellandini, Reuters)

Pope Francis also paid tribute to the approximately 800 people in Otranto, southern Italy, who in 1480 were decapitated by invading Ottoman forces for refusing to convert to Islam.

“Where did they find the strength to remain faithful?” the pope asked. “Precisely in faith, which allows us to see beyond the limits of our human eyes, beyond the boundaries of earthly life, to contemplate the ‘heavens opened,’ as St. Stephen said.”

The pope then prayed for “those many Christians who, in these times and in many parts of the world, right now, still suffer violence,” and asked God to “give them the courage and fidelity to respond to evil with good.”

Before praying the “Regina Coeli” at the end of Mass, Pope Francis called on the Otranto martyrs to “help the beloved Italian people look with hope to the future,” and invoked the intercession of the new Mexican and Colombian saints in bringing peace to their troubled homelands.

Colombian and Mexican pilgrims, waving or wearing their countries’ flags, were notable in the crowd filling the square on the sunny Sunday morning.

All the day’s news saints “pose questions to our Christian life,” the pope said at the conclusion of his homily, which he delivered in a mix of Spanish and Italian. “How am I faithful to Christ? Am I able to show my faith with respect, but also with courage? Am I attentive to others? Do I recognize when someone is in need? Do I see in everyone brothers and sisters to love?”