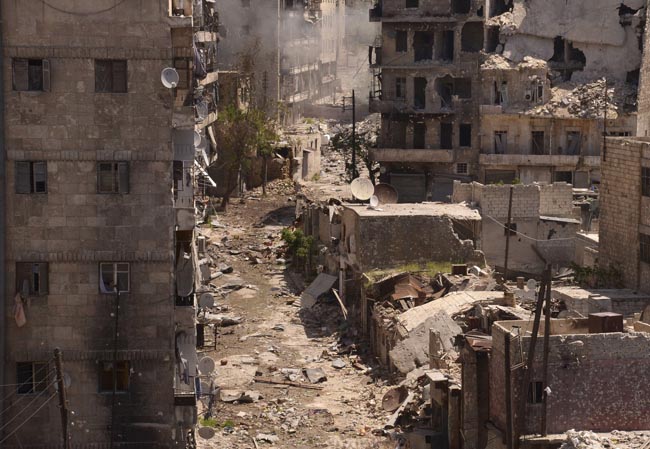 Destroyed buildings are seen in the Old City of Aleppo, Syria, April 29. The Syriac Catholic patriarch said events in Syria were the result of Western nations carrying out a geopolitical strategy "to split Syria and other countries" in the Middle East. (CNS photo/George Ourfalian, Reuters)

BEIRUT (CNS) — The Syriac Catholic patriarch said events in Syria were the result of Western nations carrying out a geopolitical strategy “to split Syria and other countries” in the Middle East.

“It’s not a question of promoting democracy or pluralism as the West wants us to understand of its policies. This is a lie, this is hypocrisy,” Syriac Patriarch Ignatius Joseph III Younan told Catholic News Service.

Western nations did not heed warnings and so “bear responsibility for what is happening in Syria.”

“We were warning all those involved, the countries in the region and in the West — that means the United States and some of the European Union countries, like the United Kingdom and France — that this kind of violence would lead to chaos and the chaos to a civil war,” Patriarch Younan said. “And at that time, two years ago, they chose not to believe that.”

The patriarch spoke to Catholic News Service May 10, as Western nations gave contradictory reactions to the war between the regime of Syrian President Bashar Assad and rebel forces.

The United States and Russia were calling for an international conference on Syria in Geneva at the end of May, but U.S. President Barack Obama was said to be considering arming rebel groups as war intensified in certain parts of Syria.

“Since the beginning, they (Western nations) just stood against the regime, calling it a dictatorship, saying the dictatorship must fall. Now it’s over 25 months, the conflict is getting worse, and the ones who are paying the price are the innocent people,” said Patriarch Younan, leader of nearly 40,000 Syriac Catholics in Syria.

He said the morale of Christians in Syria is “very, very low.”

Patriarch Younan, who served for 14 years as bishop of the New Jersey-based Diocese of Our Lady of Deliverance for Syriac Catholics in the United States and Canada, was elected patriarch of the Syriac Catholic Church in January 2009. He and other Eastern Catholic patriarchs in Lebanon have repeatedly warned against toppling Assad, calling instead for dialogue to solve the crisis in the country.

The patriarch emphasized that “we are not siding either with Assad or with his regime. We are with the Syrian people, and our concern is how can we get this country (Syria) back on its feet for the sake of the population.

“We are accused of siding with the (Syrian) regime. This is not the truth,” he said. “Sure, we did say from the beginning, this regime has to make reforms, true reforms, both political and in the area of civil liberties.”

But the patriarch said that does not mean ousting the regime is the solution, because it could then be replaced with fundamentalist groups, as church leaders had warned, citing Libya and Egypt and other countries of the Arab Spring.

“We are not politicians,” the patriarch said. “We just want our people to be able to stay in their own country and to live peacefully with others, and we want true civil rights and religious liberty.”

He said Western nations must looked at what happened in Iraq, which still suffers from confessional conflicts, killings, bombings and kidnappings and has already experienced the exodus of more than 50 percent of its Christians.

The patriarch described the situation in his native province of Hassake as “very critical” and said Christians were being pressured to leave the area.

“People live in fear. They fear kidnapping and killing, and many of the Christians just want to get out in whatever way they can,” he said.

“It’s very sad to say that there is no hope for the future for the young generations, all because of the lasting conflict, and the West bears the responsibility of this conflict.”

He said Western nations encouraged conflict in the Mideast “in the name of the so-called awakening of people, of democracy,” adding that “the so-called Western democracy” cannot be exported to countries that still look at religion as a base for ruling their regimes or political life.”

Those attempts over the past 20 years to bring so-called democracy in the region, he said, instead were not for the good welfare of the Christians in the Middle East and “were very much harming our very existence.”

“And for us Middle Eastern Christians, the faith means a lot. For us, religious liberties come first, otherwise we would not have been surviving for centuries in this area. Western leaders don’t want to understand this,” Patriarch Younan said.

“Christians in the Middle East have been not only abandoned, but we have been lied to and betrayed by Western nations, like the United States and the European Union,” he said.

“And I believe there will be a time coming when the Christians of the Middle East will no longer look to the West for support and perhaps to better strengthen their roots with the Eastern culture and civilization. They are better to look to the East, to … Russia, to India, to China,” he said.

The patriarch said he had no news of two Orthodox bishops kidnapped April 22, but said the United States was “very able to get the news if they want to.”

When asked if he considered the bishops’ kidnapping a message to Christians, the patriarch replied, “How can it be otherwise?” The incident, he said, makes Christians in Syria more fearful and desperate to flee.

“We keep praying for peace and the liberation of all kidnapped,” he added.

The number of Syrian refugees in Lebanon already is more than 1 million, equal to one quarter of Lebanon’s population. Every day, Patriarch Younan said, Christian families from Syria who have left everything behind, come to the patriarchate in Beirut seeking refuge.

NEXT: Tens of thousands march for life in Rome