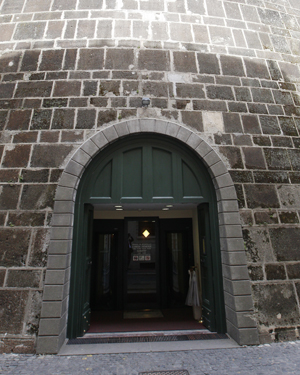 The main entrance of the Institute for the Works of Religion, known colloquially as the Vatican bank, is seen at the Vatican May 31. Ernst von Freyburg, president of the bank, said its operations are sound but “our biggest issue is our reputation.” (CNS photo/Paul Haring)

VATICAN CITY (CNS) — In the popular imagination, the Vatican bank is so shady that even the German businessman appointed its president in February thought his task would be “cleaning out and dealing with improper deposits.”

But Ernst von Freyberg, president of the Institute for the Works of Religion, the formal title of the bank, told Vatican Radio and several other news outlets that it turns out “our biggest issue is our reputation.”

“We haven’t rendered a good service to the Holy Father with the reputation we have,” Von Freyberg told Vatican Radio in an English-language interview aired May 31. “My dream is that our reputation is such that people don’t think of us any more when they think about the Vatican, but that they listen to what the pope says.

“When I came here I thought I would need to focus on what is normally described as cleaning out and dealing with improper deposits,” he said. “There is — until now — nothing I can detect.

“We are a well-managed, clean financial institution,” Von Freyberg said. “It is the right of every member of the Catholic Church around the world to be well informed about this institution,” which is why the Vatican bank has decided to publish an annual report beginning Oct. 1.

While the institute accepts the deposits of church personnel, religious orders and institutions, invests their money in conservative bonds, pays them interest and will transfer their funds to projects around the world, it does not lend money and so is not technically a bank, he said.

The Institute for the Works of Religion has 19,000 customers — all of which are being reviewed — and makes a profit of 50 million-70 million euros ($65 million-$90 million) each year, he said. The institute’s annual operating cost is about 25 million euros.

“The IOR is highly capitalized; it has an equity of roughly 800 million (euros) on a balance sheet of 5 billion (euros),” Von Freyberg said. “During the financial crisis we were never in trouble. No government had to bail us out. We are very, very safe.”

Von Freyberg said that 15 years ago the institute was “probably very normal” with its policy on secrecy and on monitoring account activity. But after the 9/11 terrorist attacks in the United States and the more recent global financial crisis, international banking standards have become more rigorous to prevent money laundering, terrorist financing and tax evasion.

“That process started naturally with the biggest banks in the world and now has reached the tiniest bank or institute in the tiniest state” — the Vatican, he said. “We were late in adapting to this new world; now we are running to catch up and to be where we were 15 years ago — relatively normal compared to other financial institutions.”

In such a highly specialized international financial and legal environment, Von Freyberg said he has hired Promontory Financial Group, “probably the world-leading anti-money laundering consultancy, to review every single one of our accounts and to review our structures and processes for detecting money laundering.” He also has hired a global legal firm to help the Vatican understand and comply with evolving global regulations, he said.

Rene Brulhart, the Swiss finance lawyer hired to monitor the legality and transparency of all Vatican financial activity, including the bank, told reporters May 22 that six “suspicious activity reports” were forwarded to him in 2012.

Von Freyberg told Vatican Radio the reports do not certify “wrongdoing; it is suspicion and it proves that our internal monitoring system starts to work.” The reports signal concerns that those six transactions were unusual and “might be inappropriate,” he said.

In his role as president, Von Freyberg was expected to be in Rome for meetings one or two days a week with the Vatican bank’s director and staff, as well as for occasional meetings with its commission of five cardinals and board of lay supervisors.

Right now, he said, he is at the Vatican three days a week and is living in the Domus Sanctae Marthae, the Vatican guesthouse where Pope Francis also lives.

“A normal day starts in the most extraordinary way,” he said, because “I am allowed to occasionally attend Mass with the pope. That itself is a privilege.”

PREVIOUS: On the hills of the West Bank, building the good life for Palestinians