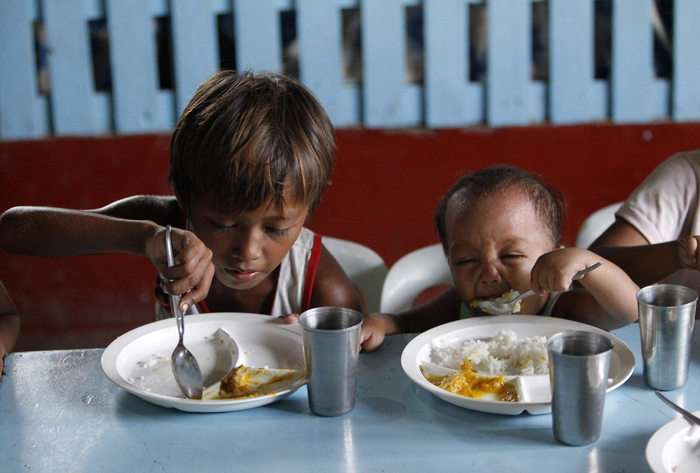 A boy and his younger brother eat their free meals May 22 during a feeding program at a slum area in Manila, Philippines. Archbishop Francis A. Chullikatt, permanent observer of the Holy See to the United Nations, told a U.N. General Assembly meeting May 23 that it was urgent to resolve the "ongoing scandal" of hunger in today's world. (CNS photo/Romeo Ranoco, Reuters)

UNITED NATIONS (CNS) — Finding a solution to the “ongoing scandal” of worldwide hunger should be a top priority, said the Vatican’s representative to the United Nations.

Addressing a U.N. General Assembly meeting on sustainable development goals May 23, Archbishop Francis A. Chullikatt, permanent observer of the Holy See to the United Nations, called it “a shame that so many of the poor people in the world continue to find themselves helpless victims of chronic hunger.”

He urged the U.N. to find “sustainable models of food security and nutrition” to end hunger for nearly 1 billion people worldwide particularly when the international community can “produce sufficient food for every human being.”

He also described world hunger and malnutrition as “all the more egregious when we grasp the reality that malnutrition remains the world’s biggest health risk — claiming more victims each year than HIV/AIDS, malaria and tuberculosis combined.”

The archbishop called the lack of access to adequate food and nutrition “a moral and humanitarian crisis exacerbated by manmade policies and practices” such as failing to provide access to markets for producers in developing countries, diverting food resources from consumption to energy production, waste of food resources and armed conflicts.

“In face of the world’s hungry, the grotesque spectacle of foodstuffs being forcibly destroyed in order to preserve higher market prices for producers, primarily in developed countries, constitutes a reprehensible practice which prioritizes economic profit over the needs of those starving,” Archbishop Chullikatt said.

He said ending hunger — which can be addressed today — is not the same as providing better health care, which often depends on “looking toward technologies or cures yet to come or not currently available.”

“Hunger is one of the world’s most solvable problems,” he added, pointing out that “per capita food production has steadily risen and total world food production now exceeds what is needed to give every person sufficient food and nutrition.”

He also suggested that governments “introduce effective programs and policies that ensure food and nutritional security for their people” that would particularly provide assistance to children, pregnant women, the disabled, the elderly and those affected by natural disasters.

“A sustainable development goal for the elimination of hunger is not only a clear necessity but it is also a moral imperative,” he stressed.

The archbishop also addressed the importance of access to water during the May 24 U.N. session on sustainable development goals by pointing out that more than 800 million people lack access to a water resource and millions more are without a safe and sustainable water supply.

He said the Vatican delegation has been advocating for more than a decade to change this situation “but collective efforts on the part of governments and international organizations are slow and hesitant in reaffirming that access to safe water and sanitation is a fundamental human right and a common good.”

Archbishop Chullikatt said access to water “goes beyond national borders and requires international cooperation in governance so as to promote a harmonious, sustainable use of natural resources.”

He also pointed out that it is not enough just to provide more water; people also need to realize that water is not an unlimited resource.

NEXT: For Jesuit, Syrian war is professional challenge, personal heartache