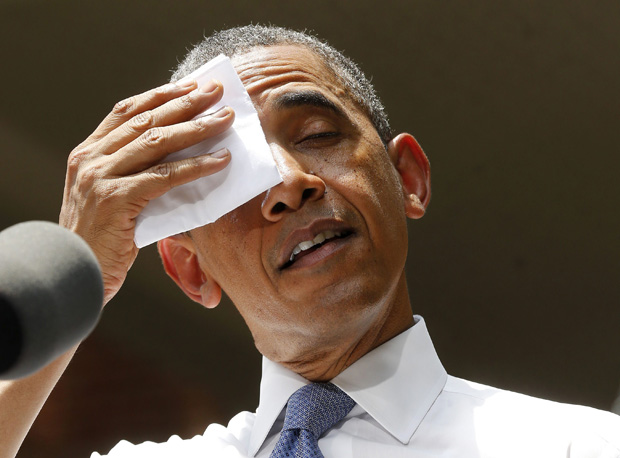 U.S. President Barack Obama pauses and wipes his forehead as he talks about his vision to reduce carbon pollution June 25 during a speech at Georgetown University in Washington. (CNS photo/Larry Downing, Reuters)

WASHINGTON (CNS) — Catholics working for environmental justice welcomed President Barack Obama’s plan to address climate change, saying it is an ambitious proposal that deserves watching to ensure that it is carried out.

The primary concern identified by the faith-based environment advocates revolves around how the plan will affect low-income communities around the world and workers who may be displaced because of the shift toward renewable energy sources.

“It seems ambitious and it seems like it’s hitting all the right notes in terms of meeting some basic moral criteria that the bishops have,” Dan Misleh, executive director of the Catholic Coalition on Climate Change, told Catholic News Service June 25.

“But the proof will be in the pudding to see if the administration can be sure these plans don’t add additional burdens to poor people,” Misleh said.

“It’s nice to see the administration doing something significant about climate change. … The question for Catholics (is), ‘Are we promoting our economic good or are we promoting the common good?'”

Introduced during a speech at Georgetown University, Obama’s plan places tighter limits on power plant emissions and stresses the importance of meeting the country’s growing electrical demand through renewable energy sources. It also calls for upgrades to the country’s electrical grid.

“What is true, we cannot just drill our way out of the energy and climate challenge we face.”

Obama said to ignore climate change would be disastrous for poor people today as well as for future generations. He challenged members of Congress who refute scientific evidence that points to the burning of fossil fuels as the reason for rising temperatures around the globe.

“I don’t have much patience for anyone who denies that this problem is not real,” the president said.

Obama pledged that the United States would take a leadership role in reducing greenhouse gas emissions to serve as an example for the rest of the world and to continue working with leaders in Brazil, China and India — major emerging economies — on clean energy initiatives.

Much of the plan can be implemented through executive orders and policy initiatives without the need for congressional action.

Patrick Carolan, executive director of the Franciscan Action Network in Washington, told CNS that he was pleased to see the president address climate change as a moral issue. Citing disagreements in whether climate change is an issue, Carolan called for bipartisan support in Congress and throughout the country for the plan.

“It’s not just an environmental issue or a climate issue, it’s an issue of ethics. Any steps taken must be a measure of the social costs involved, not just economic costs,” Carolan said.

“The United States must take leadership on these issues to protect the poor in other countries,” he added.

Franciscan Father Jacek Orzechowski, parochial vicar of St. Camillus Parish in Silver Spring, Md., who has been involved in environmental work throughout much of his priesthood, said he was moved by Obama’s speech and its parallels to the messages of Blessed John Paul II, Pope Benedict XVI and Pope Francis.

“It was a political speech but with strong moral, spiritual values,” he told CNS June 25 after a series of meetings with elected representatives on Capitol Hill to discuss climate issues.

“President Obama deserves a great deal of credit for taking steps to address the threat of climate change,” he added. “The plan that he proposed to reduce carbon dioxide emissions, mercury especially from coal-fired power plants, is a huge step to protecting human rights, especially for children, unborn children and caring for God’s creation.”

The Columban Justice and Peace Office called the Obama plan “a step in the right direction” but urged that more to be done to ensure that proposals for using alternative energy not harm people or the environment.

“We support his measures aimed to decrease dependency on fossil fuels in the U.S. and abroad while planning for climate mitigation, resiliency, and ecosystem protection,” said the program’s Chloe Schwabe.

“We are concerned that some of the alternative energy proposals will harm God’s people and all creation, such as food-based biofuels that contribute to unstable food prices, nuclear energy which is toxic to produce and dispose of, and hydraulic fracturing which depends on the use of untested chemicals. We will continue to call for climate change and energy policies that restore right relationships for all of creation for generations to come,” she said.

Meanwhile, Christian Brother Kevin Cawley, meeting at the United Nations, told CNS in an email that initial reports from representatives of poor countries “are not hopeful.”

He pointed to the need for the U.S. and other developed countries to take stronger action to mitigate the impact of climate change on poor people around the world.

“The developed countries, the rich countries, must now take action. The transition to renewable sources of energy must be moved to first position. And each citizen at some point will be visiting the challenge of to what extent am I complicit by my life choice in the increased consumption of fossil fuels,” he explained.

NEXT: Salt+Light uses Internet to send Chinese programming to mainland