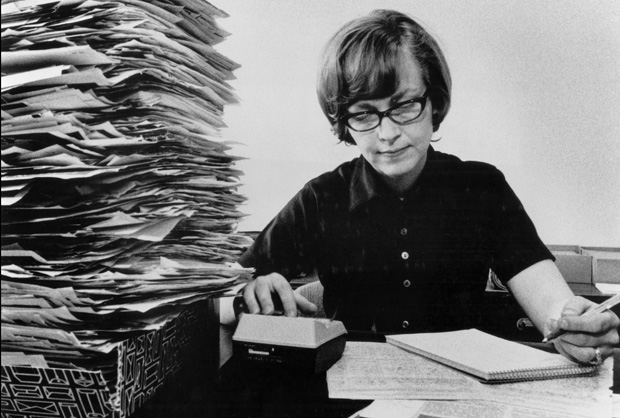 Worker tabulates petitions calling for an amendment to the Constitution to protect the unborn in March 1973 at the office of Our Sunday Visitor in Huntington, Ind. (CNS file photo)

NOTRE DAME, Ind. (CNS) — In 1973, many people thought the U.S. Supreme Court’s Roe v. Wade decision would resolve the abortion debate, but “in fact, it was no resolution at all,” said the associate director of the U.S. bishops’ Secretariat for Pro-Life Activities.

“Abortion itself remains perhaps the most unresolved of all modern public issues,” Richard Doerflinger told participants in the Notre Dame Vita Institute.

The decision raised more questions than it answered about the status of unborn human beings — both inside and outside the context of abortion — Doerflinger said in a June 19 lecture in which he analyzed 40 years of pro-life efforts since the high court legalized abortion on demand with its Roe ruling.

The historic abortion decision and its companion ruling in Doe v. Bolton, also opened debate about the legal status of other vulnerable humans already born, including handicapped, elderly and terminally ill persons.

“In short, it (Roe) has forced us to confront the question of whether human life in general has dignity and inherent value simply because it is human life,” he said, “or whether life has a sliding scale of value and can be set aside or diminished, depending on the apparent usefulness or burdens of that life.”

Roe v. Wade and the national debate on abortion have raised the question of “who has a right to life (and who, therefore, has any human rights at all), and on what basis?” Doerflinger said. Thus, Roe v. Wade has affected other important life issues, including the legal status of immigrants, society’s obligation to support the poor and needy, and whether there is a justification for capital punishment.

“As our Catholic teaching recognizes, the right to life may not be our supreme right — religious freedom is our supreme right because it allows us to have a relationship with God — but it is our most basic one, the one without which all other rights are meaningless,” he said.

In discussing the history of Roe and related court decisions, Doerflinger said the Supreme Court has not backed down from the essence of its original ruling, but there has been plenty of activity around the abortion issue with some setbacks and some successes. Those successes have been “hard won,” he said, and “especially today are constantly in danger of being reversed.”

One area of success has been in conscience, giving health care personnel and institutions the right, without penalty or discrimination, to refuse to participate in procedures they consider immoral.

Until two years ago, there was bipartisan agreement that such conscience protection was appropriate, Doerflinger said, but “that long tradition is under attack today,” especially since the Affordable Care Act was passed in 2010.

“That fight on conscience has become the center of some dozens of lawsuits,” he continued. “It is part of a new trend, beginning in the second half of President Obama’s first term, in which the federal government has turned sharply against the idea of conscience rights on abortion and similar topics for the first time since Roe was decided.”

Another area of pro-life success has been federal funding of abortion, Doerflinger said. He cited the Hyde amendment, first passed by Congress in 1976, as “one of the great victories of the pro-life movement.” That legislation prevents funding of abortion in Medicaid, and he said that its basic policy has been replicated in every subsequent major federal health program.

“However, on funding as well as on conscience, decades of hard-won progress are now being contested,” Doerflinger said.

He explained that the Affordable Care Act “departs from a decades-long consensus about federal funding of abortion, in at least two ways.”

First, it is its own appropriations bill, so it bypasses the usual appropriations bills covered by the Hyde amendment, he explained. Second, the act violates longstanding policy under Hyde that federal funds cannot be used to subsidize any part of a health plan that includes elective abortions, he said.

Doerflinger also cited some progress in protecting unborn children outside the context of abortion, citing some federal and state laws that assist pregnant women and protect unborn children and recognize them as having certain legal standing. However, even with that legal standing, the unborn still are vulnerable to abortion.

“Now the courts have repeatedly and firmly said the law can treat (unborn children) as persons — unless it is a matter of abortion,” Doerflinger said. “This is a beautiful example of absolutely circular reasoning, and it demonstrates the intellectual poverty of the court’s decisions more than almost anything else.”

Doerflinger said that the challenge now is to persist in working for respect of all human life by trying to limit and regulate abortion, by giving pregnant women more positive solutions, by preventing the rationale of Roe from endangering other classes of vulnerable people, and by working to have the Supreme Court admit that Roe v. Wade was an attack on the most fundamental liberty of all.

“It is my hope and my conviction that a future world will look upon our society’s lack of respect for the unborn child, as well as the handicapped and terminally ill, as a massive blind spot, an aberration in a society striving in other ways to be good, just as slavery or racial discrimination or the low status of women were the blind spots of an earlier time,” Doerflinger concluded.

The Notre Dame Vita Institute is a two-week summer program of formation for young pro-life leaders that is co-sponsored by the University of Notre Dame’s Fund to Protect Human Life and the Notre Dame Center for Ethics and Culture.