Listening with heart gives one courage to tell truth of faith, nun says 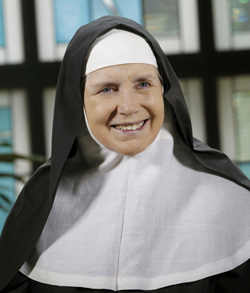 DENVER (CNS) — Listening with one’s heart is a skill that’s needed not only by monastics but by those working in Catholic media so that they have the courage to tell the truths of the faith, Mother Dolores Hart told Catholic media professionals gathered in Denver.

The Benedictine nun was an actress who left Hollywood in the early 1960s to become a cloistered nun.

“In contemplative life, you meet friends, you meet people, you’re there to be a servant to those who are ill and to listen — that’s the key word,” she said June 20 to a crowd of about 400 Catholic journalists and others at the Catholic Media Conference. “You are listeners. You are the people who have to go into all the situations of the world.”

Mother Dolores said that leaving her monastery to promote her new book, “The Ear of the Heart,” was like seeing a movie in color for the first time.

But the promotional tour also has awakened her to some of the harsh realities the Catholic Church is facing in modern-day society, added the nun, who is still a voting member of the Academy of Motion Picture Arts & Sciences.

Telling the truth means that media professionals must overcome the temptation to be shrewd and secretive, she added.

“I would ask you to listen to yourself, to know who you are in the church and to trust it, because the church needs you. You’re going to have to go through a lot to do what you know in your heart must be done,” Mother Dolores said.

But she promised the journalists that she and the nearly 40 other nuns at Regina Laudis Abbey in Bethlehem, Conn., would support Catholic journalists with their prayers.

“When I go home, I’m going to tell them ‘we’re going to pray for these folks. They’re going to be our special concern,'” Mother Dolores said.

She also recounted the rather convoluted path she took to the monastery and how her life’s journey illustrates God’s ability to speak to people in a way they can understand.

A child of divorced parents, Mother Dolores was largely raised by her grandmother, a waitress who scraped by but sent young Dolores to a Catholic school on Chicago’s North Side so that she wouldn’t have to cross the railroad tracks.

She was not raised a Catholic, but her decision to join the church was prompted initially, she said, by a desire to get the same sweet rolls and chocolate milk the Catholic children enjoyed each morning after Mass.

“I think from a very early age, the mysteries of the church were new to me, and I learned to understand that there’s a constant listening to find out what it is we are called to do,” she said.

Leaving her promising acting career to join Regina Laudis did not mean that all of her questions were resolved, Mother Dolores said.

“I cried myself to sleep every night for the first seven years. I said, ‘What am I doing?'”

But over time, she not only persevered in her vocation but implemented a new program of monastic education at Regina Laudis and now serves as prioress.

Proceeds from the sale of her new book will go toward renovating and expanding the monastery to accommodate new vocations.

Ambuul is assistant editor of The Colorado Catholic Herald, newspaper of the Diocese of Colorado Springs, Colo.